My Life in the Computer History Museum

My Life in the Computer History Museum

Its been six or eight years since I’ve taken a group of students to the Computer History Museum, and am I ever glad that I made the stop this time. The museum has changed a lot over the years and this was by far the best visit ever.

The first part of the “ancient” history of computing (up to the late 1970’s) was really well done, but I noticed that I couldn’t stop myself from snapping pictures of computers from then on. I realized that I was in fact taking pictures of the machines that I have personally worked on or used for fun over the years. 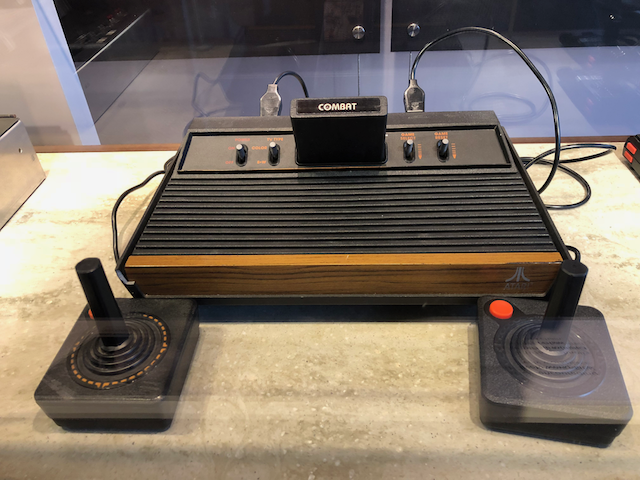 Did you ever play tank battle on one of these? I think its safe to say that this was the first game console I ever used. Notice the lovely woodgrain finish, and the switch to change between black and white and color TVs! 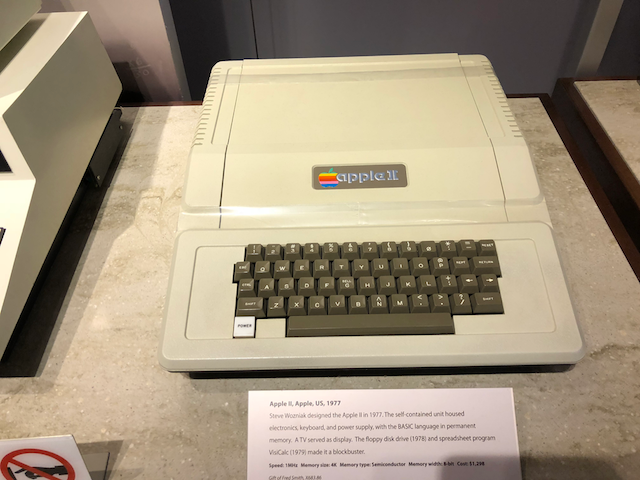 The Apple II was the first computer I ever programmed. Lets face it, if you couldn’t write a little basic, the Apple II was pretty useless. I first encountered the Apple II in the AV room of my high school in the spring of my Freshman year in 1979. I never looked back. Hacking the Lemonade Stand game was my first stab at modifying someone else’s code. 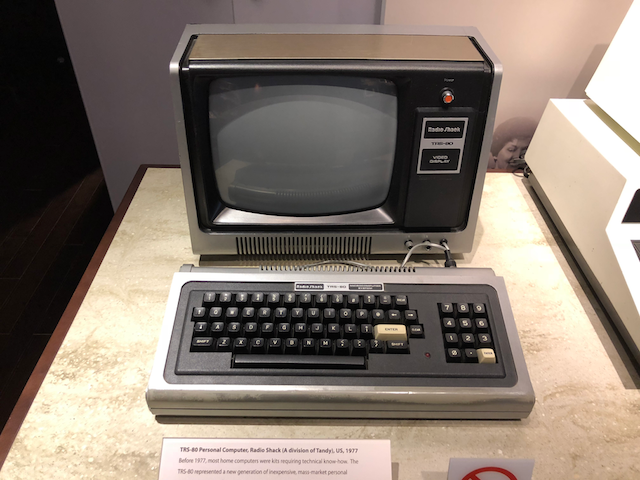 Of course this is the computer I wanted for my own. It was less expensive than the Apple, black and white and ran BASIC. 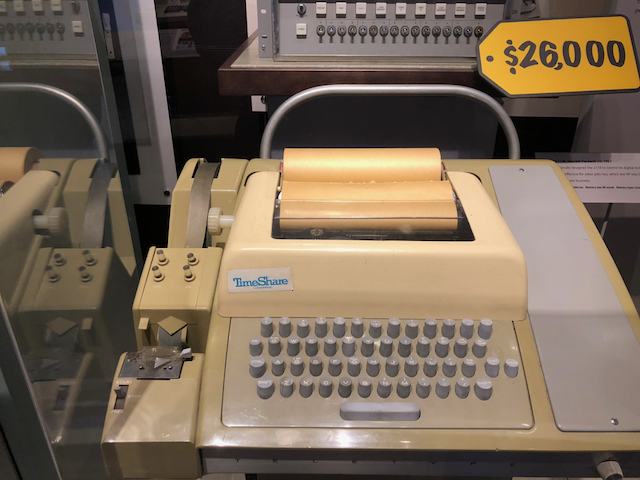 Luverne high school, like many schools ofthe day, was connected to MECC (Minnesota Educational Computing Consortium) By 300 baud modem we connected to a big CDC computer running somewhere in the twin cities. We could play Star Trek against other high school students or use a primitive chat program where, even in 1980, every third high school girl went by an online name of “FoxyLady” Of course back than it was FOXYLADY as lower case characters were not invented yet. This particular specimin actually only ran at 110 baud and was pretty much out of use by the tie I got into high school Using this seemed like a huge pain, but at least I can say that I missed the card punch era! Beyond basic on the AppleII we could write programs in Pascal on the MECC computers. 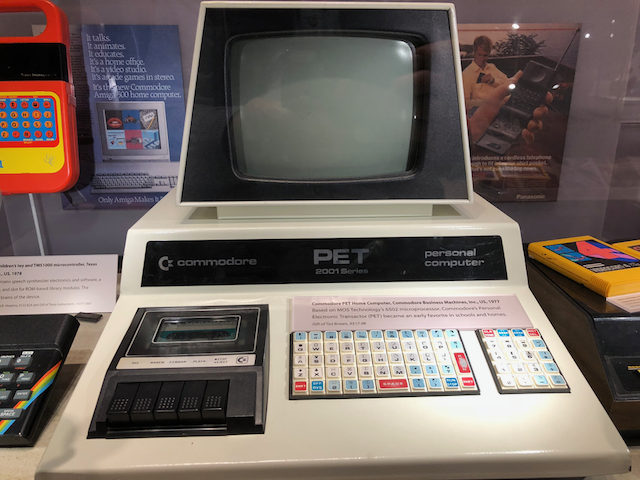 When I got to Luther College and went to my first General Physics lab, these were the computers that greeted us. Programmable in basic, and easy to interface to simple lab equipment using the basic commands PEEK and POKE to set and read memory locations that were mapped to the I/O devices. We could also use the PET computers to do accurate timing, as long as you were able to convert from the unit of a “Jiffy” to seconds. As I recall there were 60 Jiffies in a second. 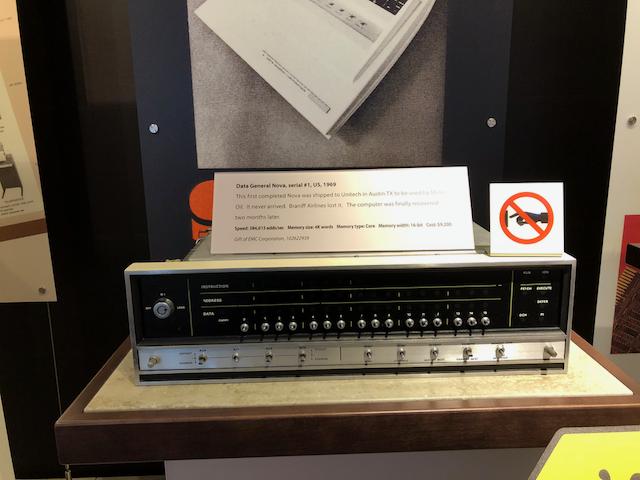 I never actually used a Data General computer, but during my first year of college I read Tracy Kidder’s book The Soul of a New Machine, this book had such a huge influence on me, it totally cemented my career path toward computer computer science. I loved this book so much that I kept it and had it in my office atLuther after I became a professor. When Kidder came to Luther to give the opening convocation speech a few years ago to talk about his latest book Mountains beyond Mountains, I was able to meet him and have him autograph my 30+ year old paperback. He actually looked quite surprised that I had a paperback that old. 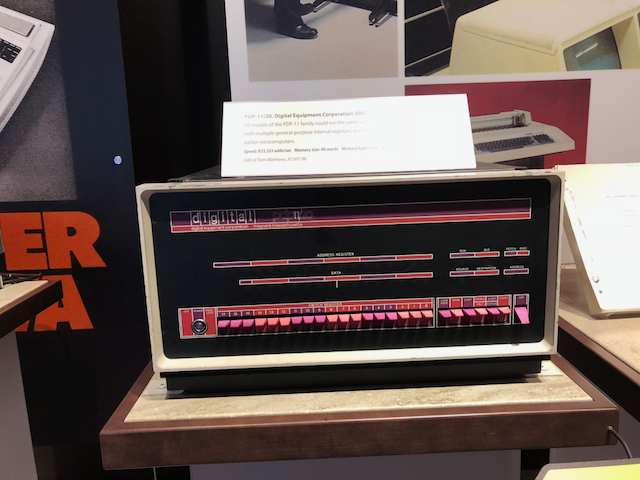 Another early computer I encountered at Luther, in the MRI lab, was an LSI-11, this was the Heathkit replica of this PDP-11. The lab had an even older PDP-8 but the museum didn’t have one of those. 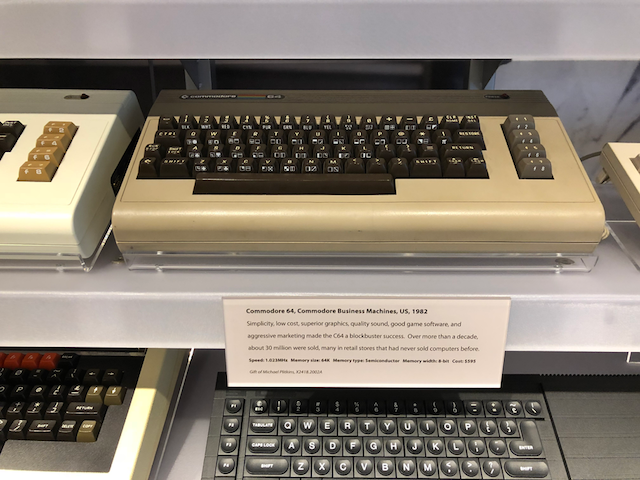 What I worked on the most in the MRI lab at Luther was a Commodore64. We had a cartridge version of the programming language FORTH that I used to write a program to collect data from the Analog to Digital Converter. I remember being shocked that we were using this incredibly inexpensive computerto control a \$10,000 data collection device. 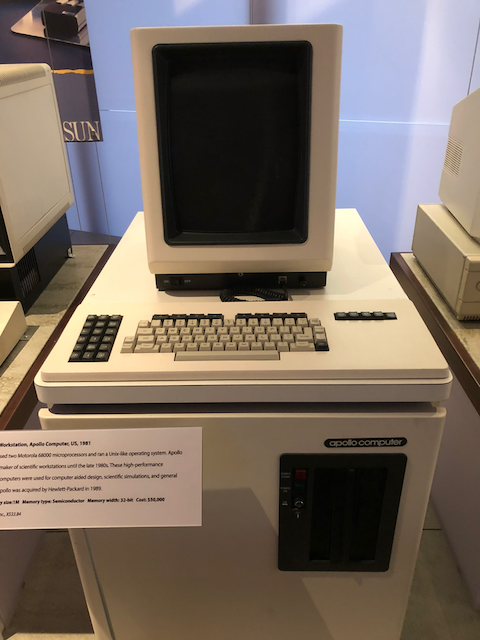 In the summer of 1985 I had the amazing opportunity to do an internship at Amoco research center in Tulsa Oklahoma. I was tasked with writing benchmarks to test various implementations of Lisp for the IBM PC. I remember that I had the first PC/AT in the building. But more interesting was my friend Jay’s Apollo. I think we called this mini-computers back then, today we would think of them as workstations. What I remember most about the Apollo was the speed of it, and the graphics capabilities! This was the very early days of windows and mice, and I recall that Jay had a program that he could start up on the Apollo that would make it look like chunks of your display were breaking loose and falling to the bottom of your screen. It was hilarious the first time it happened to us. That summer was also my first exposure to using a 3270 green screen terminal. Sadly I didn’t seen one at the computer history museum. 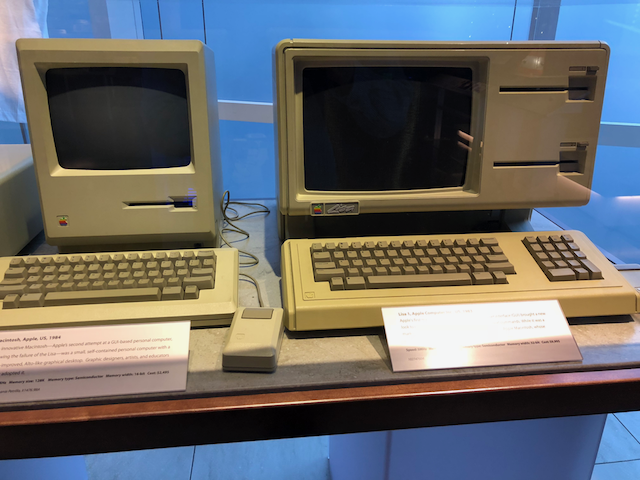 Jay also had a Lisa in his home office! I couldn’t wait to graduate and make some money so I could have one of my own. Of course by the time Jane and I got married just a year later the Lisa was a thing of the past and so we got a Mac Plus instead! I still have this computer in my office at Luther. It still boots from a floppy and runs Microsoft’s flight simulator. 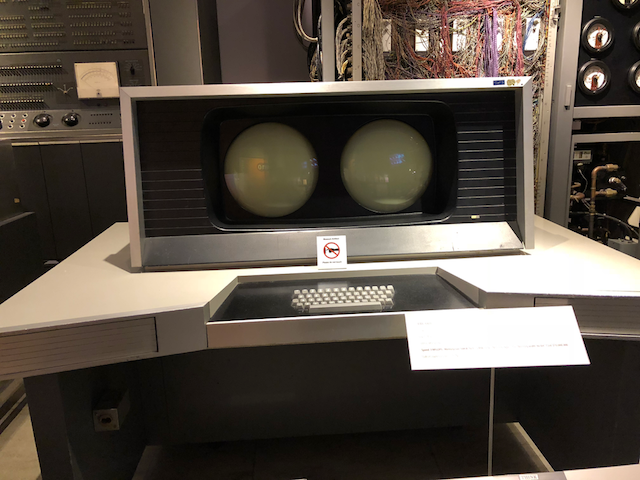 When I started work at Control Data’s Energy Management Systems division in 1986 I was awed by the giant cooled computer room. There were lots of giant water cooled Cyber computers in there for the newer customers, but amongst all of those newere Cybers was this little old CDC6600 computer than was running an older version of the software. If it scares you that our electrical grid was controlled by one of these don’t worry, they were solid work horses for many years. What I remember most about the 6600 was that there was a little program that made the two CRT’s look like eyes, and then one of them would wink at you. 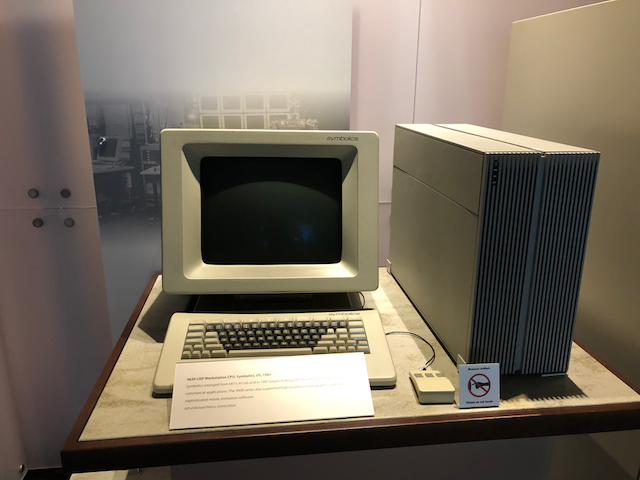 After a couple of years at CDC I managed to manuever my way into an AI group. A lot of high-end AI programming was done in Lisp in those days and the Symbolics was the machine to have if you really wanted to do it. 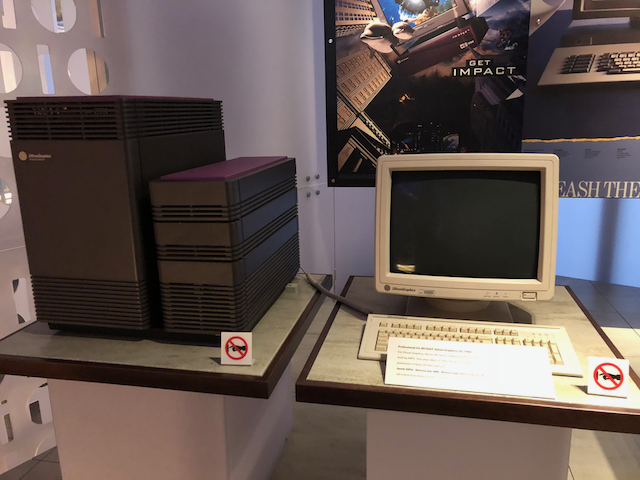 Shortly after the Symbolics we switched to running more general purpose Unix workstations. CDC was reselling SGI computers under the label of “Personal Iris” I taught myself some very early graphics in what eventually became OpenGL on these machines. This began a life long love of using Unix. I spent many extra hours on the Iris compiling emacs and other early open source programs. 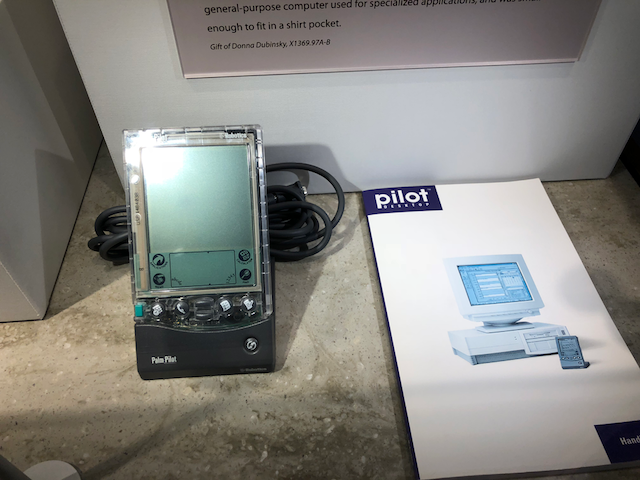 The last bit of nostalgia I captured at the museum was this first generation Palm Pilot! I remember that when Net Perceptions officially launched our product it was at the Agenda conference in Phoenix Arizona. They were also launching the Palm Pilot at that same conference. What I remember most about this was the brilliant marketing they did. First, they had preloaded a bunch of Palm Pilots with the conference schedule. Second, they had a bunch of “old ladies” demonstrating how easy they were to use. They showed you the Grafiti writing system, how to add meetings, and they took your credit card with the promise that you could use one for the duration of the conference and if you didn’t want it after that they wouldn’t charge your card. I’m pretty sure every single person kept theirs. This was the first of a very long line of PDAs that I have owned over the years. I could probably do a whole post just on those.

Visiting the Computer History Museum was educational, and a great trip down memory lane for me. If you are ever in Mountain View and have a few hours I would highly recommend you plan to spend couple hours exploring!

Jeff Bezos likes to talk about technology and civilization and where we are at in terms of the analogy that we are still at “Day One.” He recently observed that we are so early in Day One that the alarm clock hasn’t even gone off yet.

With new technologies, it’s very tempting to think that you’re further along than you are. But usually, you’re more primitive than you think. My guess is we’re still pretty primitive. We as a society, as a civilization. I doubt we have figured out the new technologies very well yet. At Amazon, we’re doing our part in trying to push things forward, but I have the feeling it’s Day One.

And so it was that we found ourselves in the building called Day One South, meeting with our very gracious host Sam. This was a great way to start, and although Sam had not been prompted in any way about what to say, he hit on some of key themes for the students to take away from the course: 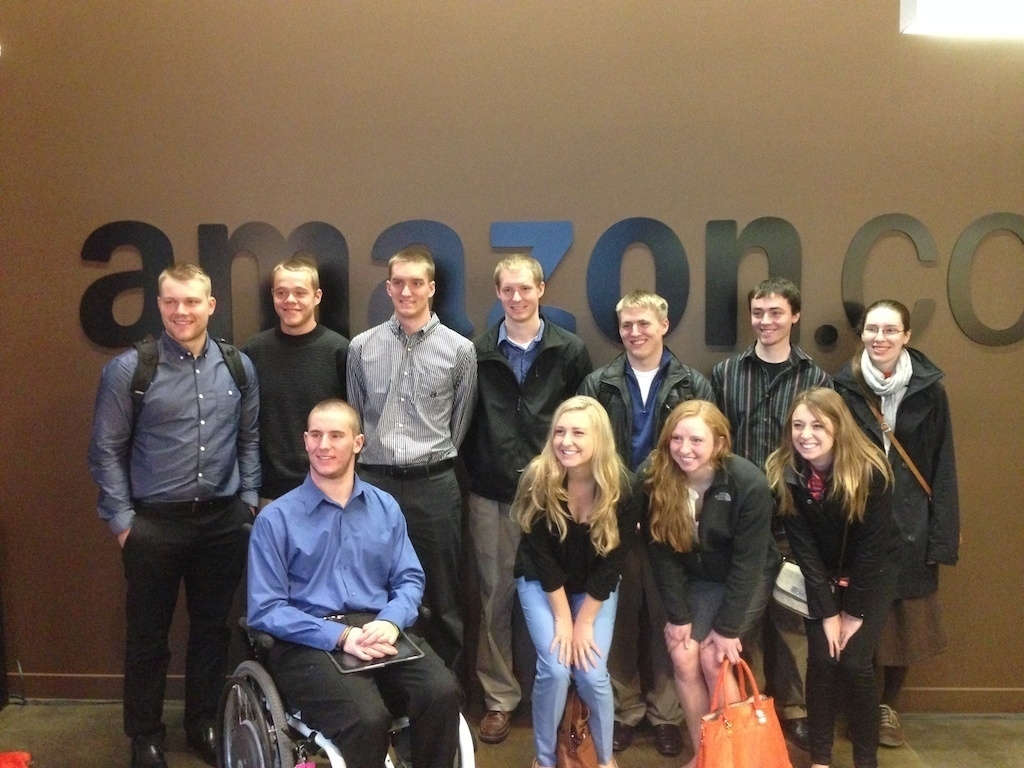 After our meeting with Amazon we found a coffee shop where we could take over a large table and had some group discussion. I told my own story of Net Perceptions, which I should probably write down here soon, and tried to relate my own experience with the themes I want the students to look for over the next three weeks.