“First world problems eh?” We all use that phrase to acknowledge that when we are complaining about our iPhone being a little too slow, or our dinner selections not quite vast enough, we really do get that its not that important in the grand scheme of things. Today, we experienced life in the slum of Mumbai known as Dharavi, and it put into perspective the distance between our first world problems and real life. I don’t think I’ll use that phrase anymore as it feels like it doesn’t come close to recognizing the challenges faced by those living outside the first world. 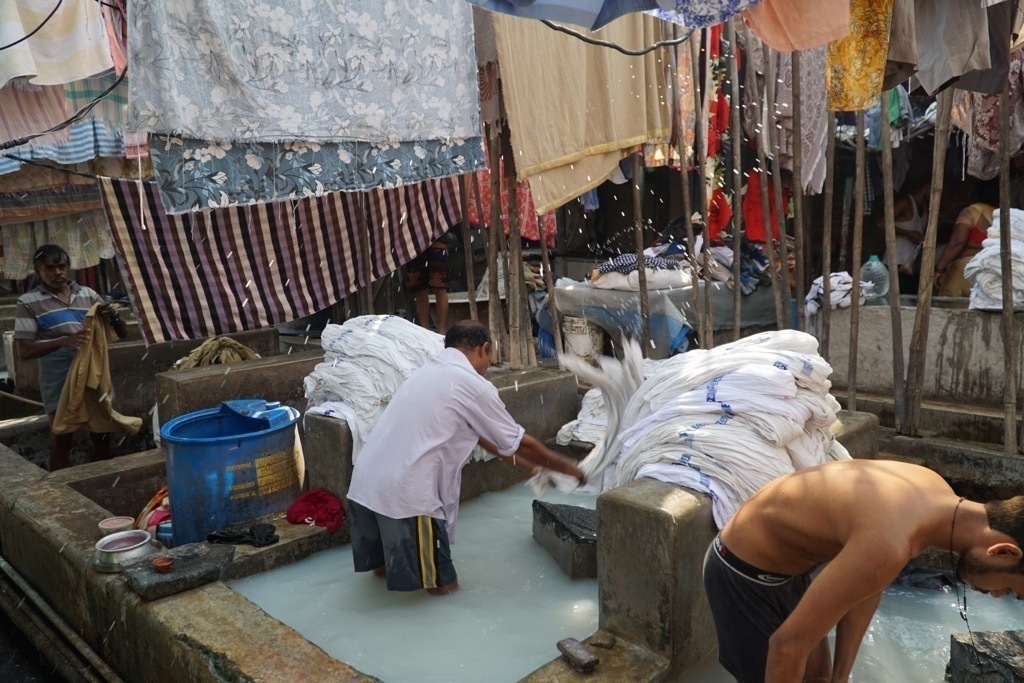 Jane arranged our tour of Mumbai through a tour group called reality tours. They were excellent and I would highly recommend you use them if you ever visit Mumbai. Not only are the guides excellent but 80% of the proceeds from your tour dollars go straight into their community. Their community happens to be in one corner of the Dharavi slum. I was absolutely floored to learn that our tour guide for the day lived in the slum! I thought that slums were only for the very most poor and destitute, surely not for someone who was educated, well spoken and hard working! In fact we learned that many professionals such as teachers and policemen live in the slums of Mumbai. This reality runs straight against our American ideals, but we were not in America. 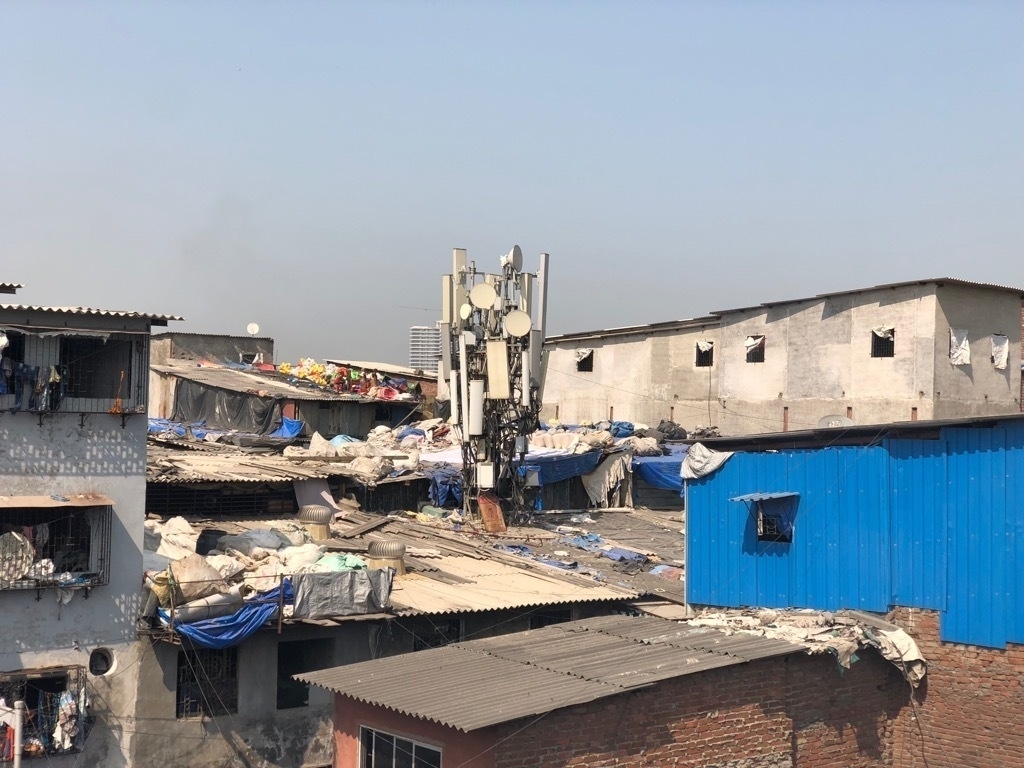 I’m pretty sure that we breathed som pretty toxic fumes on the first part of our tour today. The slum is divided into two parts, the commercial and the residential part. In the commercial part it seemed that recycling was a huge part of the economy, both lastic and aluminum. The plastic is broken down and then thrown into something that we Minnesotans would call a wood chipper, which breaks the plastic into smaller pieces. These pieces are then melted down and extruded into long strings and finally cut into tiny little lengths which makes little plastic pellets. These are then sold to manufacturers to be turned into who knows what. The dust and smell from the plastic can not be good for you. The same basic process is used for aluminum only that requires a lot higher temperatures. We saw a bunch of aluminum bricks that were so hot that people were cooking their lunch on them! In all of this we saw no hard hats, no safety goggles, and no shoes. We did see a lot of people working hard to earn money for their family.

In the residential area it was much different. The “streets” were so narrow that my shoulders stretched from one side to the other. The houses are quite small and for the most part families live together in a 10x20 foot room. Our guide was 30 and still lives with his parents and siblings because he cannot afford his own place. I learned that the average teacher’s salary is the equivalent of \$200 per month, so it is no wonder that housing is hard to afford. Later in the day our guide took us past the most expensive house in the world a 2+ billion dollar home built overlooking the sea owned by an indian billionaire.

He explained that the government tried to clean up the slums and built hi-rise apartments next door for people to move into, but they were so expensive that nobody could afford them and most ended up moving back. Living in the slums is not free, people there pay taxes and rent and bills for water and electricity. Water only runs for a few hours a day, although electricity is pretty constant. Each home is metered for electrical use! Although the wires are run so haphazardly I can’t imagine how it is very accurate. We were not allowed to take pictures as our guide explained we are in people’s homes and want to respect their privacy. Everywhere we went, we were greeted by the children. They were all smiles and wanted to say hello to us, give us a high five or shake hands. 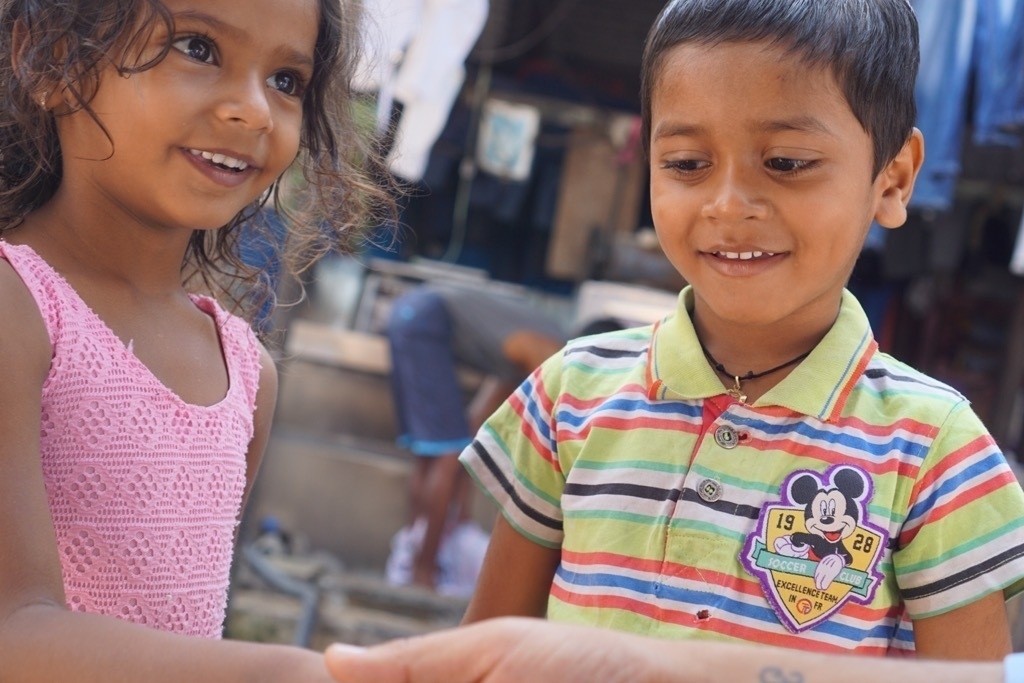 Another stop on our journey was the laundry. In a way this is similar to the slums in that people both live and work in the laundry. This is where the washing is done for hospitals and hotels and clothing manufacturers. We were able to take pictures inside here. Each of these large bins is one small business, doing the washing for someone.

Its all so strange and different, like a step back in time in some ways. Imagine that your hospital bedding was sterilized by throwing the sheets into a 50 gallon drum of water heated from below by an open flame!? Ironing? Of course they have ironing, have you ever seen an iron that is heated by coal? We saw some of them in use today.

So, although this part of the day was really sobering. We saw some fun and beautiful sites along the way too. The Victoria train station was very grand, and our stop at the cricket field was very entertaining. There must have been at least 100 different cricket games going on simultaneously. We watched as balls were hit across two, three, or even more other games. It seemed like total chaos to me, but it was clear that everyone was having a great time. 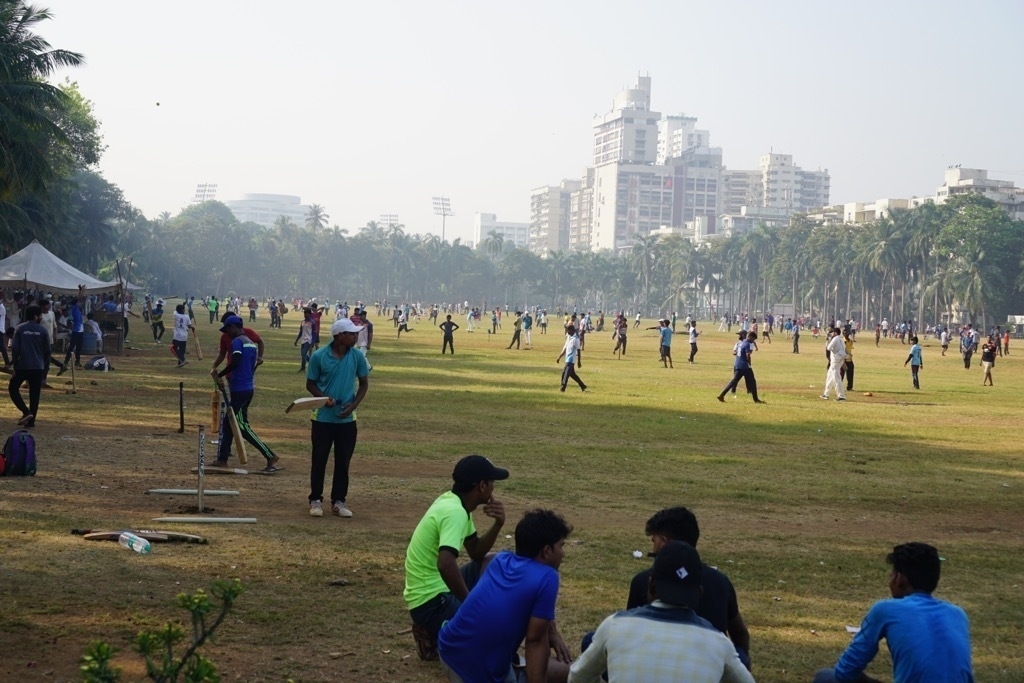 Our tour also featured a stop for some street food! We went to food stand at the beach owned by Bihm Singh, where we tried a number of different things. Pani Puri, Sev Puri and Dahi Ragda Puri. The Pani Pur and Dahi Ragda were both served in crisp little balls, where the cook punched a hole in the top and then filled the ball with delicious spicy ingredients. The Sev was more like a nacho in that it was a flat crispy bit of dough with the ingredients piled high. The way you eat these is to pop it all in your mouth at once. Jane got a fabulous photo of me demonstrating how to do this! 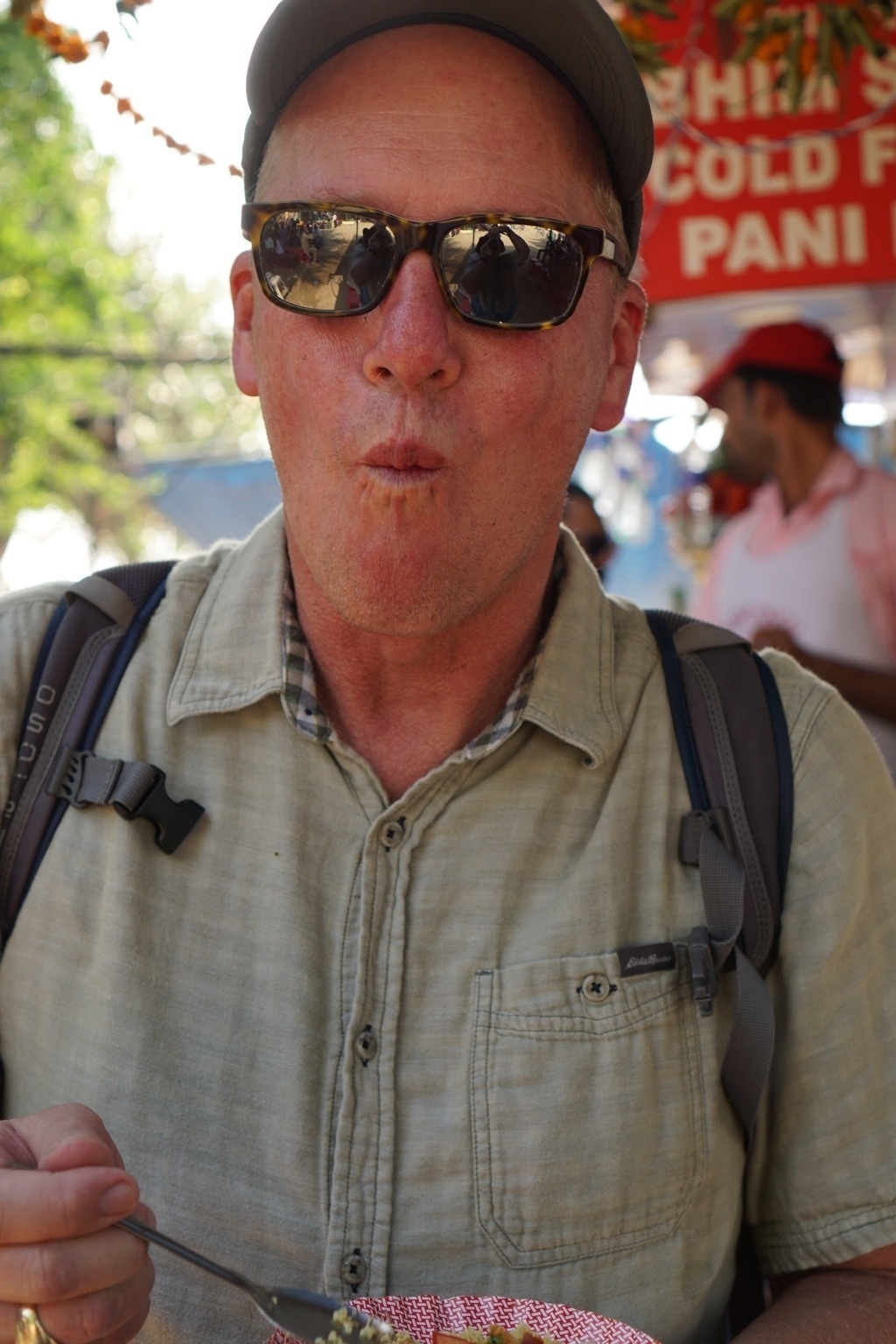 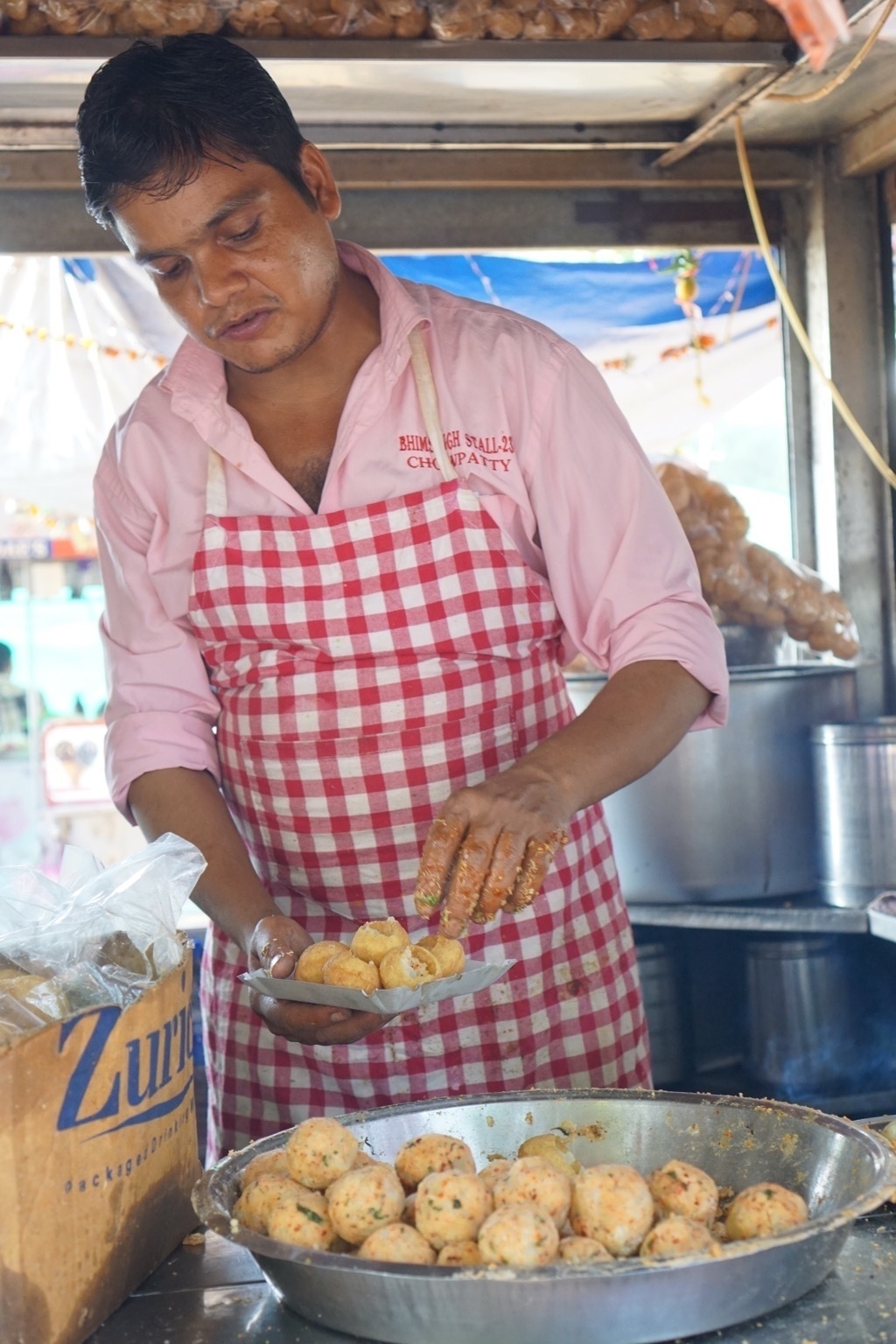 As far as I could tell the whole place was run on some kind of honor system. I never saw an order being written down, and yet people were eating all kinds of things chatting away and ordering and eating and chatting some more. like much of what we saw it seemed very cooperative and trusting amongst all of the participants. Such a different feel than you get in so many places back home.

I think the followup email from our guide sums up the day pretty well and since I’ve been struggling to put the day into words I’ll just quote him.

You have picked your way through Dharavi’s narrow, winding lanes, and witnessed first hand the communal, enterprising spirit that allows so many people to survive and thrive despite the many issues that they face. We hope you’ve left having had some of your perceptions about life here challenged.

To which I can only say, “mission accomplished.”