After a week in Morocco, Jane and I are now biking in the Andalusia region of Spain. Whereas Morocco was a bit of a mental and cultural challenge the biking is definitely a physical challenge! On day one we covered 24 miles and climbed 4,400 feet. On day two 27 miles and 6,600 feet. That is definitely a PR for me in terms of climbing.

I’m sitting in the hotel room this morning with mixed emotions. Its quite windy and cool outside this morning and I’m thinking of all of the climbing ahead of me, and my legs are a bit on the worn out side. On the other hand, we have seen some great scenery, this is really beautiful country. Jane made her decision yesterday, she is getting a massage, she is going shopping, she is pretty smart. 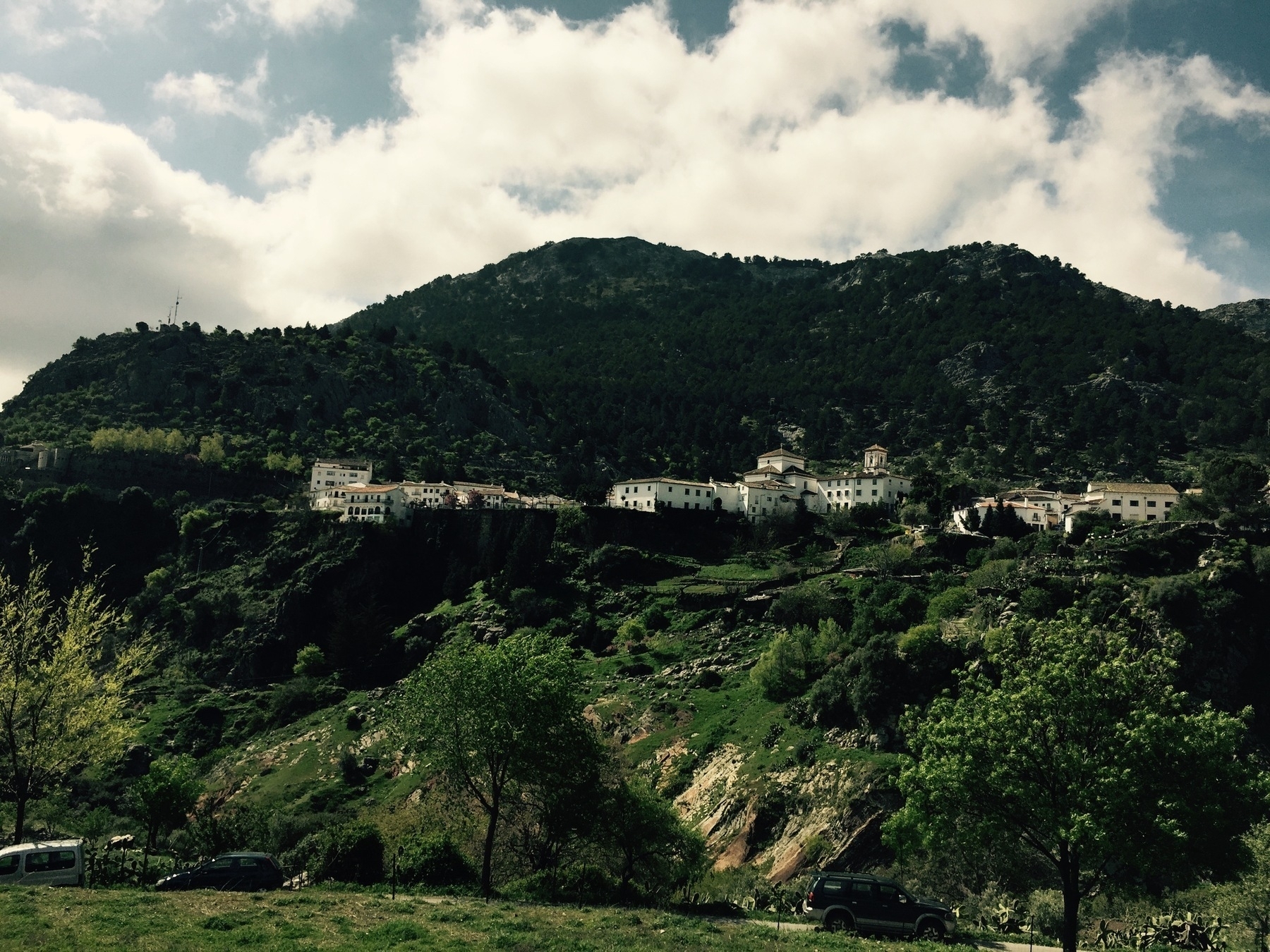 Fast forward to 5:00 I am back from biking, my legs are tired another 24 miles, not so much elevation today, only 3,500 feet. But I don’t mind, my legs are tired. Did I already mention that? Today I rode with Flynn, he is a young Australian, and an avid rock climber as well as cyclist. On our way out to Grazelema for lunch, we stopped at a hiking trail with a nice overlook of an ancient dam. The dam is very interesting as it was built in the early 19th century by workers working round the clock eight hour shifts. However after the dam was finished they discovered that they had used the wrong kind of stone, and it leaked badly. They were never able to repair the dam and make it usable for generating electricity, and so it was abandoned without ever being used. 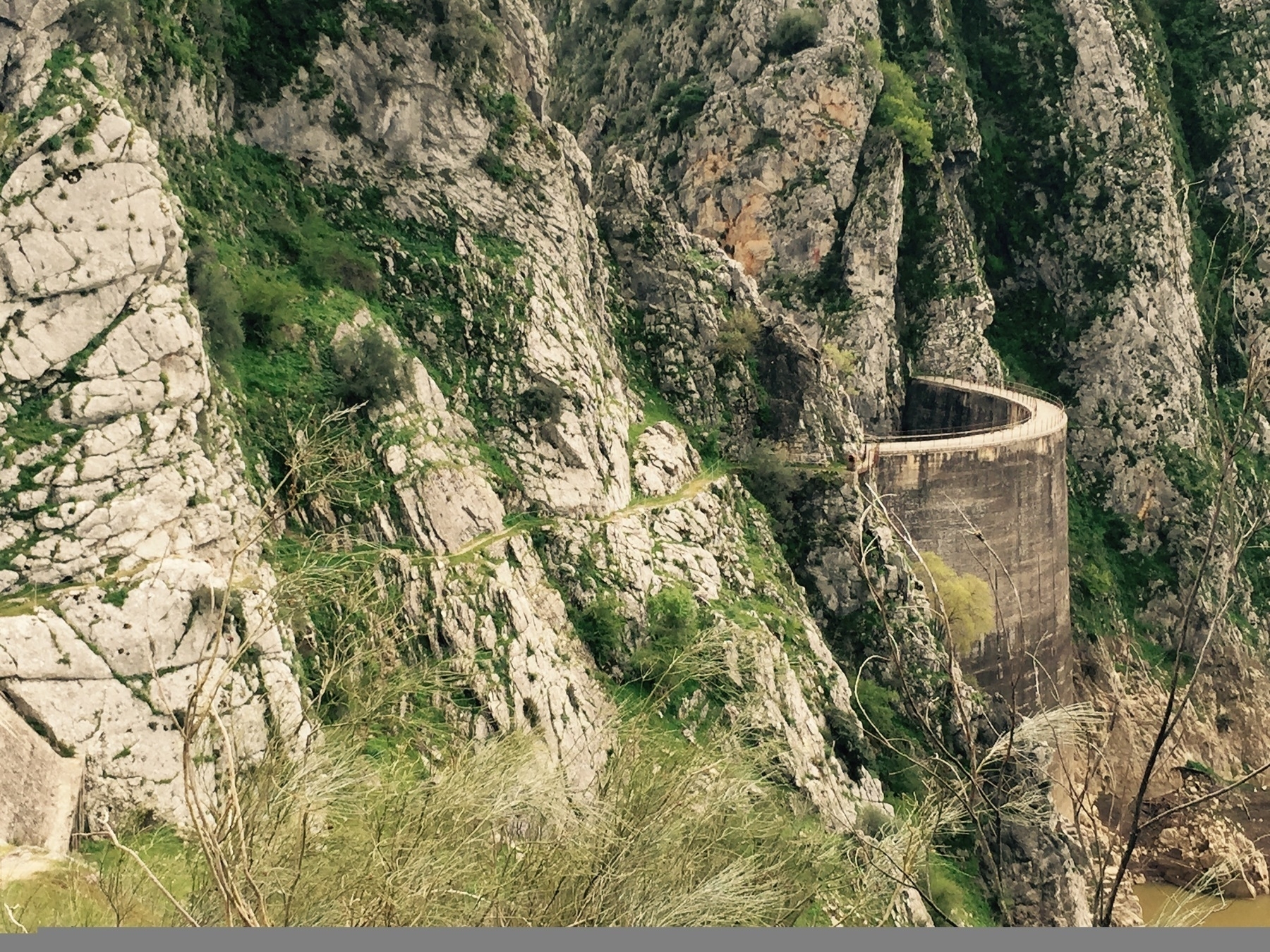 At lunch we decided that exploring around the dam would be a good diversion. Especially if we could walk out on top of it! So we rode the van back to the hiking area and started our way down. We were rewarded with some pretty spectacular views. As usual, its the unplanned side-trips that turn out to be the most interesting.

To summarize the trip to date, we have had some great food and stayed at some wonderful hotels. Our first night was in an old convent - convento magdalena – in the Andalusian countryside. nestled in between the mountain peaks it was very secluded and a great place to start our rest and relaxation. The picture below shows the clouds spilling over the mountain. They would come across the top and fall down into the valley, then they would rise up again and disappear before our eyes. 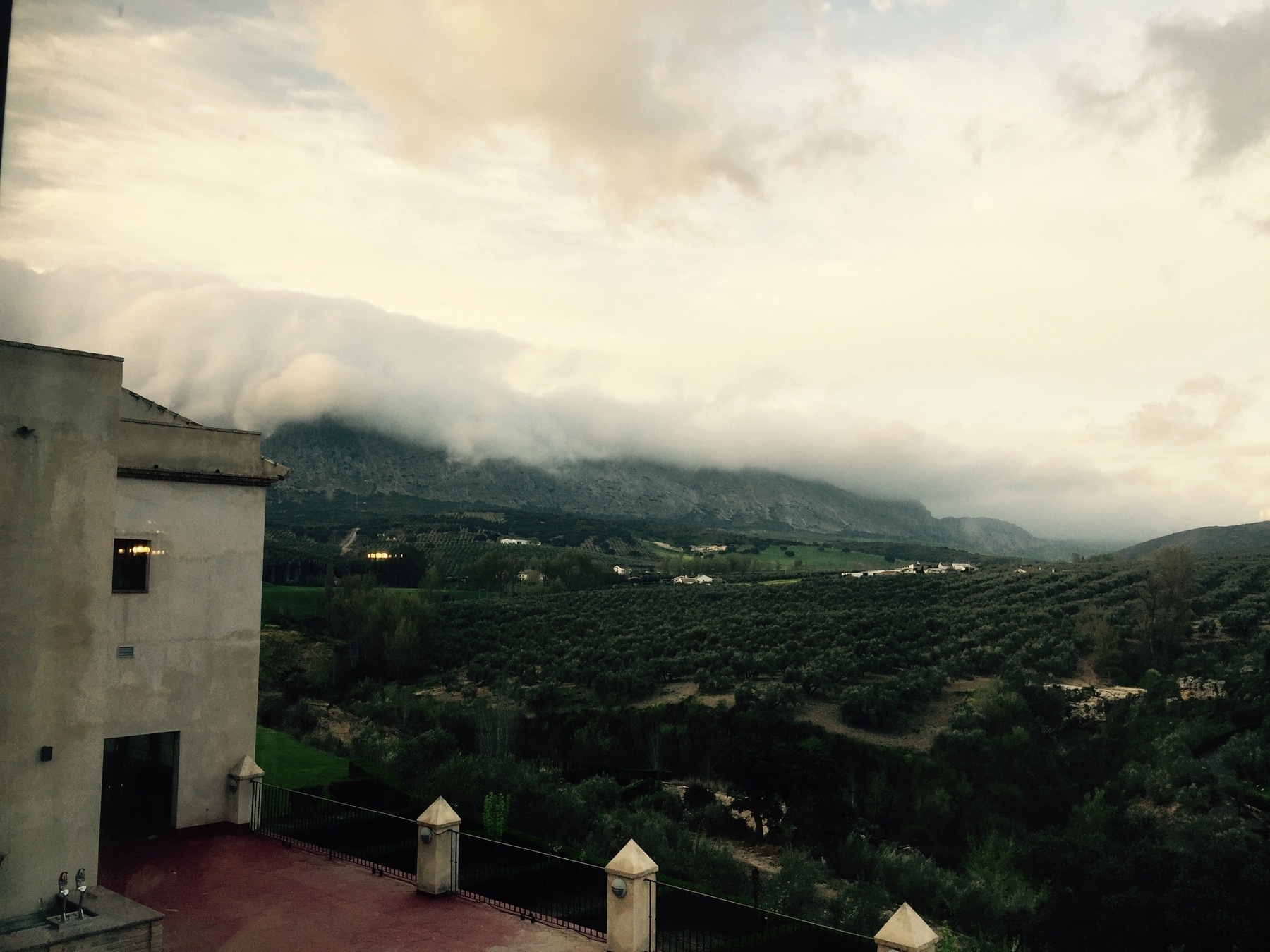 Day 2 brought us to the town of Ronda where we are spending two nights at the hotel Reina Victoria. It is obviously a popular biking stop as groups from Trek and Backroads are also staying here. The hotel has a nice spa, and we have a fabulous view out the window of our room. The view is because we are at the edge of town and right on the edge of a cliff. 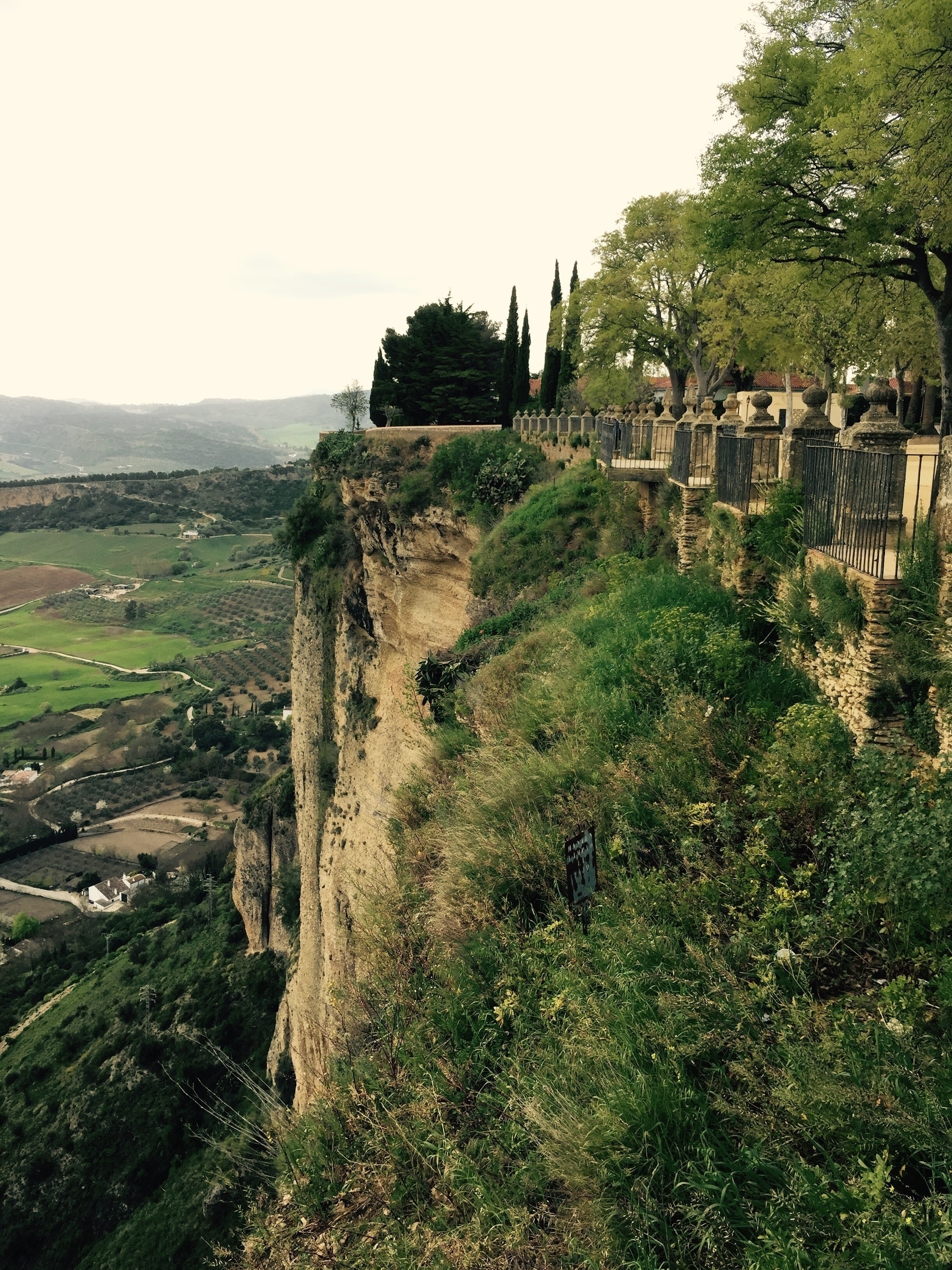 Ronda is a fascinating little town. A medieval village with Phoenician, Roman, and Arab walls. The whole town is on top of a highly defensible outcropping of rock. You would have to go steeply uphill, or straight up a cliff from almost any direction in order to attack the town. Ronda is divided into the old part which has the traditional “pueblos blancos” and the new part. The two halves are joined by the “new bridge” built in the seventeenth century. It is quite a marvel of engineering for that day! 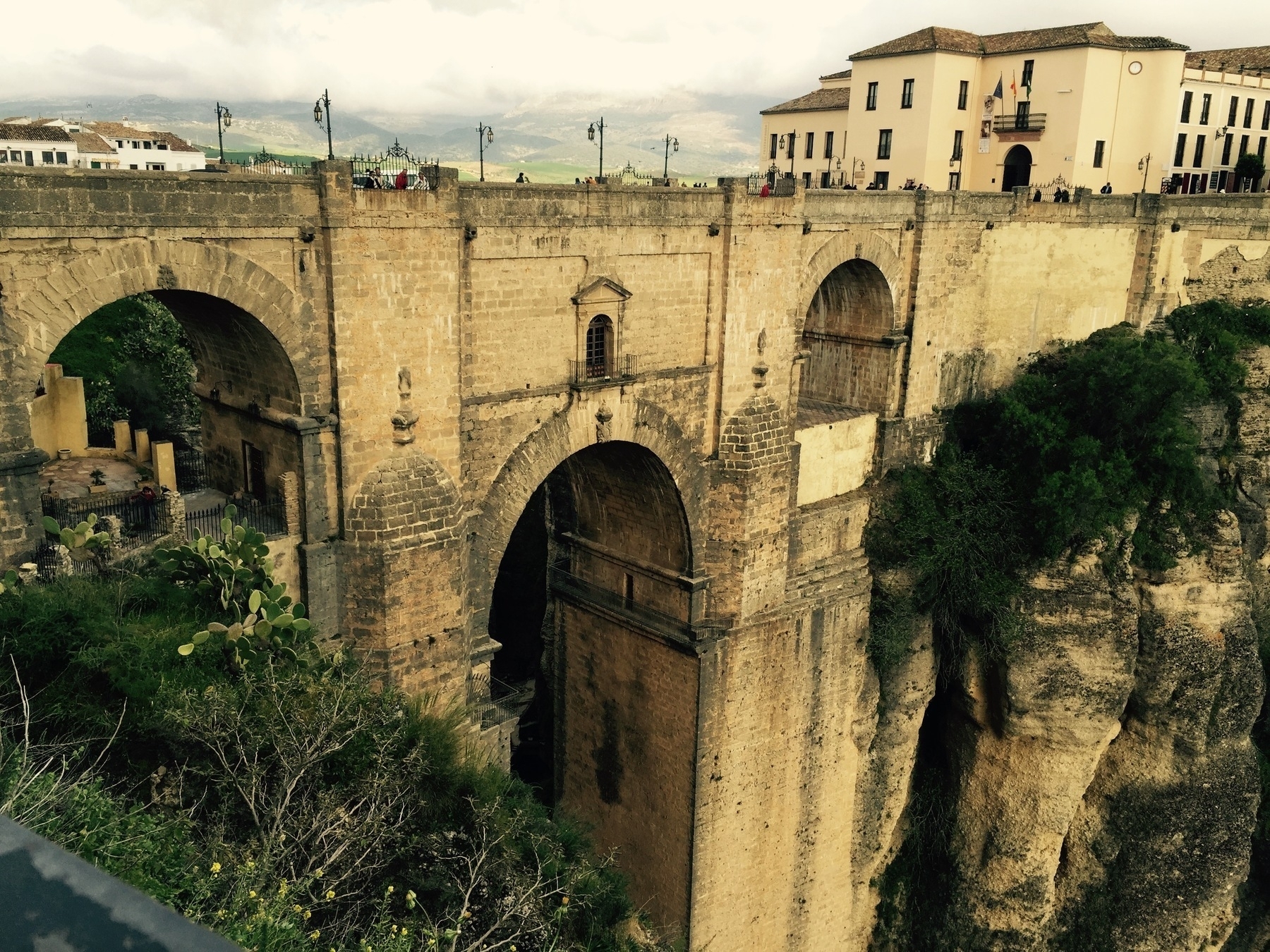