The road home runs through Devils Tower National Monument. A monument who got its name from a misunderstanding between the Native Americans name “Bear Lodge” and the white people.

Nothing about this tower says evil/devil. But apparently after the army slaughtered all of the bison the area was a stinking pile of carcasses and the army colonel described it as Devil’s Tower. There is a movement to change it back, predictably opposed by Wyoming members of congress. You can read more about it on the park service website

As is our usual practice we spent the last night on the road at a KOA so we could have a nice easy way to clean out our tanks for the long trip home. This KOA shows a movie every night — Close Encounters of the Third Kind. You may remember that this monument featured in that movie.

This is a popular spot for climbers. Except for the month of June when it is not open for climbing out of respect to the Here are some climbers coming back down. 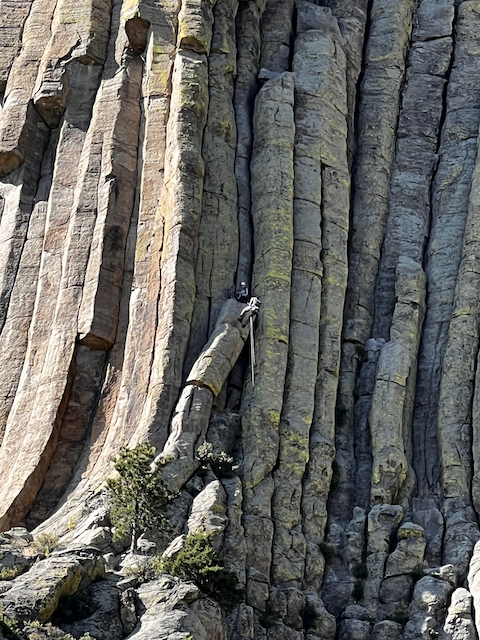 The title picture for this post was taken at 6 AM as we pulled out of the park to being our 13 hour journey back to Wisconsin. This was a fantastic trip, made even better by our traveling companions. Where will we be five years from now? Who knows, but it will be an adventure.