Mexican food so good that Donald Trump would build a wall around it!

I don’t even remember if the name of the restaurant was mentioned. But I would love to eat there to support the owners.

There is wisdom in wine.

There is bacteria in water

Love it, let’s have a glass of wine to celebrate the author of that sign.

I have to say that South Dakota is not a good value; it is pretty expensive scenery at almost $1.00 per mile! The reason that today was particularly expensive was the headwind. We were driving straight into a 20 mph wind gusting to 40 mph at times. Our gas mileage is normally 9-10 mph while pulling our camper, but today we were averaging 5.3. Yikes! I was beginning to think that today was our day for mechanical troubles until we stopped to fill up. I could hardly push the door open against the wind. Although relieved to understand why we were getting such poor mileage, Knutson’s van performed perfectly and with a diesel engine they were only using about a quarter of a tank to our 25 gallon fills.

We made it to the Badlands in the late morning and took the scenic drive through. The last time I was on this road, I was on my bike, so it was a different experience to see it from the truck.

The Badlands are so interesting with millions of years of geologic history on display. They have a map that shows what things looked like all those years ago and clearly this part of the world was under water. 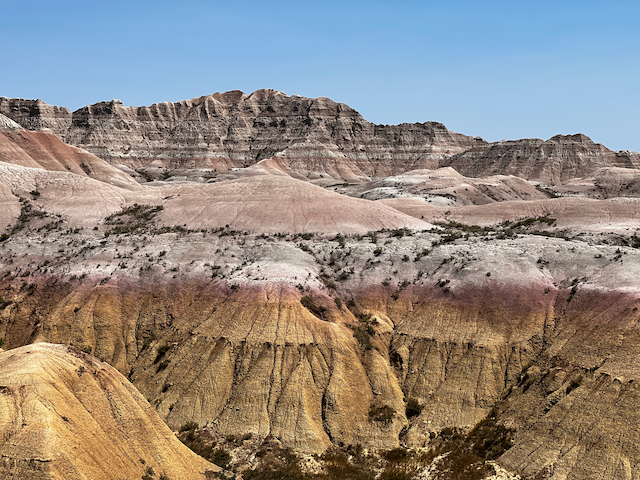 After we got through the Badlands our final 100 miles for the day brought us to Custer State Park. I think it must be one of the most beautiful state parks in the country. Our camp sight was beautiful, if a little small to back into. We set up camp at the Sylvan Lake campground and after a round of beers in the shade we headed out for the short hike around the lake. 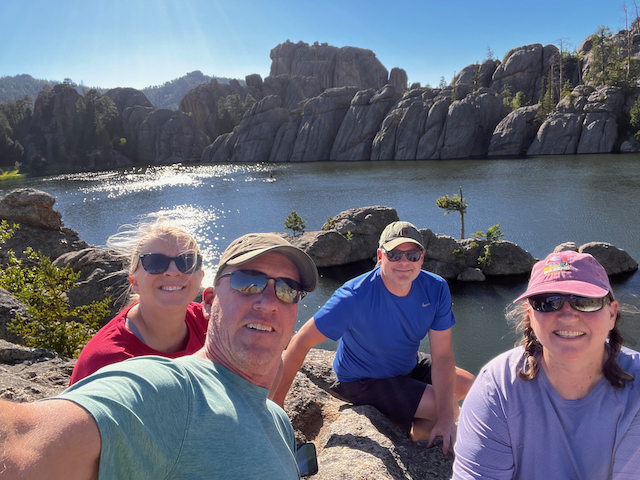 Dinner was wonderful, we had some delicious french dip foil sandwiches. Holly had made them with cheese and roast beef and then wrapped them in foil, we put them over the fire and they came out perfectly. Meanwhile we took on the task of trying to figure out the problem with the gas supply to the grill and griddle. By process of elimination we determined that it was the quick connect coupler on the camper that had to be clogged. The protective cover had either come off or we had forgotten to put it on, so it wasn’t too surprising that road grime was interfering with the flow. We took it off and washed it good with soapy water. That cleared it all up and so we are back in business to cook with gas. However we are having fun improvising our cooking over the open camp fire.

Unsurprisingly holly and Brian had not slept very well their first night in their van, so we called it a night relatively early.