Every five-ish years we have a special trip with our good friends Brian and Holly. We were all married on the same weekend in June, but one year apart. Brian was my college roommate and my best man. So to celebrate our five year anniversaries we do a trip together. We have been to Door County, Hawaii, the Mediterranean, the Caribbean, you get the idea. Every time we go it is an adventure.

This year is our 36th anniversary and their 35th. A few years ago we rented a 32 foot RV and visited Banff and Glacier. This year, we decided to keep the national park theme going and are heading to the Grand Tetons and Yellowstone. Since we have a travel trailer, Brian and Holly decided to rent a camper van and we would drive and camp together.

We were about an hour down the road when we got the following text from Holly. 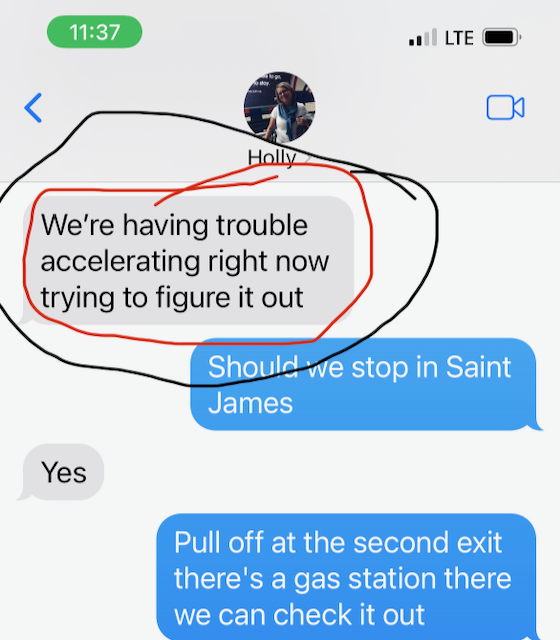 So we pulled off in Saint James and parked behind the Caseys. After turning off the van and restarting the engine everything seemed fine. So we continued on down the road. We got all the way to Heron Lake when it happened again. So we pulled into the Conoco station and they called their rental company. Once again restarting the van fixed the problem. After the third time we decided to pull over in Worthington and get some help from the rental company. The first thing we learned was that the roadside assistance provided with the rental was completely useless. They said they found one place that could help us, in the little town of Lismore, that could get us in on Wednesday! Discussions ensued with the owner of the RV who seemed pretty knowledgeable and correctly diagnosed what the problem was. Meanwhile the rental company got busy trying to locate an alternative RV to bring to us. The RV was in “limp mode”. When the RPMs exceed 2700 the turbo is not able to keep up and goes into a mode where you cannot accelerate.

At the owners suggestion we continued toward Sioux Falls, with a stop for gas in Luverne where gas was just $4.09. While we were in town we made a quick stop at Papik motors where we were able to get the error code read, which confirmed the diagnosis. A little further down the road we got word that we should head to Chris’s Auto Repair in Sioux Falls. If you ever need some work done on your car in Sioux Falls I would highly recommend, they are the nicest group you will find. They did some more diagnostic work to figure out exactly what needed to be replaced. Unfortunately they couldn’t get the part until Wednesday, so the owner dispatched his mechanic to make the four hour drive to Sioux Falls with the part. We now knew that we were not going camp in the badlands, so we found a couple of sites at the very nice Lake Vermillion recreation area. 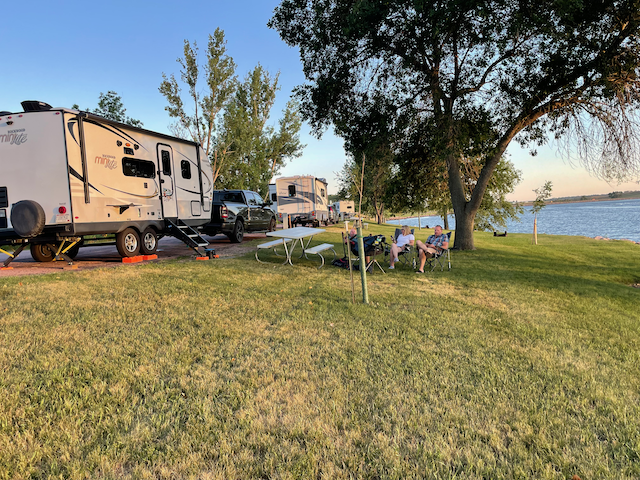 While waiting for the mechanic, we had happy hour and made some burgers. We were planning on grilling, but for some reason could not get the grill to light! Another mystery to figure out when we get settled in Custer. The induction burner and frying pan worked out just fine, so we had our burgers and enjoyed the views of the lake. 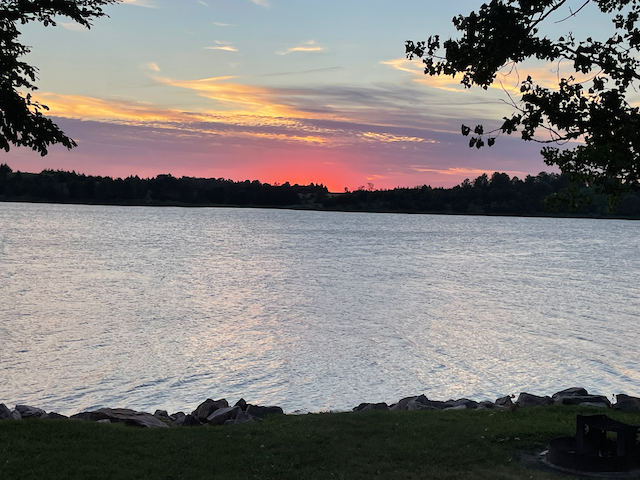 At around 9:00 the mechanic arrived, well it was actually not the mechanic but someone’s teenage son. Whatever! He got the job done and the RV has been running like a champ all day today. 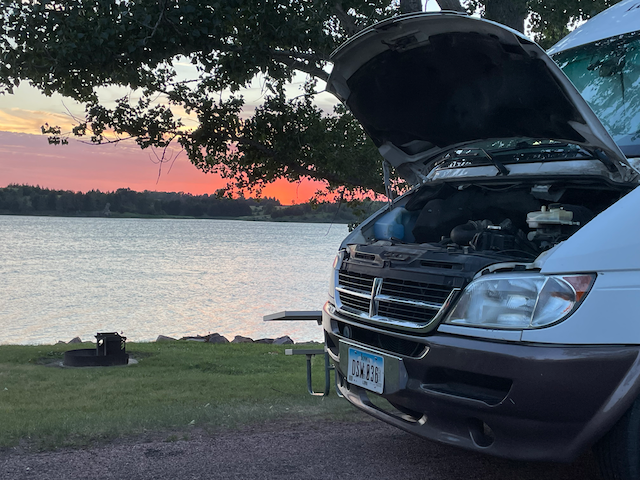