Today was a total washout. I woke up and looked at the forecast and radar only to see a huge patch of rain heading our way. Strangely from east to west. I guess we are in the south now? I just had time to get the bike on the rack and get them covered up before the rain started. So we had a nice breakfast and watched the radar. Clearly an all day thing. I am not into riding all day in the rain so today became a day off. When the rain finally did let up, we did a short hike at Wildcat Den State Park and then drove to Nauvoo.

Here is what it looks like when you are the only camper in the campground! 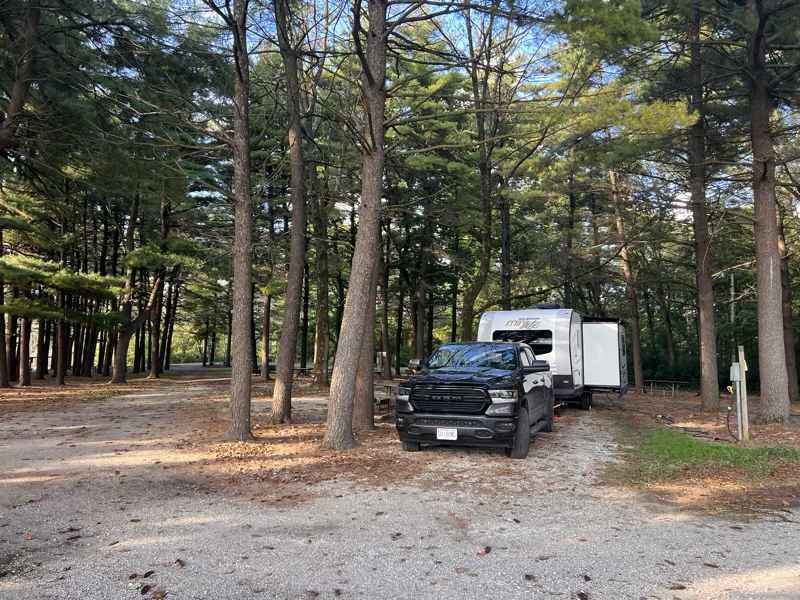 Nauvoo, home to the grave of Joseph Smith and one really big Mormon temple looked like a pretty sleepy little town as we pulled in. The town turned out to be larger than we thought, but it was still pretty quiet. After setting up camp we took a short walk to the oldest winery in Illinois. We keep trying to convince ourselves that we will find a good wine somewhere along the Mississippi. 🤣

The morning came and the sun was out, a great day to ride to ride. the first part of the day was beautiful, following the river right at river level.

As the day wore on I got further away from the river and more into farmland as well as higher temperatures and a bit of a southern breeze. A different kind of scenery but it was fun to see the harvest in progress.

Heading into Hannibal I rode across the Mississippi on I72 - the only stretch of Interstate in Illinois where bikes are allowed. At this point I was getting pretty tired of riding into the wind and I was low on water, so thankfully I was getting close. After the bridge it was all downhill into Hannibal. Unfortunately our campground was not in downtown, it was outside of Hannibal on the other side of a hill!

One shower and a gallon of water later I was ready to head back into town. We decided, unsurprisingly, on a pizza/pasta place called the brick oven. We were lucky I was ready for an early supper as by the time we left there was a very long waiting list.

Of course when in town you have to stop and help Tom Sawyer whitewash a fence.

On the way back to camp we stopped at Lovers Leap where we had a beautiful view of the river and Hannibal.

I did manage to stay awake until 10, even knowing that I had another 80 miles on the schedule for the next day.