The activity of the morning was a “long” walk around Dragon hill on Santa Cruz. The main objective was to see the Land Iguanas. These creatures have been restored to the island after they were endangered by feral dogs and goats that humans brought to the island. Santa Cruz is one of the few islands that is actually inhabited.

The cover picture for this post is actually of a marine iguana that was near the shore by a brackish pool. 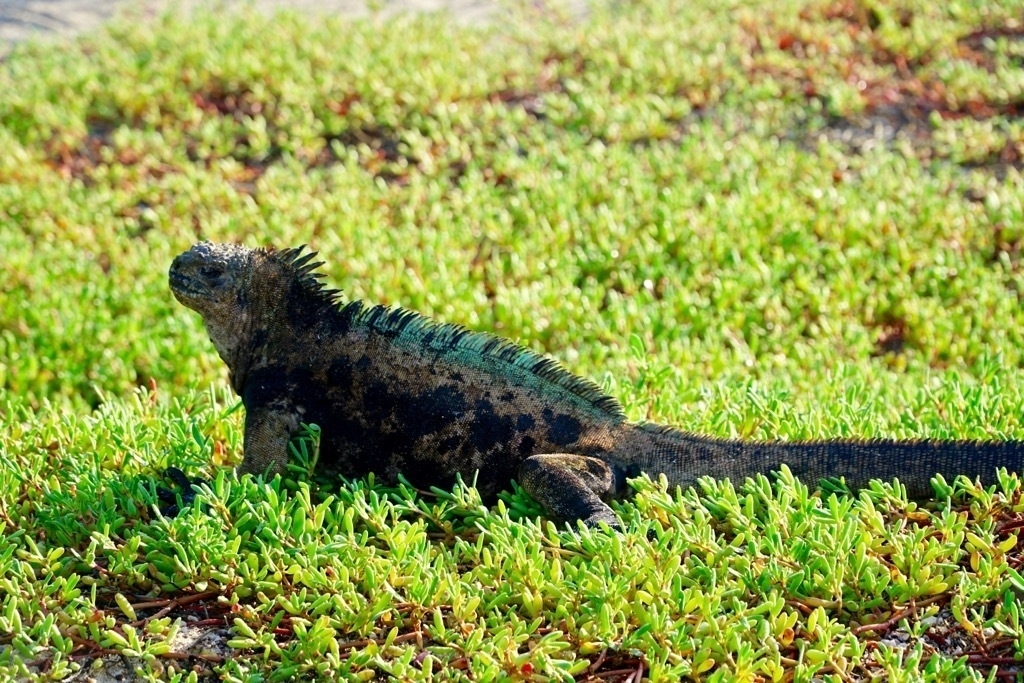 You can see a very clear difference in coloration and shape between the marine variety — which can swim using their tails for propulsion — and the land iguanas pictured below.

At one point they moved many of the Land Iguanas to an alternative island without any human habitation for them to come back, while they started a program to eradicate all of the goats and feral dogs. We actually saw a goat along the way, and the guides, who are also park rangers when they are on land, had to call it in so that the goat could be tracked down and captured. 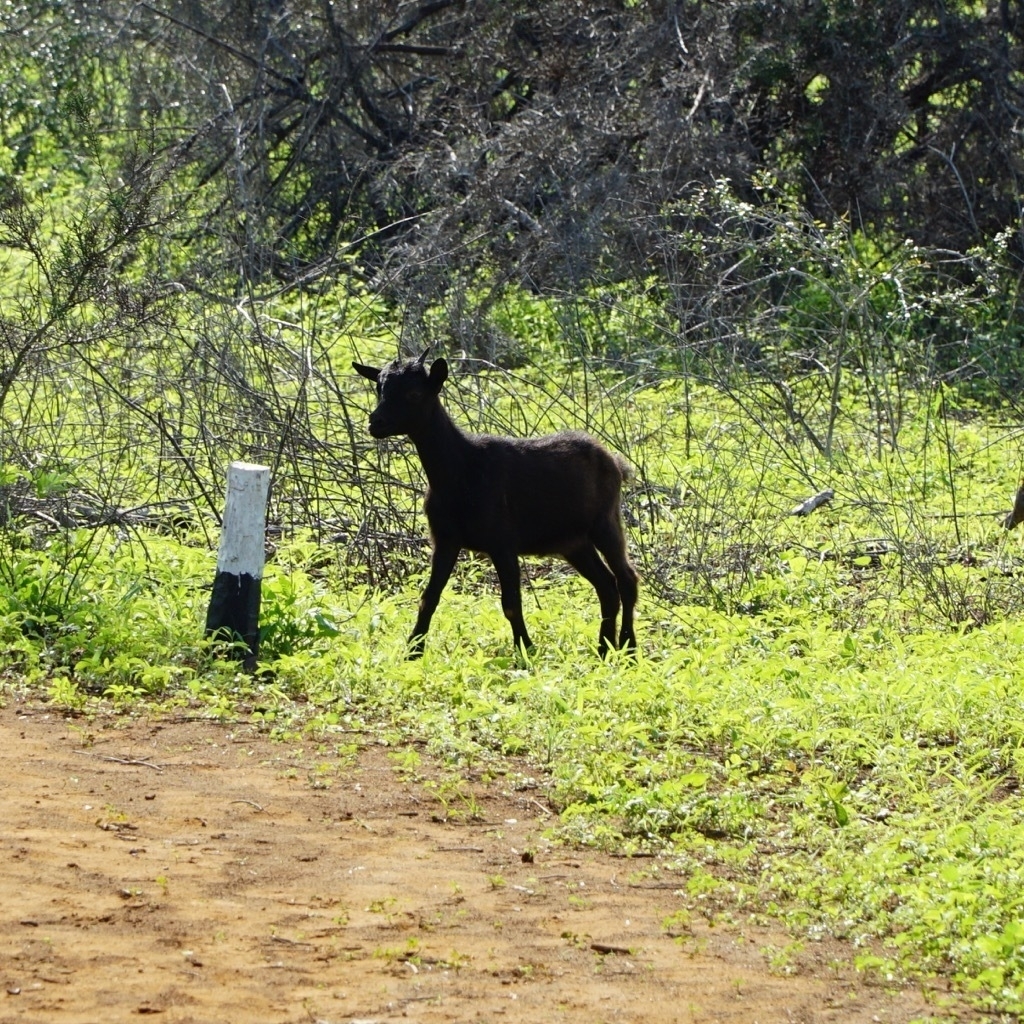 the walk started at 8:00 and already it was really hot. We began the walk on the beach and quickly passed by this beautiful brackish water pool. 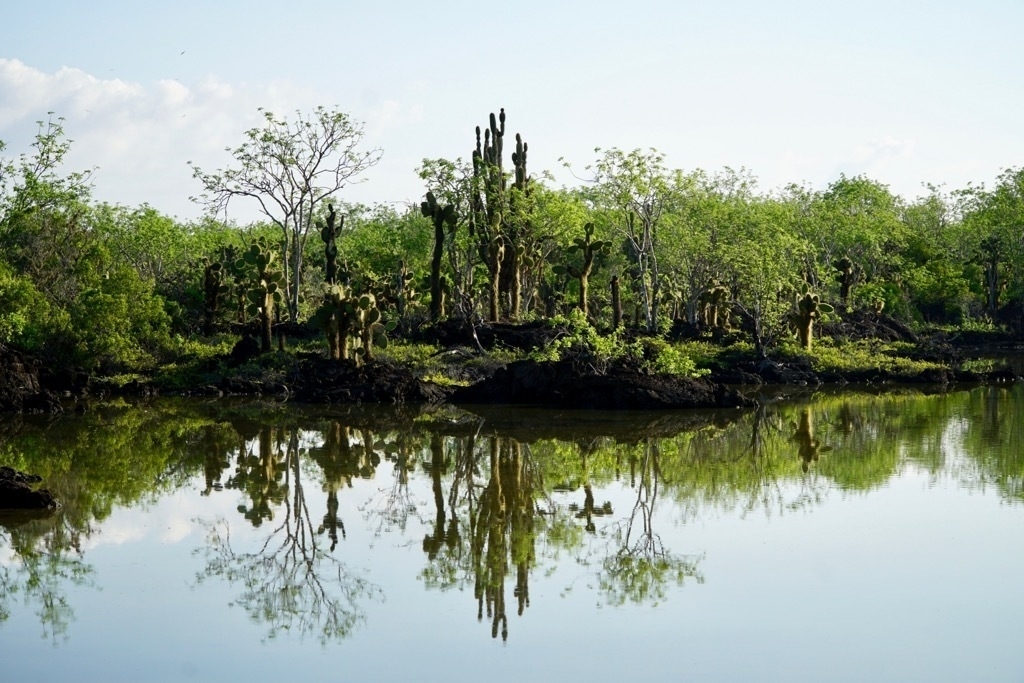 The path was very muddy from rain the previous night, and a few people from the group ahead of us called it quits and headed back to the beach. But we kept going, eyes peeled for our first siteing. The first Land Iguana we met was pretty hard to miss as he was right on the trail! 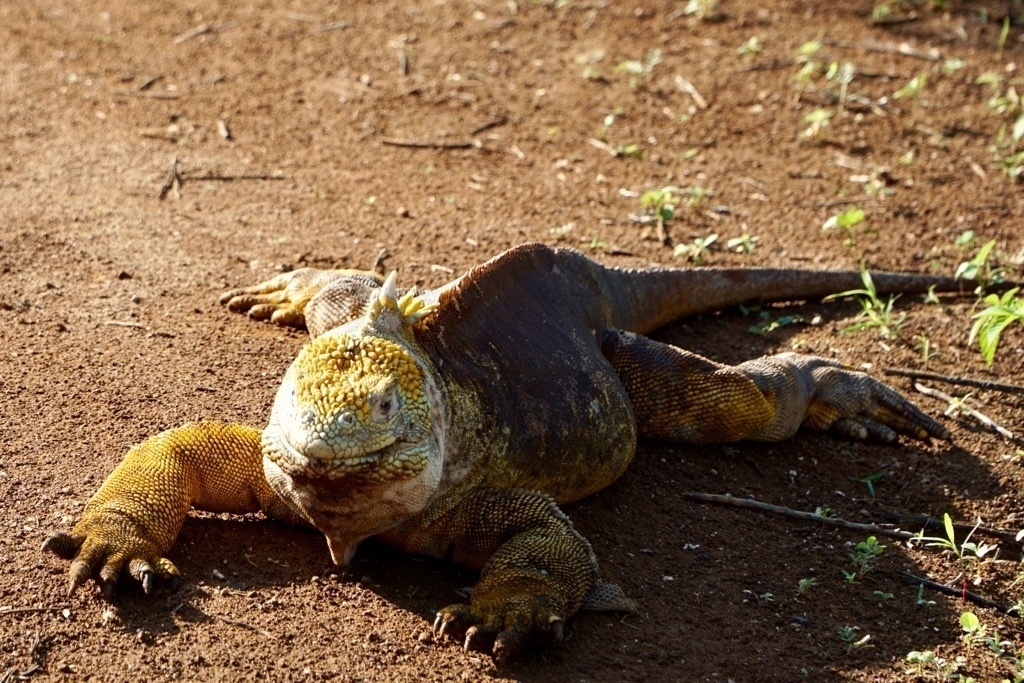 Once we spotted the first one we started to see quite a few of them. Some close to the path, some sitting right outside their burrows, some “lounge lizards” hanging out on a log. 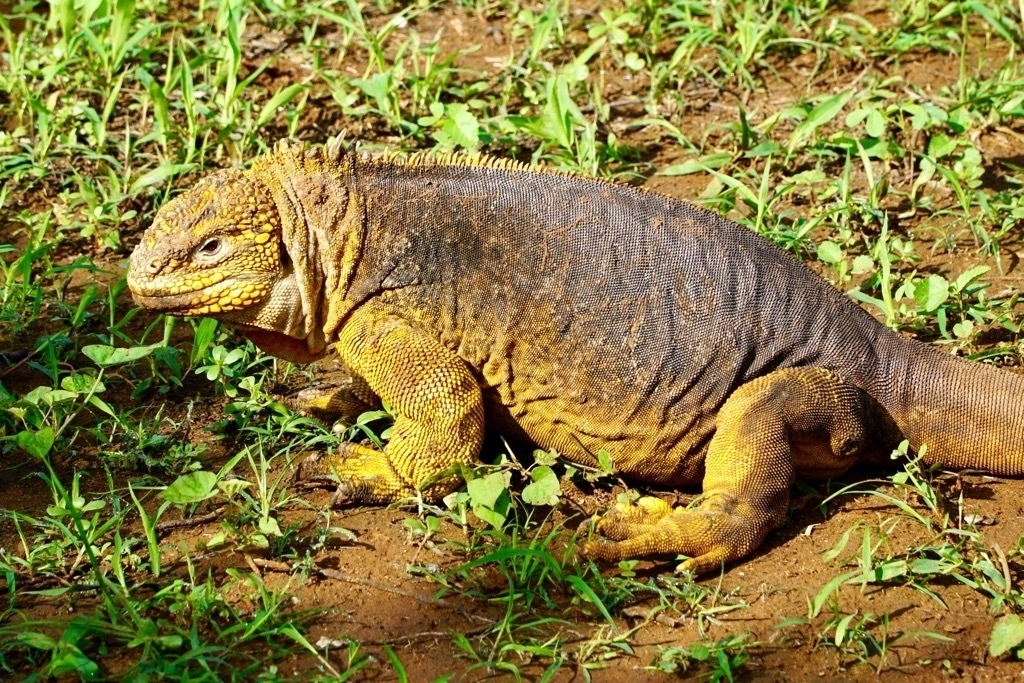 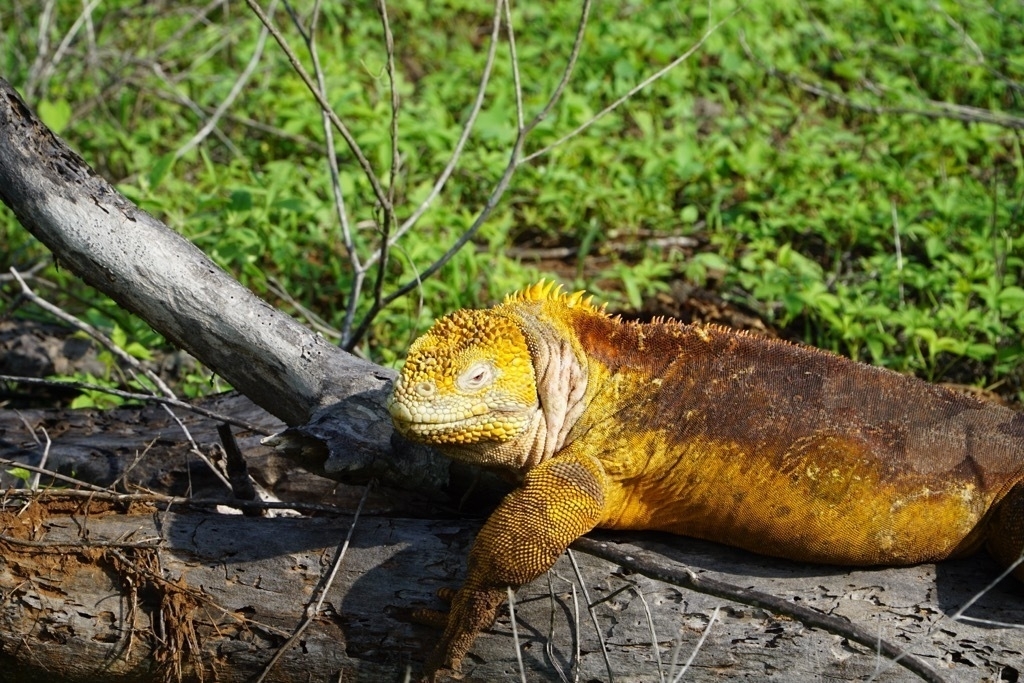 The scenery on the island was also very beautiful and couldn’t have been more different than our hike up the volcano from the day before. 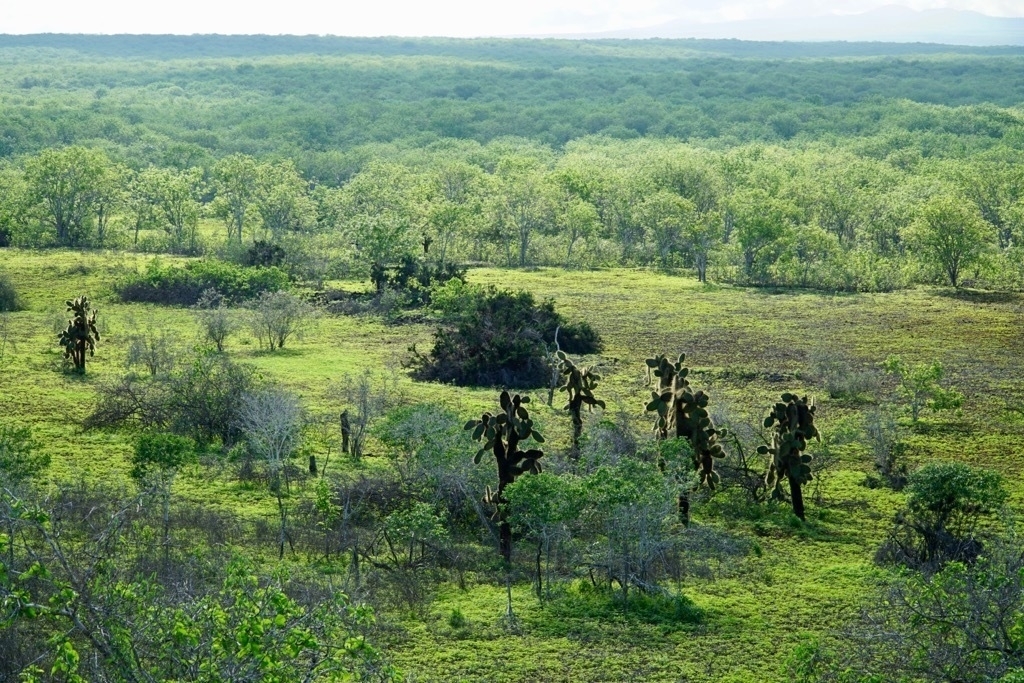 In the afternoon we had a beach snorkeling stop. The water was pretty wavy and as a result the visibility was not very good. I was right next to a big sea turtle and I could easily have grabbed onto the shell to go for a ride. But you don’t touch the wild animals so I just followed it and admired it s grace.

The real highlight of the snorkeling trip was the Pelicans. After coming back to shore there were about 3 brown pelicans that decided it was feeding time. They are “shallow plungers” so they swoop up into the air about 15 to 20 feet and then plunge awkwardly into the water to capture a fish! They were definitely not deterred by all of the humans in the water as several swooped right next to people! The pelicans were fine, but the people were a bit shocked! 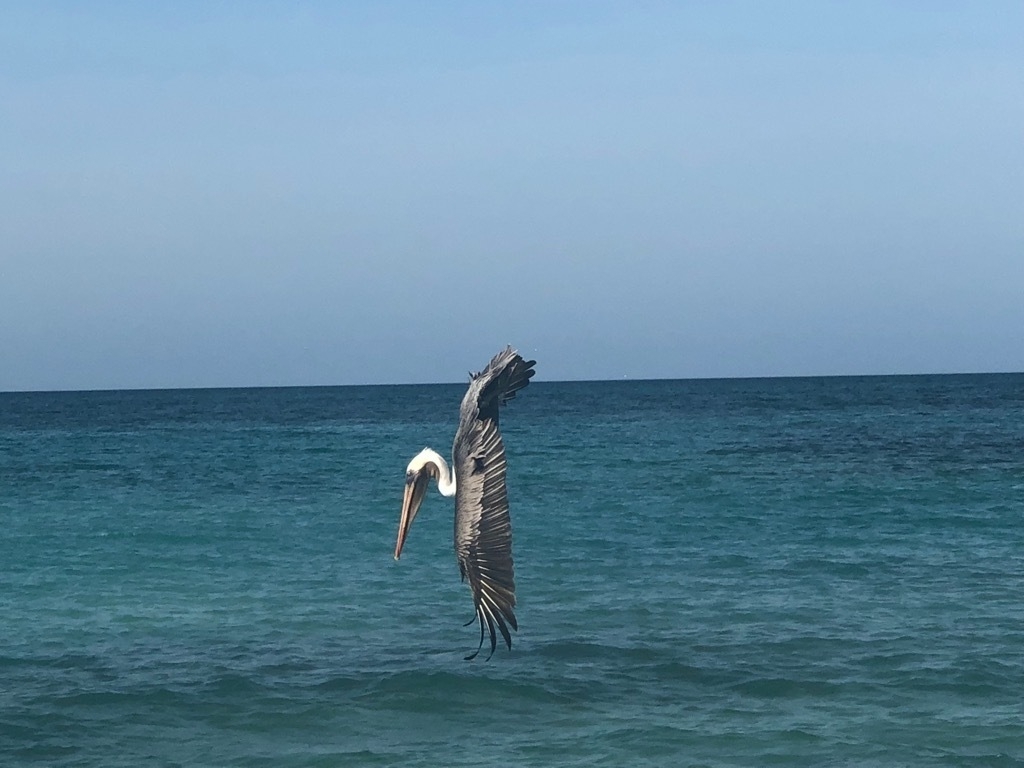