Looking out the window in the morning we couldn’t see anything. Had our luck changed? Were we going to have a rainy day after all? I went up on deck to investigate and was happy to see that it was just a dense fog. Caused by the cold water currents running up against the Galapagos ridge. It would burn off. All credit to Ann who insisted that we take the 10:00 excursion rather than the 8:00 excursion. This is what the fog looked like just before we boarded our zodiac at 10.

We later learned that it was so foggy during the 8:00 trip that one of the zodiacs took a wrong turn in all of the mangrove and got lost for a bit. Apparently everyone was taking it in stride and singing the theme song to Gillian’s island (except for one passenger who was not amused). I almost wish I was on that boat so I could tell the story in more detail. Here you can just barely make out our ship in the fog from a distance.

We were headed into a huge lagoon protected by mangroves but on the way we got some good sitings of a few of the marine birds. Below is the famous Blue Footed Boobie. Yes, I kind of giggle inside like a seventh grader every time I say that. The reality is that the name comes from the fact that they act like clowns during their mating dance. Kicking their legs up and flapping their wings and acting like fools. 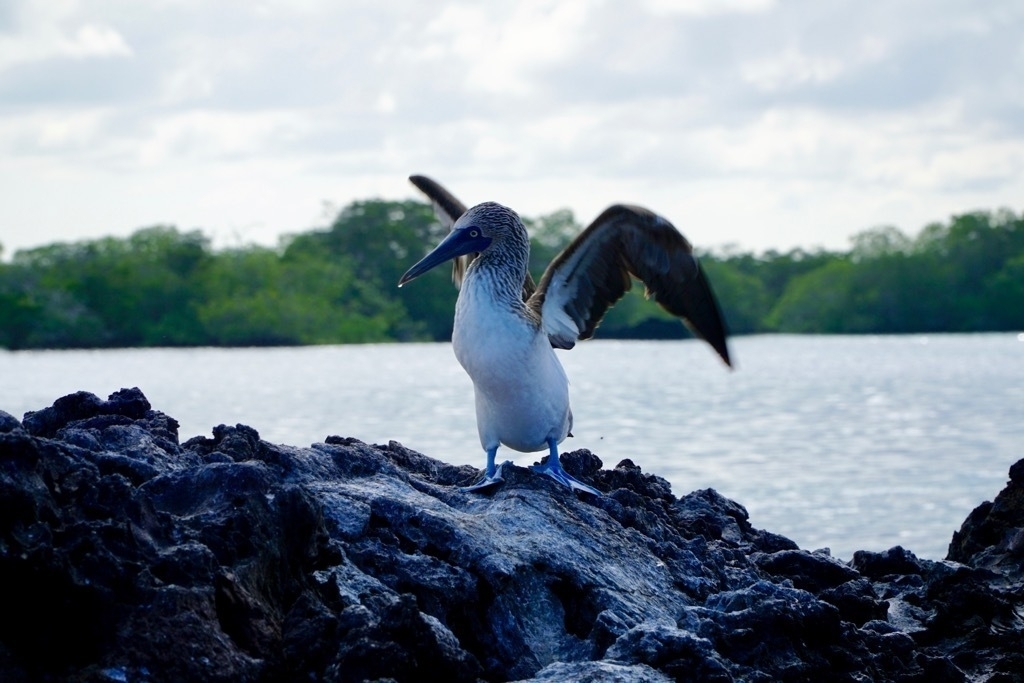 We also got very close to a few brown pelicans. 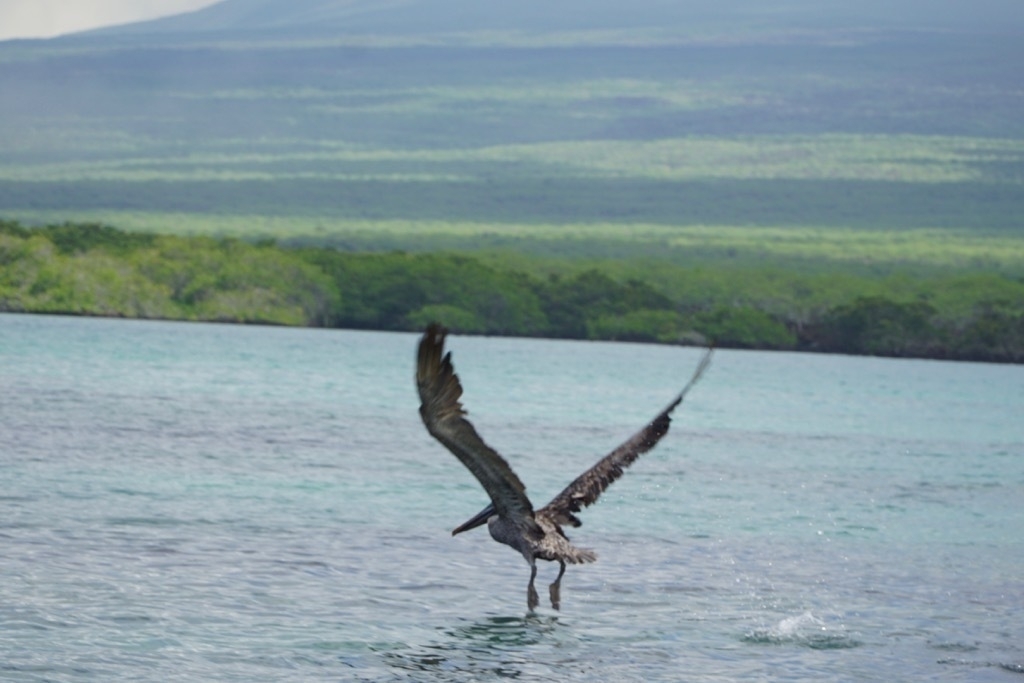 And we saw the Galapagos Penguin! The second smallest penguin in the world. 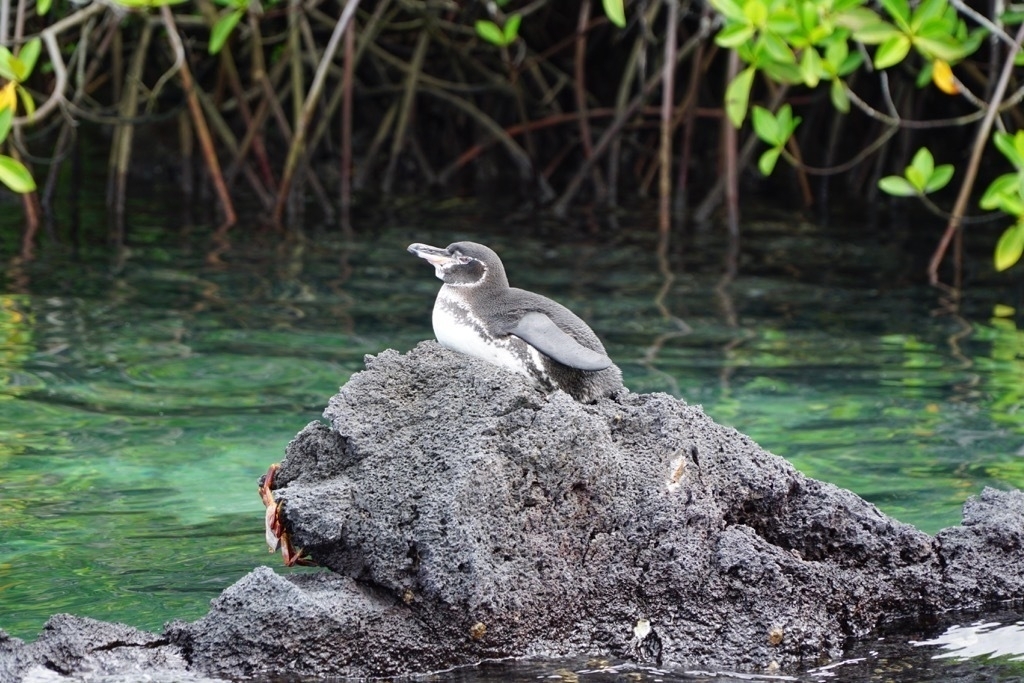 We saw turtles all over the place poking their heads out of the water, but it was not until the afternoon when we did our deep water snorkel that we really got to have a great view of the turtles. 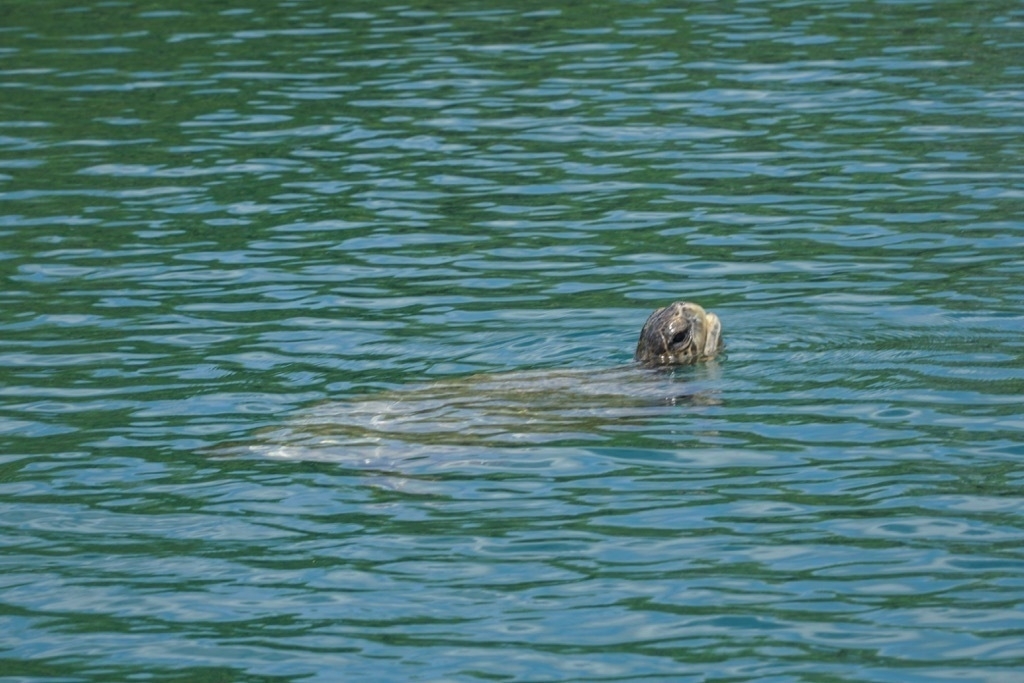 Toward the end of the trip we were way back amongst the mangroves and we saw a sea lion sleeping on a branch just a few feet above the water. We also had a very close encounter with a Great Blue Heron 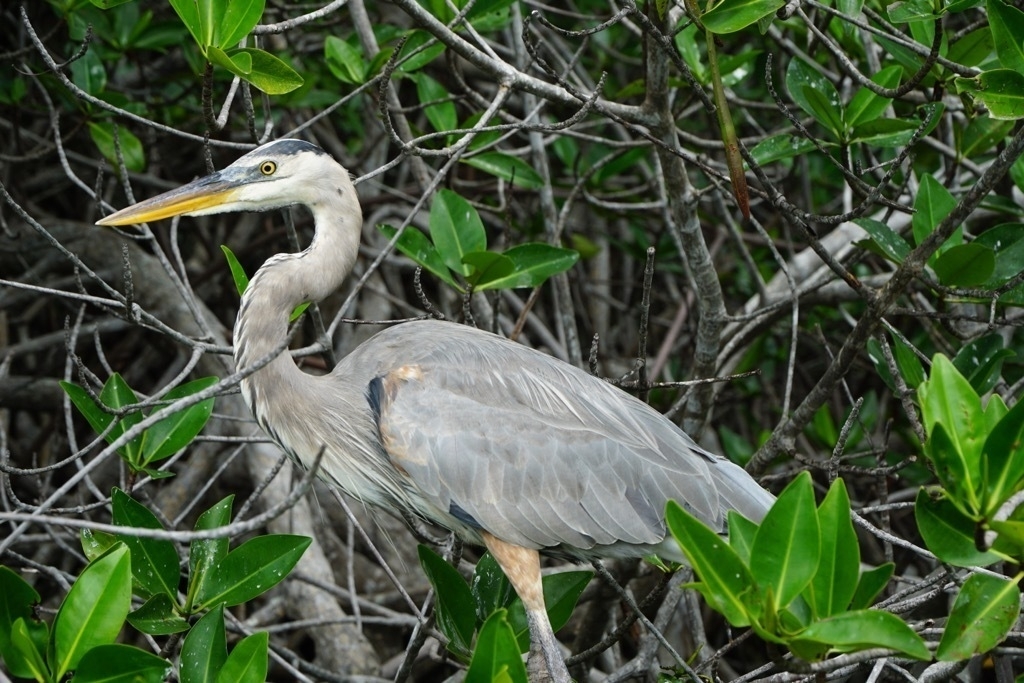 We were also lucky enough to see some golden rays swimming just beneath us. Too bad that we were not able to capture them on camera.

The afternoon was in Tagus bay where we started with a drift snorkel. It was great, we saw a lot of sea turtles, and fish, but the most amazing was when I got to watch one of the penguins swimming underwater.

After we dried off from the snorkel trip we headed out for the “fitness hike” This was billed as a faster paced walk with fewer stops but the same great scenery. With people of all different ages on the cruise the walks tend to go at the pace of the slowest person in the group so we thought this would be a good option. And it was. 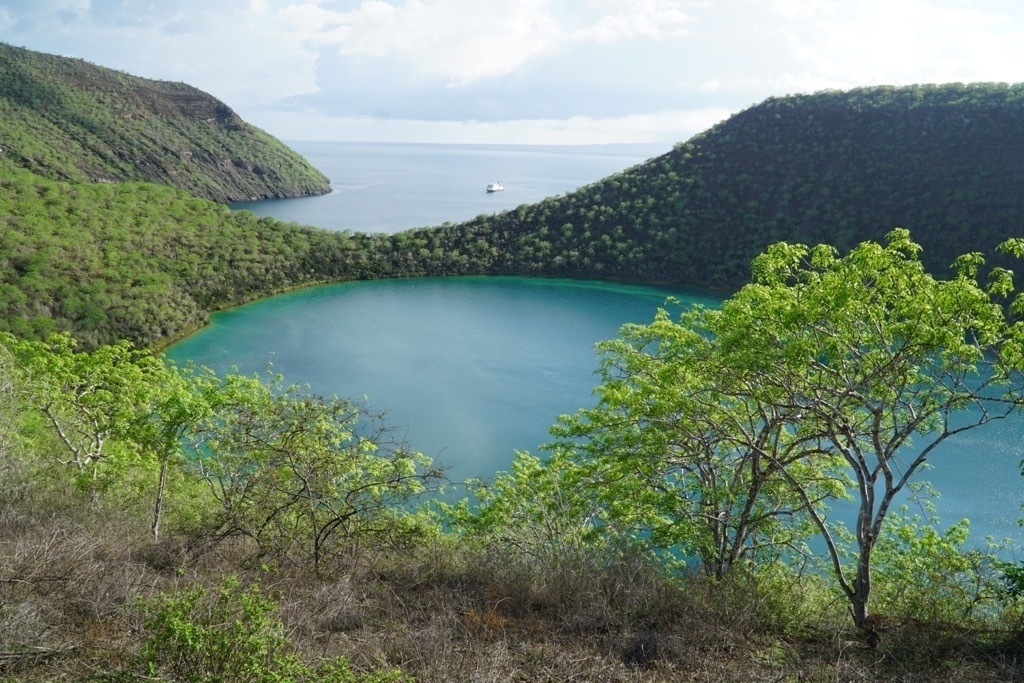 We climbed 150 stairs and then walked a bit to have a great view of the bay and this highly salty inland lake.

After a mile we came to the end of the trail where we could see the difference between the two sides of the volcano we were climbing. We were climbing the wet side and were suddenly treated to a huge vista of the dry side. You could images that you had just landed on mars! 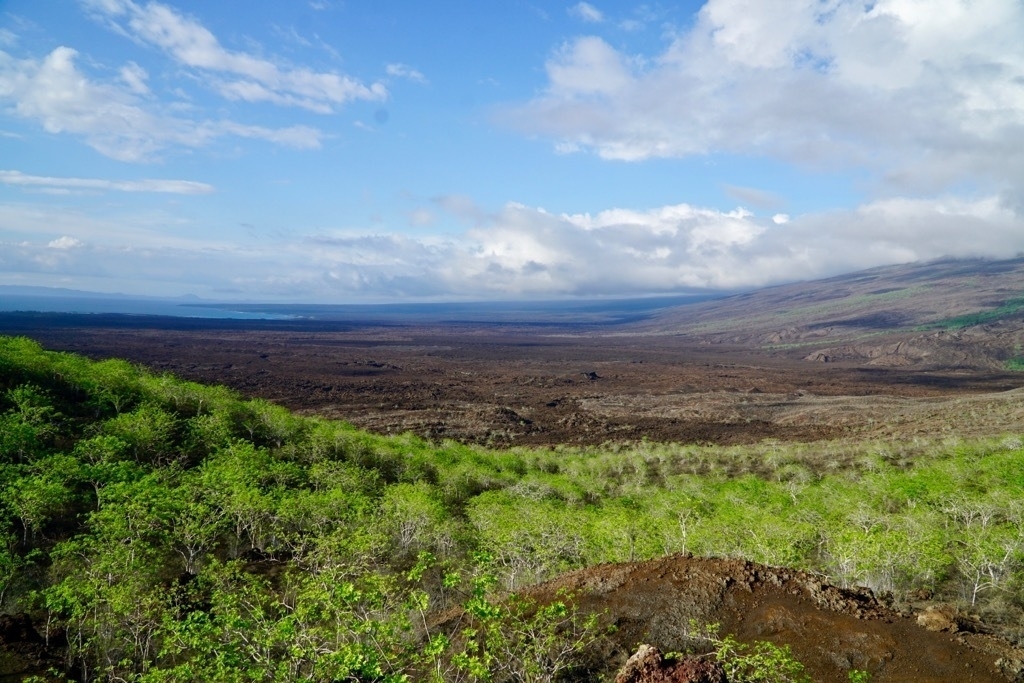 We took another short zodiac ride to view the geology of the volcano and some of the wildlife. Here you can see the layers where the older layers have oxidized! 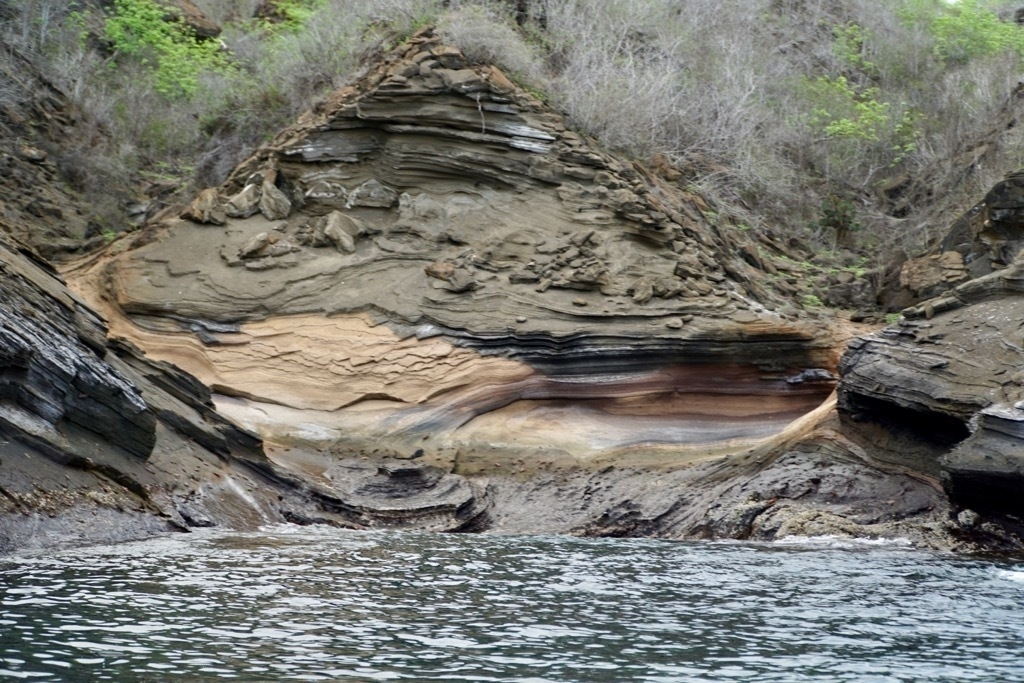 After we got back on the ship we had time to relax with a happy hour drink and enjoy the amazing sunset.

Up next was a delicious dinner where we watched one of our exhausted fellow passengers fall asleep right at her table with conversation and laughter going on all around her.

After dinner there was a small party to celebrate crossing the equator on our way around the north end of Isabella island. We were all encouraged to do the limbo and imitate one of our favorite Galapagos animals. As a group we did the blue footed boobie dance, and narrowly lost the contest to a couple imitating sea lions.