When is a vacation not a vacation? When you are on your third day in a row getting up between 4 and 5 AM. It turns out that the animals are on a little different schedule than we humans.

Our first morning at Tambopata we had to be in the boat at 4:30 to head to the island where we were going to observe the Colorado Clay lick. We were literally up before the birds in order to watch the birds have their breakfast. It turns out that the best theory for why the birds in this area lick the clay is that it is like a vitamin supplement, providing additional sodium and other minerals in their environment that they do not get from the other stuff that they eat.

We set up our viewing point across a narrow branch of the river from the clay and settled in on our stools before the sun came up. We had a bit of coffee to keep comfortable (and awake) as we listened to mostly the silence and waited. Soon the sun started to rise and we spotted a pair of Capibaras swimming in the channel, soon the the silence was broken by a few bird calls which continued to build and build until it was a raucous cacophony of Parrot and Macaw sounds! We saw thousands of Parrots and small green Macaws, we also saw many of the large reds and the blue and greens.

We returned from the clay lick in time for breakfast and a short break before our morning hike to the river overlook. Before we left we were lucky enough to get to watch the Macaw researchers climb the tree containing two Macaw chicks. These are part of their preservation research and so every couple of days they take the chicks out of the nest, weigh and measure them to make sure they are thriving. Macaws are not worried about the humans touching their chicks! In fact part of their research has shown that they will willingly adopt the chicks of other Macaws that are unable to care for their babies. Occasionally the Macaws will have 3 or even 4 eggs, however they are only able to forage for enough food for two chicks. So the last to be born are ignored. These researchers obtained permission to transplant these third or fourth children to nests where there is only one or even zero babies. The researcher told us about a nest that was struck by lightning and both babies were killed. After a time they moved two chicks into the care of the bereaved parents and after some initial confusion on their part the parents started to care for the new chicks. 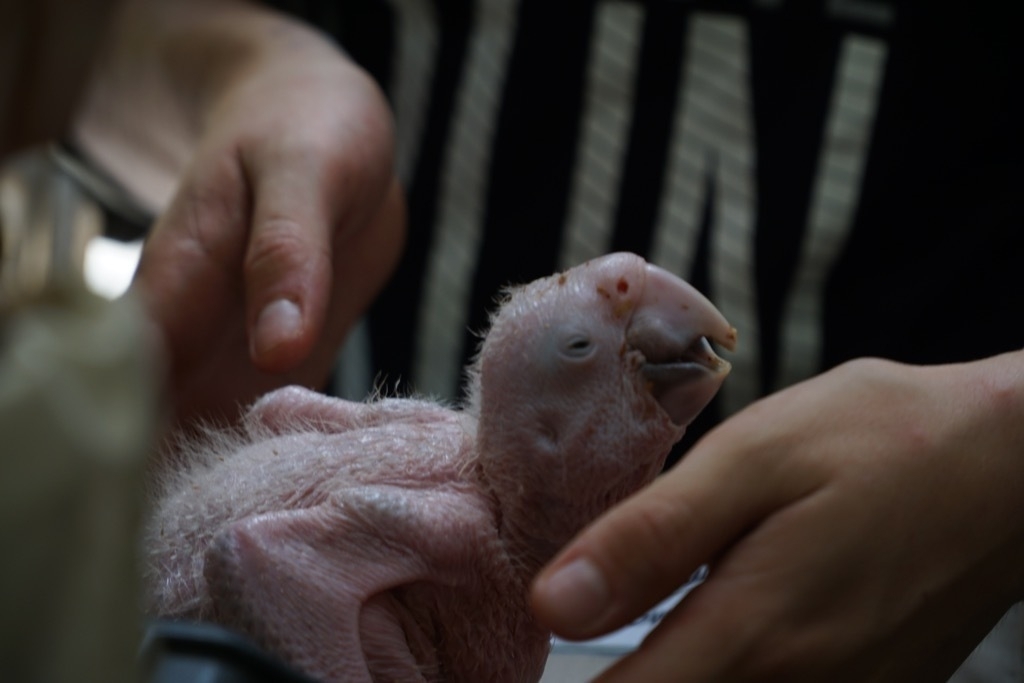 This next image is of the parents of the baby keeping a careful watch on the researcher who climbed up to the nest. 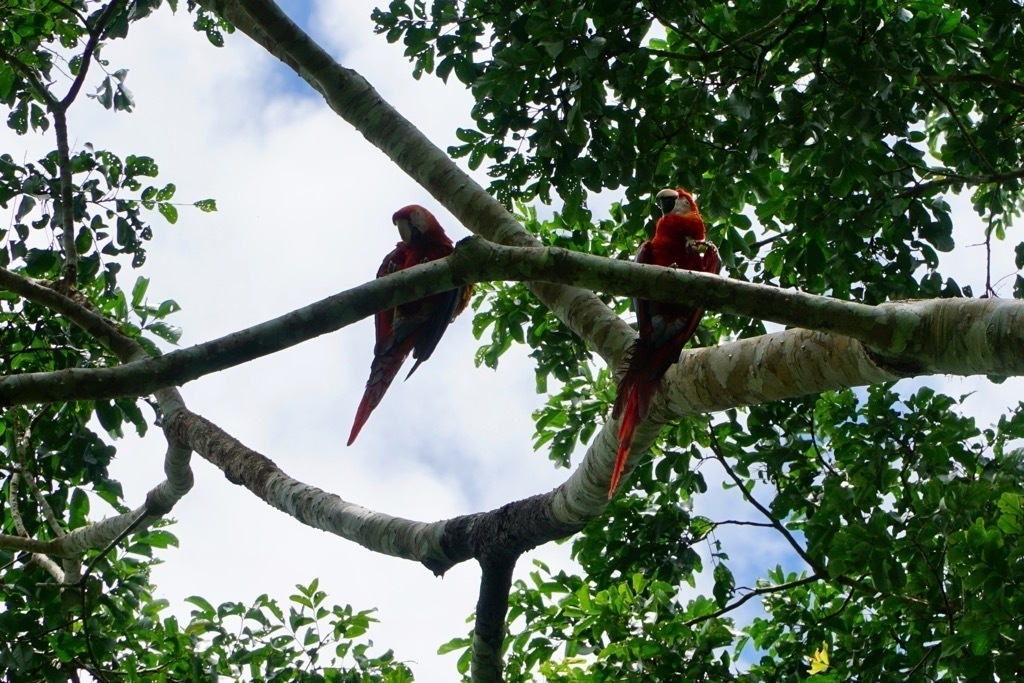 You never know what you are going to see on one of the jungle hikes, Today we saw a lot of butterflies and Macaws and spiders, some particularly rare bird that our guide was super excited about but didn’t seem that interesting to me. It was also super hot and really humid! It was all really interesting and once we got to the river we were treated to some great views. 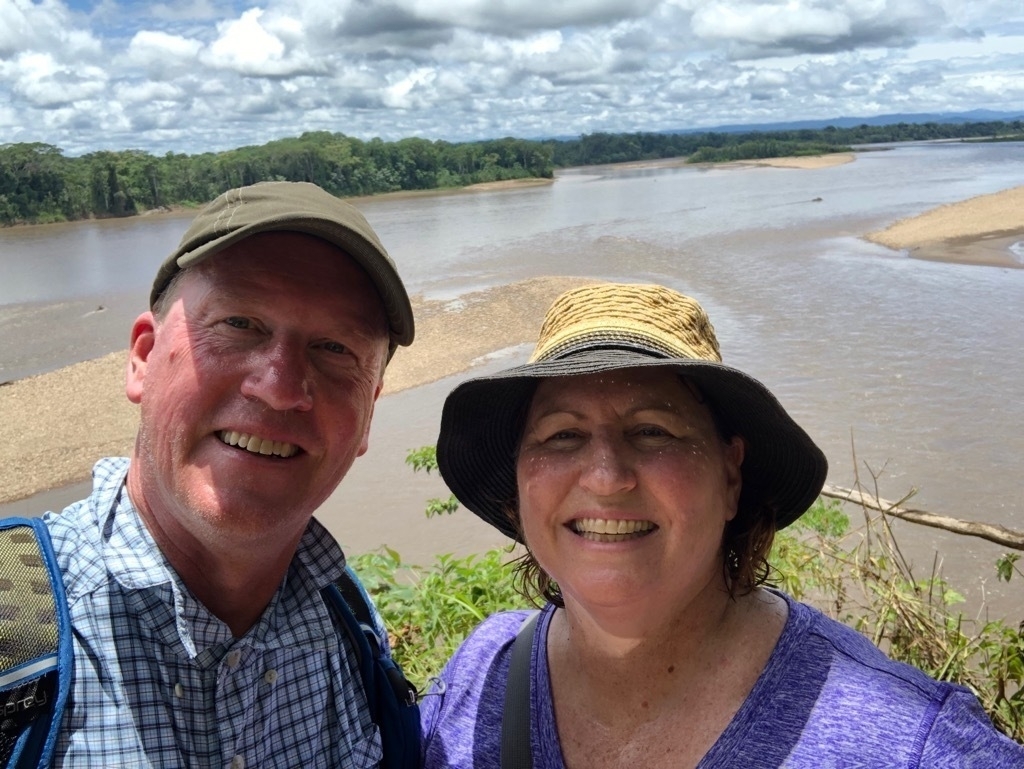 We decided that we were going to rest during the shorter afternoon hike and conserve our energy for the night hike.

The jungle walk in the dark was very cool. We stopped at one spot that we had walked by many times on the way to and from the river to observe a tarantula nest! Yikes! I can’t believe we walked by there all those times. I think there are millions of things in the jungle that we walk by all the time without noticing.

We also saw some pretty cool insects and even a scorpion hiding in the bark of a tree. 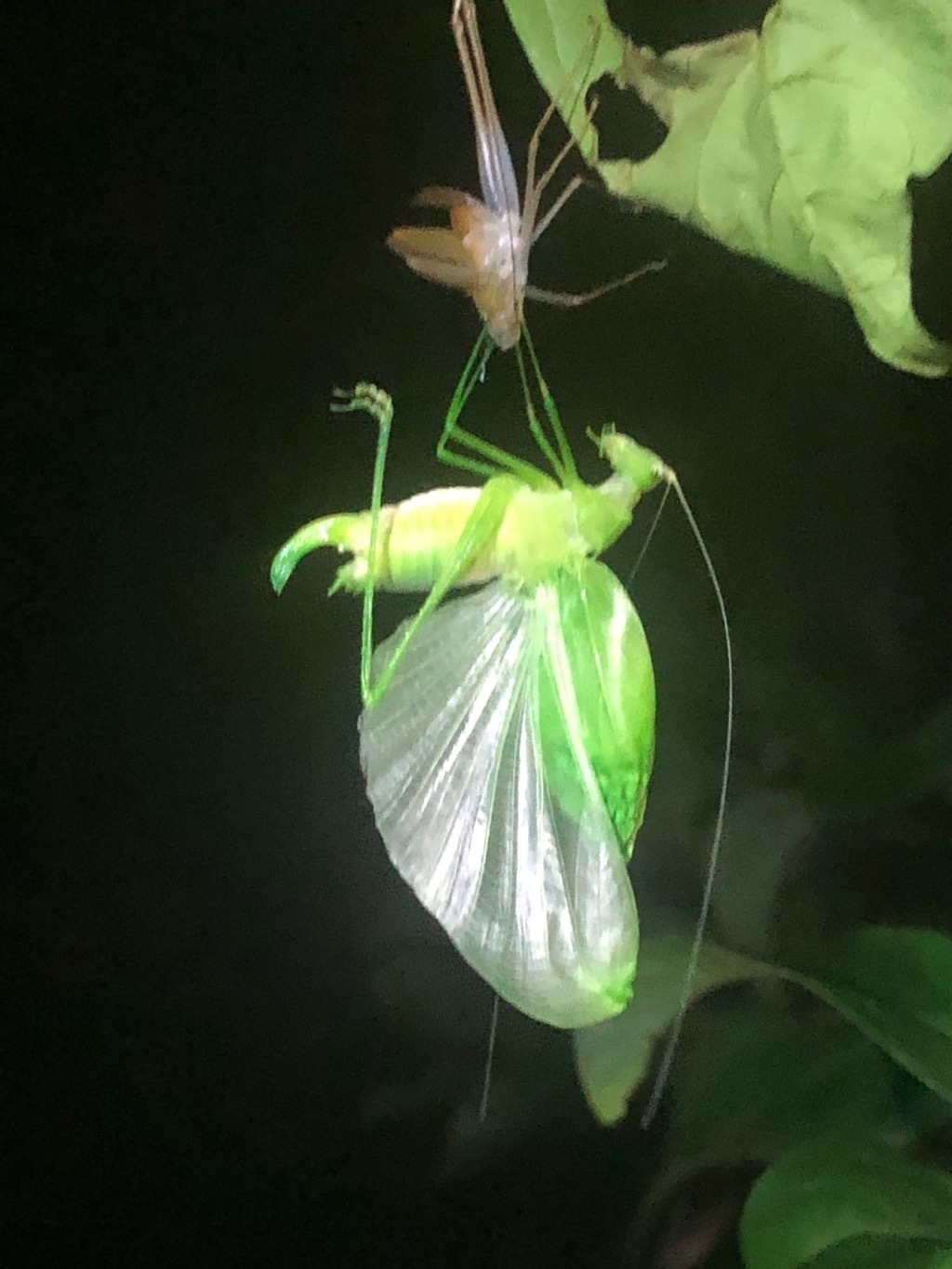 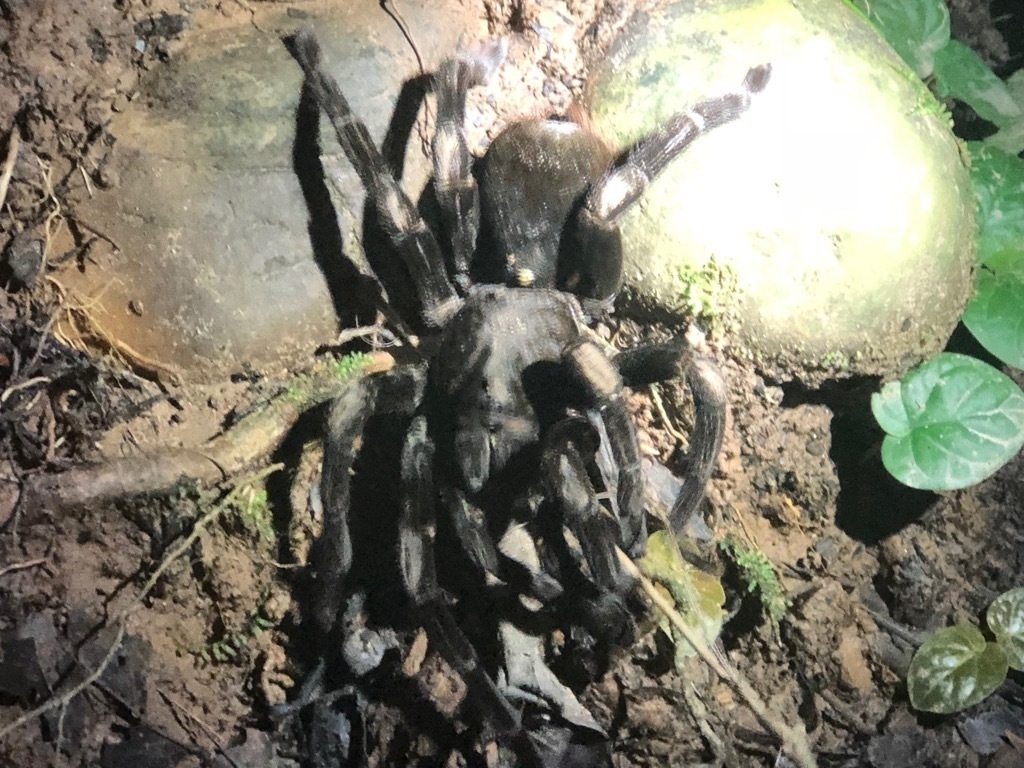 After the night hike we had to get our bags packed and outside our door so the porters could have them loaded onto the boat for our 5:15 AM departure back to civilization the next morning.

The trip back down the river went much faster than the trip up the river — we were going with the current after all. We saw a beautiful sunrise and had a very relaxing ride. 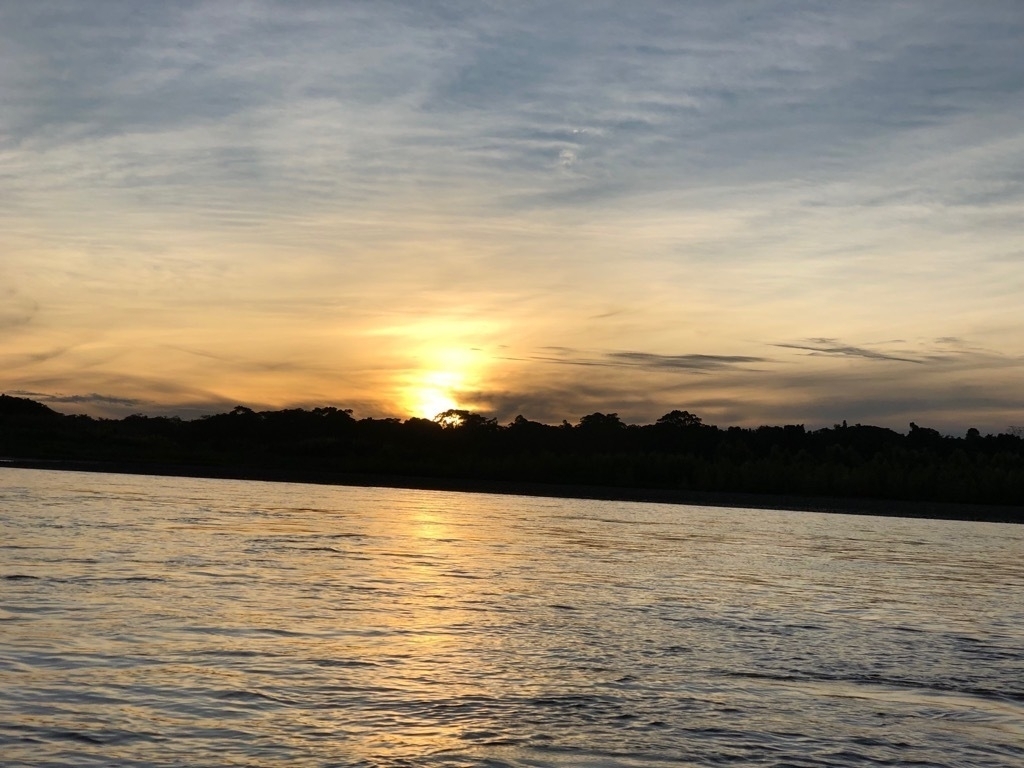 We are really glad that we made the effort to visit and appreciate this amazing part of our planet.

One of these trees served as the model for the trees in the movie Avatar, the other is inspired by the trees in Avatar. I’m sure you can guess which is which? We were lucky to see both of them in the span of two months. 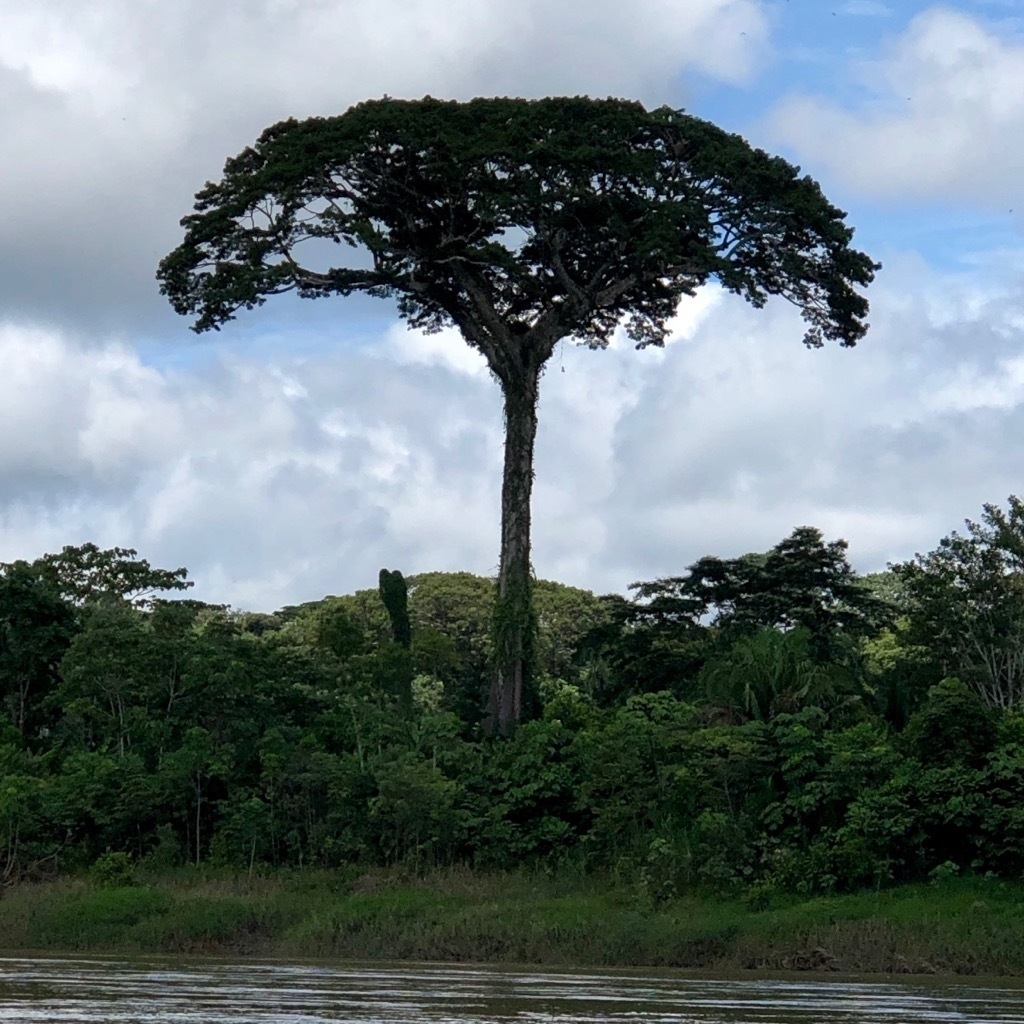 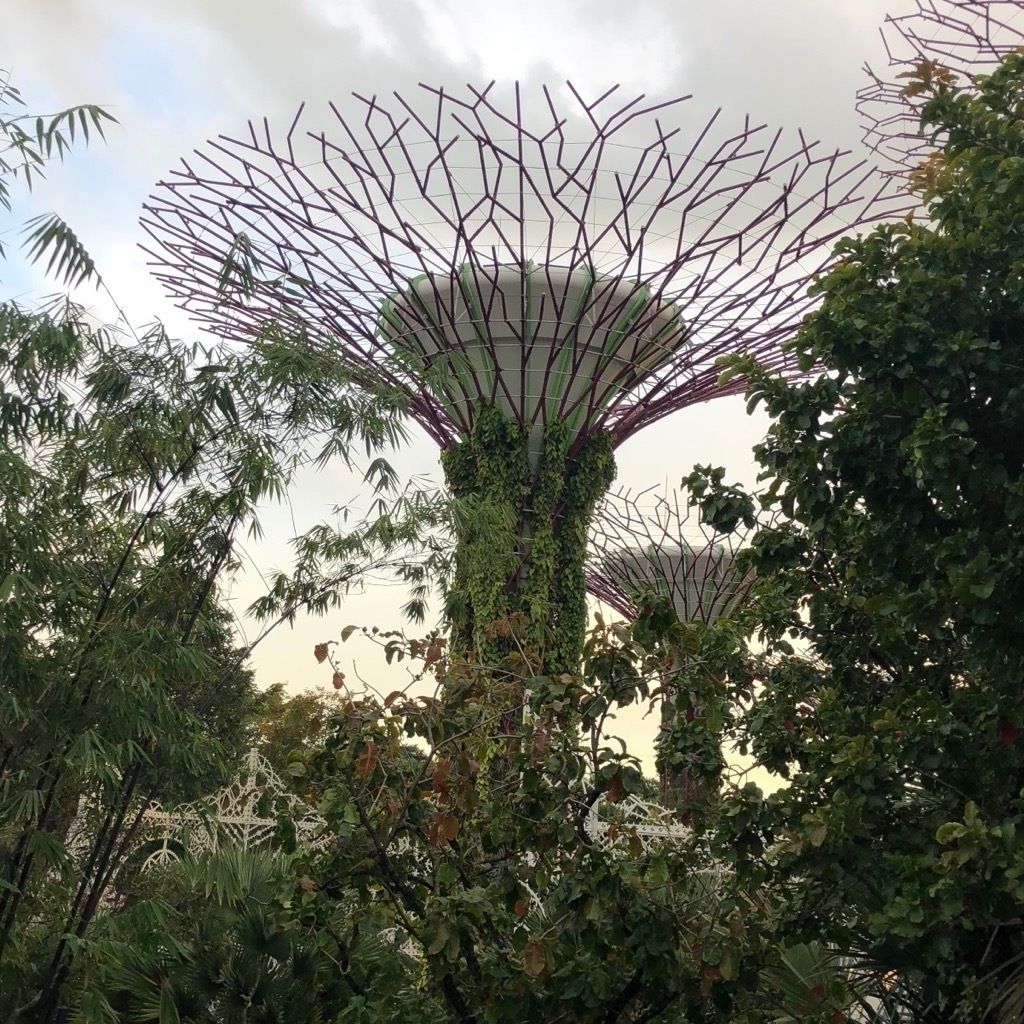