Sunrise to Sunset in Bagan, Myanmar

Sunrise to Sunset in Bagan, Myanmar

One of the cool things about this Azamara journey is that the ship stays for three nights in Yangon (old Rangoon) which allows some of the more adventurous travelers the opportunity to do an overnight trip to the interior of Myanmar (formerly known as Burma). Our friends Ann and Jerry got us very excited about seeing the temples of Bagan so this was the perfect opportunity to do that. 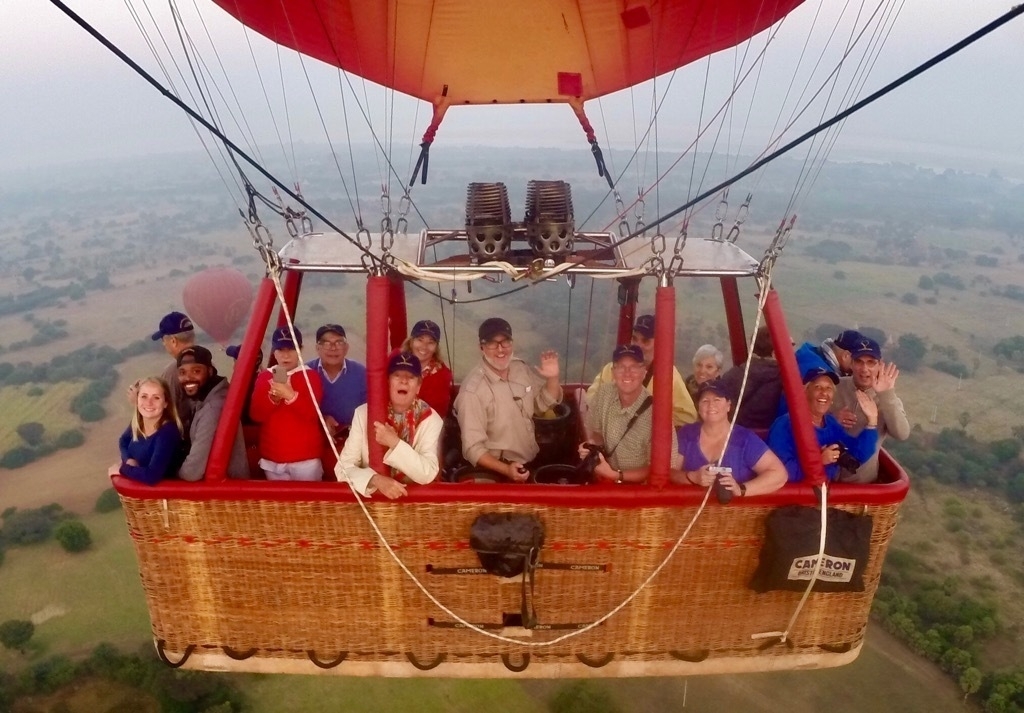 Jane worked with Trufflepig travel agency to plan our days to get the most out of the adventure. Which we definitely did as we were off the ship early on our first morning in port and were were among the very last handful of passengers to board less than an hour before we sailed away from Myanmar! Our first day was a fairly nice tour of Yangon. The main attraction is the huge gold covered Schwedagon Pagoda. They were in the midst of a project they do every five years to replace the gold plating on the dome of the pagoda. We saw families dressed in their finest bringing a 10 by 10 inch plate of gold to place in a small cart that would go by wire up to the dome where it would be put in place. This must be the most expensive pagoda in the world, as the very tip of the pagoda is encrusted with diamonds, rubies and sapphire gems worth millions.

The expense of the pagoda stands in stark contrast to everything around it. It seems that people are giving away their life savings to decorate this place. Its a part of the culture that I would definitely like to understand more about. I should also point out that Myanmar is also fairly well endowed with gold mines, diamond mines as well as mines containing rubies and sapphires. But like many of our other stops there is also a huge amount of poverty.

The flight to Bagan was about an hour aboard a propjet plane, and we were met by our guide, Mr. Htay, and driver for our time in Bagan for the short five minute ride to the Aureum Palace Hotel. A beautiful 5 star hotel where the bathroom in our villa was bigger than our entire stateroom on the ship! The dining and pool areas of the hotel overlook several smaller pagoda (pagodas? pagodi?). Although it was still only around 7pm we ate dinner at the hotel. The menu was a very international menu including burmese, Thai, Italian, and American fare. Our server recommended anything from the Thai menu as the chef was from Thailand and very good. I had the Pad Bai Kra Prao Gai -- something I’m determined to cook at home. its a bit similar to Laarb but spicy instead of bright and fresh. Its ground chicken mixed with spices and spicy basil served over rice.

After dinner it was early to bed, partly because I was suffering from a nasty cold and partly because we knew we had a 4:40 alarm set to get up for our balloon ride the next morning! I slept well until 2AM and then spent the rest of the night tossing and turning waiting for that early alarm to go off, and anticipating the balloon ride! See the gallery at the end of this post for a bunch of photos.

We travelled to the launch site in a Carbus! The Carbus is a vehicle that was made in Canada and used by the Allies in World War II. At the end of the war there were 206,000 of these vehicles in Burma but it was too expensive to ship them all back home so they were just left here. Over the years the burmese have restored them, replaced and engines, and used them for various purposes. The windows were open air, or you could pull up some wooden shutters to block the early morning breeze which we did since it was the first time since leaving home that we were a bit chilly. (it was probably 69 degrees out) 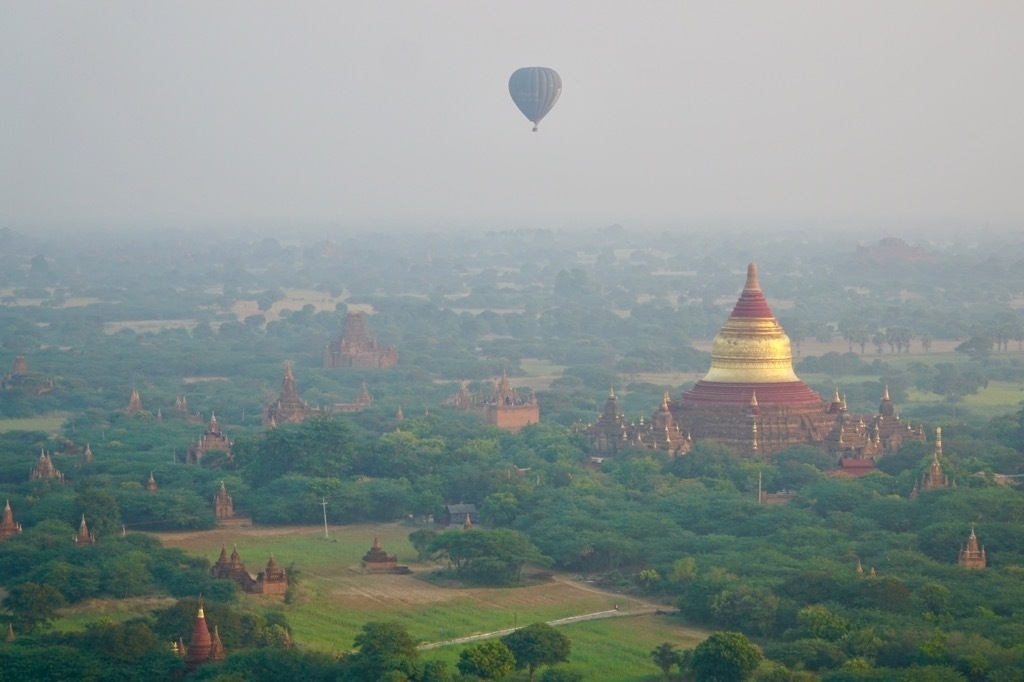 We arrived at the launch site in darkness where they had coffee and tea waiting for us and then it was on to our safety briefing. As the sky began to turn gray in the east the safety briefing was over and it was time to inflate the balloons! What a fascinating process, to watch them start up fans and then run around inside the balloon making sure everything was in place. After the balloons were about three quarters inflated they started the burners and started shooting flames into the balloon, which very quickly became upright and ready for us to board! There were sixteen passengers in four compartments of the basket. The pilot, Fernando, was in the middle with his tanks of fuel and his ipads to show the wind speeds at various altitudes. it took a lot of hot air to get all seventeen of us into the air, but it was so gentle and amazing that you didn’t even realize you were leaving the ground. Once airborn we were all just mesmerized by everything! temples in every direction and the sun just peeking over the horizon.

We were probably in the air for a little over an hour and I alternated between madly taking pictures trying to capture the experience and just leaving my camera hanging so I could fully enjoy the experience! There were 23 balloons in the air that morning and part of the beauty of the experience was seeing all of the other balloons around us. It was all over too quickly when we landed (on our second attempt) in the middle of a field. Our pilot had to hold a delicate balance between letting the balloon deflate a bit versus keeping it upright enough so that the basket didn’t tip and drag until the ground crew caught up with us.

After we got out of the balloon we celebrated our journey with an early morning champagne toast. The first balloon flight was in the Champagne region of france so apparently this is a tradition followed after all balloon flights. Our pilot got into ballooning when he got fed up waiting for parts for an ultralight plane. Now he owns his own company in Spain, and spends five months of the year in Bagan doing balloon rides and five months in the south of france doing balloon rides. Quite an interesting life if you ask me!

After the balloon we returned in our Carbus to the hotel where we cleaned up, had breakfast and then met our guide for our eBike tour of the temples of Bagan. the eBike was a great way to explore the backroads around the temples. We explored a few that were off the beaten path and getting a bit overgrown, and then we saw a few of the popular ones that we had seen from the air. It was really interesting to have a good guide for this part of the trip as the walls of the temples are like history books. The different paintings and the stories they all tell always make me wish I had done more homework before visiting. 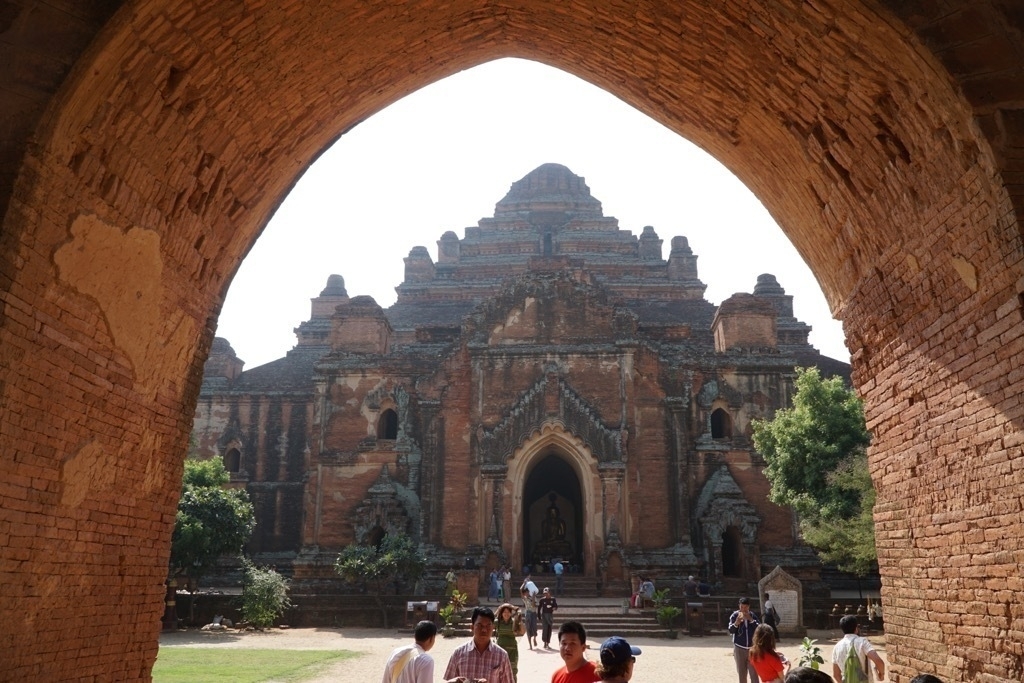 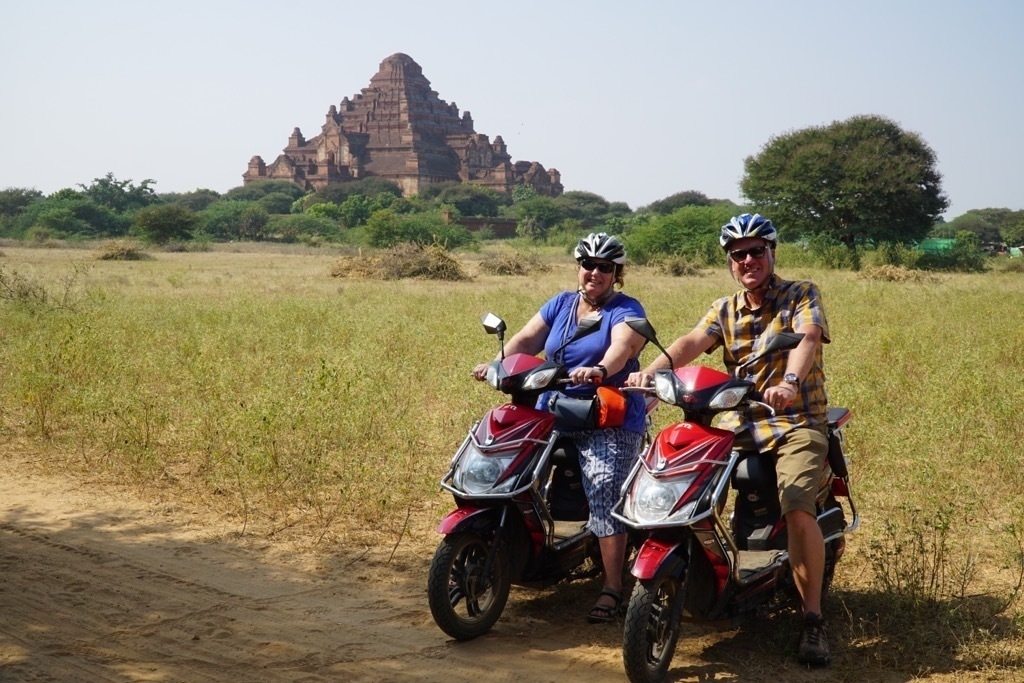 After a few hours of “templing” we drove our scooters to a monastery and had a huge burmese lunch. It is said that one of the kings in Bagan never had a meal with less than 300 dishes. We had 30. The traditional meal is to have a main curry and rice dish and then many many side dishes. We had two different beef curries and one chicken curry. That leaves 27 different side dishes. From tofu to pickled bean sprouts to mashed gooseberries to spicy toasted nuts. We managed to try a bit of everything between us. Many of them we didn’t like at all because they were just too bitter for our western taste buds. I’m not sure that even my friend (JMS) would have cleaned up all the food they served us. 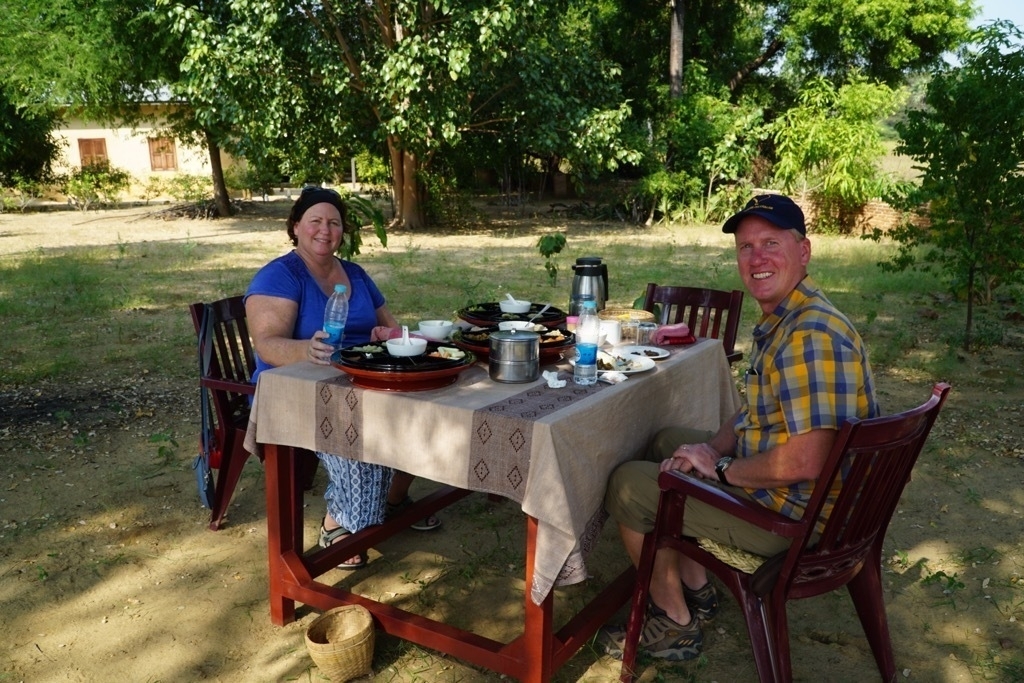 One of the best things about our guide was that he didn’t overdue the temples. After lunch he said we could continue if we wanted or we could go back to the room for some rest and refreshment before he picked us up at 4:00 for our carriage ride and sunset watching. We opted for resting and trying out the rum sour drinks from the hotel bar that our guide had recommended we sample. They were very refreshing all on their own.

The carriage ride was very peacful and the sunset was beautiful. 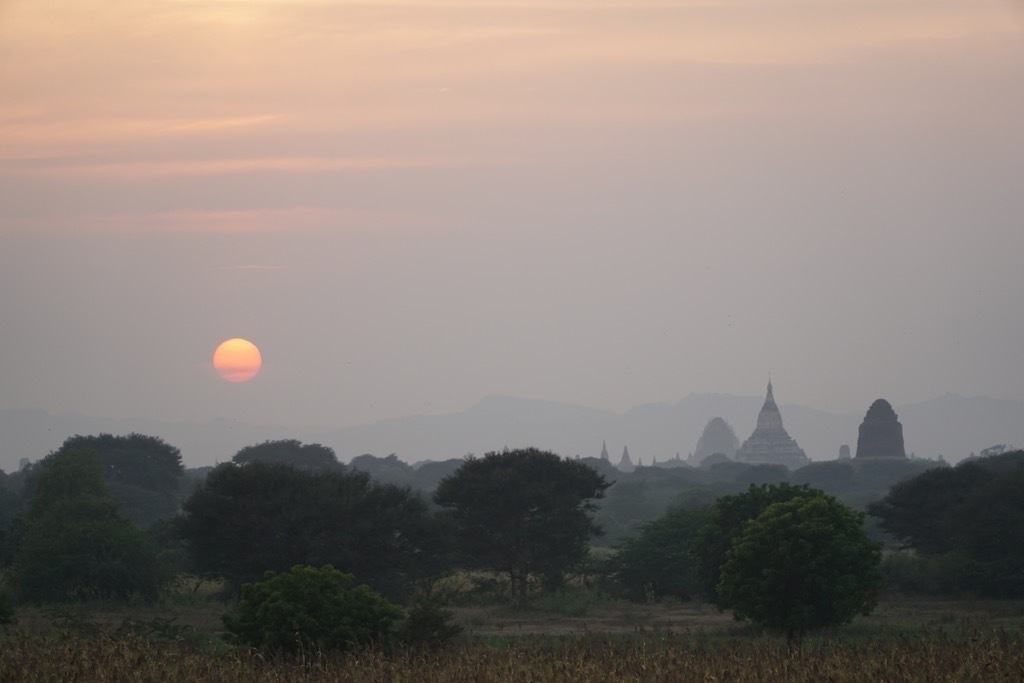 After sunset we were beat, so we had an early dinner by the pool and enjoyed the reflection of the nearby temples in pool. It was another early night to bed as we knew we were off to the airport first thing in the morning.

My one worry about the hole Bagan adventure had been that we were not leaving ourselves a very good safety margin for getting back to the ship at the end of it all. Our flight was schedule to arrive at 10:10 and the roads and traffic in Yangon are so bad that it takes at least an hour and a half to drive from the port to the airport. With our ship leaving at 1:00 I would have liked a bit more time. On top of that virtually everyone we met was flying back the night before for that very reason. Of course they all missed the sunset. So... when the time to board our plane passed and the ground crew told me that our flight was delayed by 30 minutes due to weather in Heho my stomach began to churn a bit. My internal safety deadline of 11:00 was getting uncomfortably close. Of course we knew that we had our passports and credit cards and more than a day to catch up with the ship in Phuket if we “missed the boat.” So there really wasn’t anything to worry about. But sometimes you still do even when you shouldn’t. Our plane landed at 10:50 and our guide was waiting for us. He joked that they had the privte jet all fueled up and ready to take us to Phuket, but we made it back to the ship before it sailed anyway.