Prelude to a Recreational Vehicle 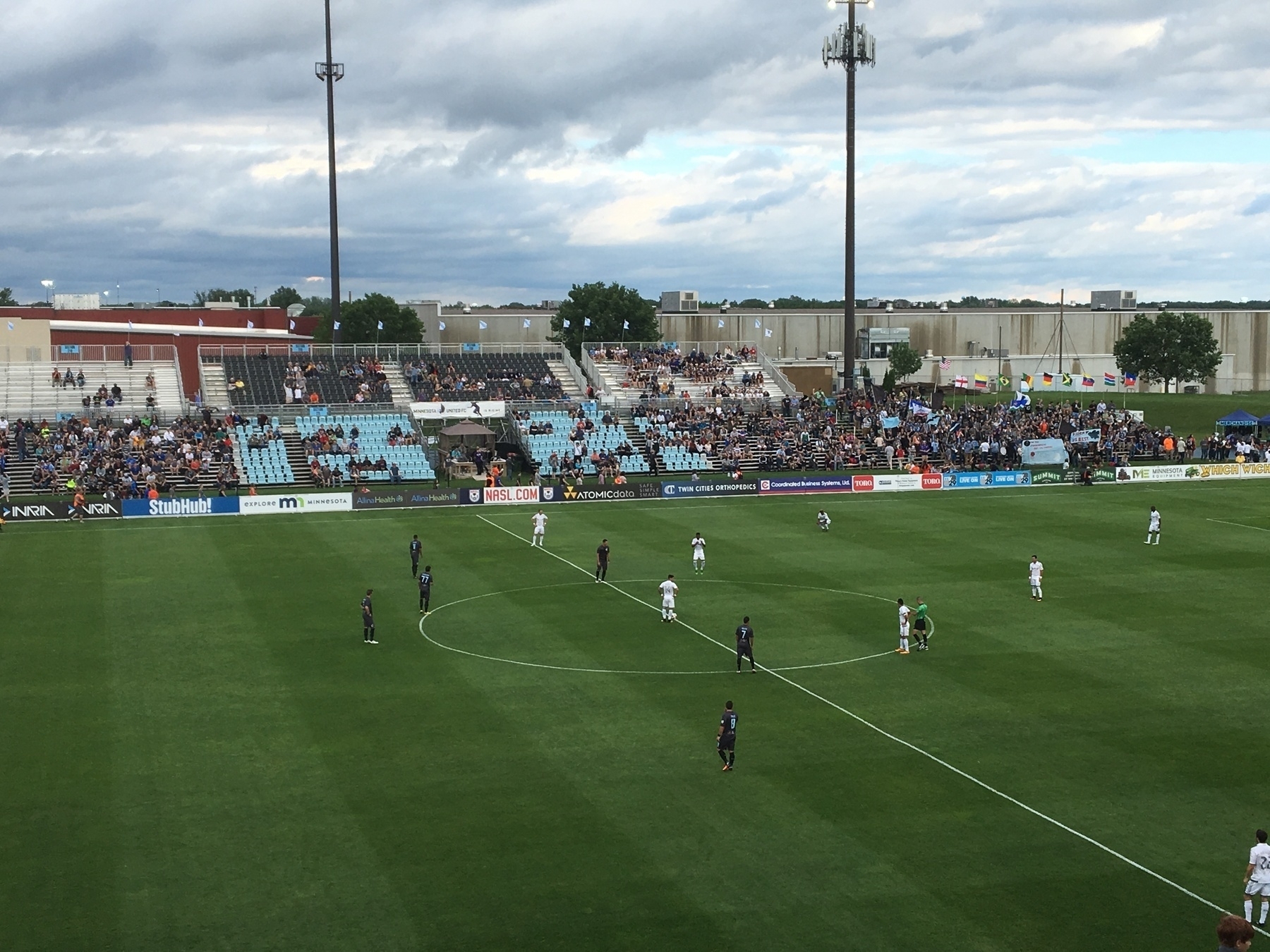 In preparation for our big RV adventure Brian, Holly, Jane and I all attended the Minnesota United FC match tonight. The match was played against Sporting KC as part of the open tournament, similar to the FA cup in England. We arrived early to check out the food trucks and the atmosphere around the stadium that the regulars refer to as the Nessi (National Sports Center NSC, get it?).

As we were enjoying our Bahn Mi sandwiches and a nice Summit EPA a dude dressed as a blue dinosaur/shark with a megaphone came to stand beside us. He proceeded to start heckling the Sporting KC keeper and his coach, as they were going through their pregame drills. We thought it was a bit odd that he sounded pretty normal when he was chatting with other people (obviously he’s a regular at the games) but his heckling voice had a definite Scottish brogue to it. As the Sporting KC players were taking their shots on goal we noticed that the last of the shots were all going over the bar and getting increasingly close to this guy (and us). The final shot was right on target as it hit him right in the megaphone. Later we learned that he was sort of a mascot called Nessi. Apparently the Loch Ness monster must look like a blue dino. It all makes sense now, even the Scottish accent.

The first half of the game was a bit boring to be honest. The ref seemed content to let pretty much everything go with nothing but a stern talking to, the Loons had no shots on goal, no corners and no points.

Things picked up a lot in the second half, including the referees use of the yellow card. There should have been a red as on of the KC players attacked a MUFC player from behind. Then KC scored first on a very dubious handball in the box. I hate it when a player goes down and they call a handball on that player when the ball hits the arm on the ground. Sacrifice your face and let yourself fall on your nose so you don’t get a handball. Benny Fielhaber took the PK and made it 1 - nil for KC. Suddenly the game came to life. The Loons definitely started to get more of the ball and went on the attack much more often. KC seemed to get more and more aggressive with their tackles as the guys in green let them play while punishing the Minnesotans for even the most minor of infractions. Eventually their evil ways caught up with them and Minnesota was awarded a PK for a really vicious tackle in the box. 1-1, game on.

Regular time ended in a draw so we went to overtime. KC seemed to find another gear and I had the sense that it was only a matter of time until they scored and put the game away. Which they did only to have the goal ruled out for offsides. A few minutes later they came back and scored again. Minnesota tried desperately to get back in it, but never really got a shot on target to level things out.