“You want a fish!?” Said the night watchman with confusion. “No,” I said, “do you have a cork-screw?” doing my best imitation of screwing in a corkscrew and then pulling out the cork. “Ah! One moment” And off he went, out the front door and into the restaurant across the street. Moments later he was back with an excellent corkscrew, which I used to uncork the bottle we had purchased around the corner and then returned to him. After I got back to the room I could not contain my laughter any more. A fish? The fact that he borrowed the corkscrew from the restaurant, which was the very thing that Jane had suggested in the first place. An idea that I soundly rejected. Hi, I know that we didn’t eat dinner here or buy anything from you but would you mind terribly if I borrowed your corkscrew to open the bottle of wine I bought at the market around the corner? I just can’t imagine myself saything those words.

A glass of wine was a great way to cap off what had been a very full day of touring around the old city of Istanbul. Once known as Constantinople, it was the head of the Christian world. Then under the Ottoman empire it became a Muslim country. Today, Turkey is largly muslim, but the government is a secular government. We began with a tour of Topkapi Palace were we visited the treasury, and the Harem and saw the Sultans private rooms. We also visited the tulip gardens. It is an interesting fact that although Holland is usually celebrated for its tulips, the Dutch took them and transplated the tulips from Istanbul originally! 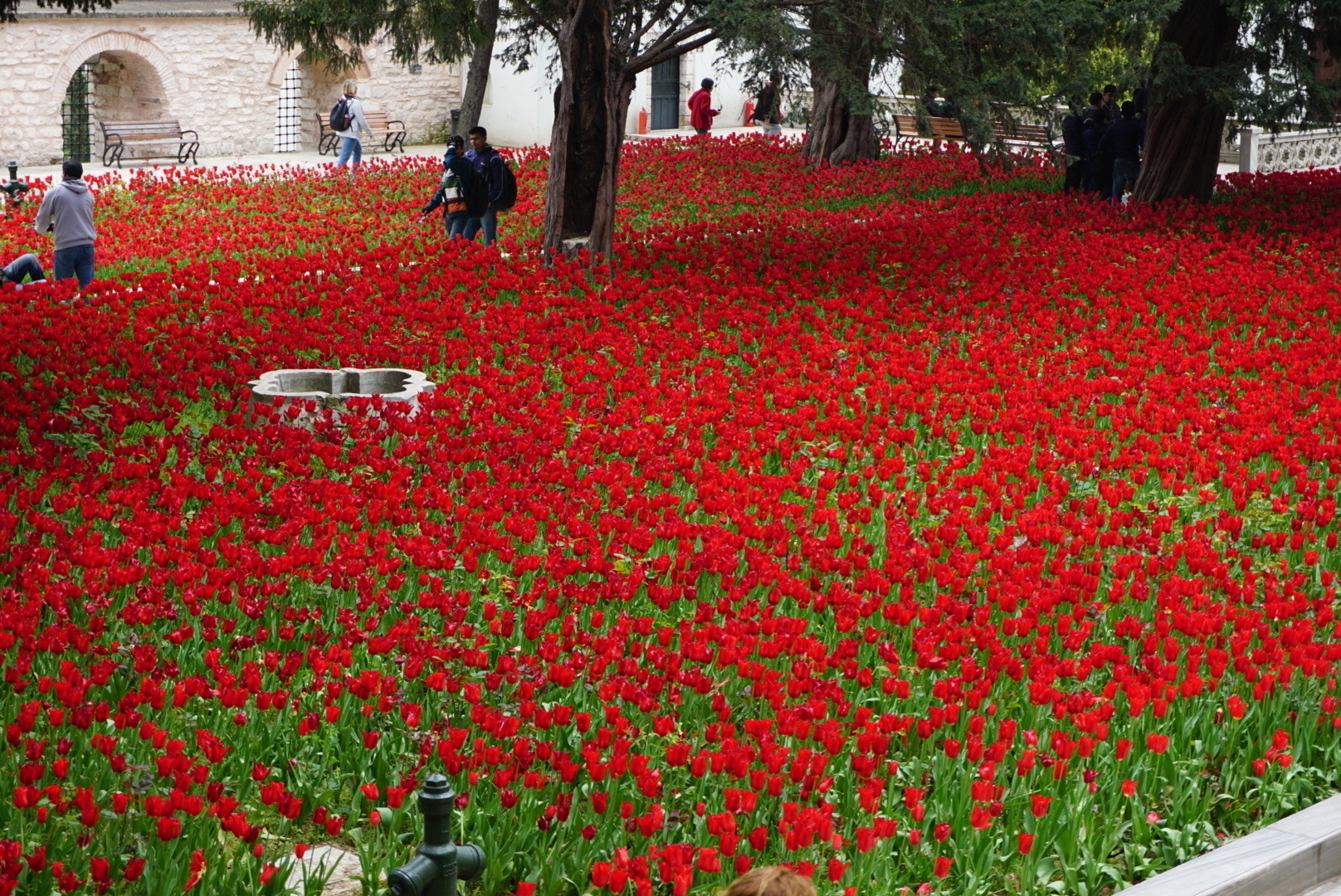 In the hall of mirrors, I told students about recursion. 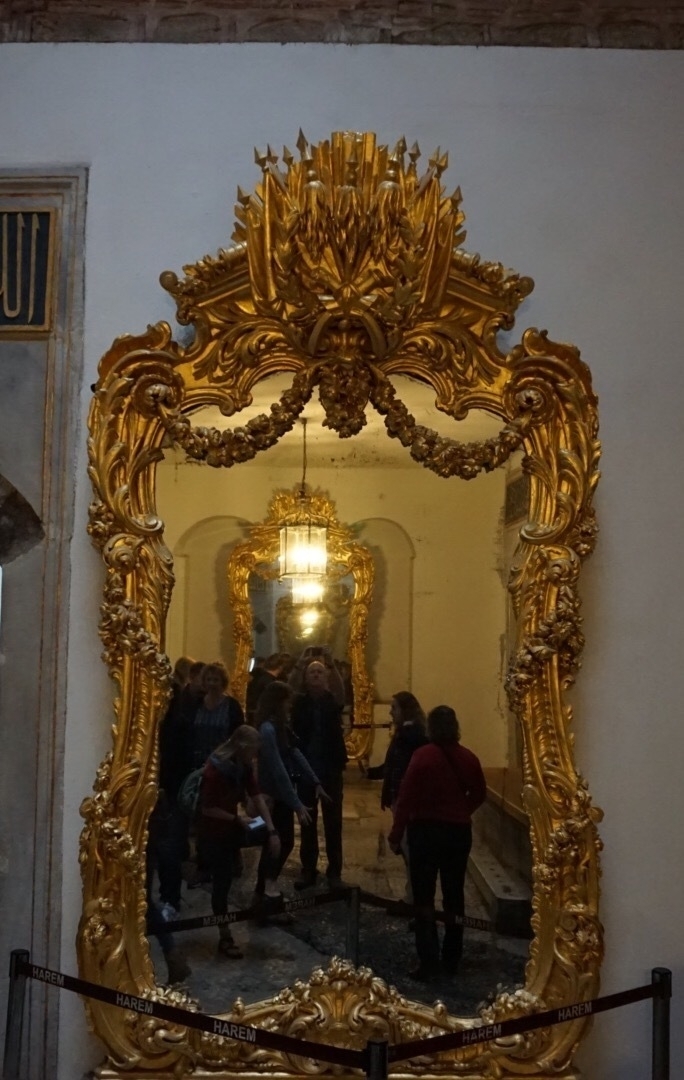 They did not care.

From the Palace we moved on to the Blue Mosque, one of the icons of Istanbul. There was a really long line to get in, but we made the best of it, while Ben ran into someone with nearly the same last name as him in line. He turned out to be from wisconsin, and has relatives in Decorah. Small world. The line was rather entertaining, as standing in line appears to be optional for many tourists here in Istanbul. However all of the guides team up to try and send the line jumpers to the end. It is interesting to see the reaction of the people who clearly know they are being jerks and getting called out for it. Once we got inside it was amazing. It is so hard to describe this space, like St. Peters in Rome it is just so large that you cannot hope to capture the scale of the whole thing. 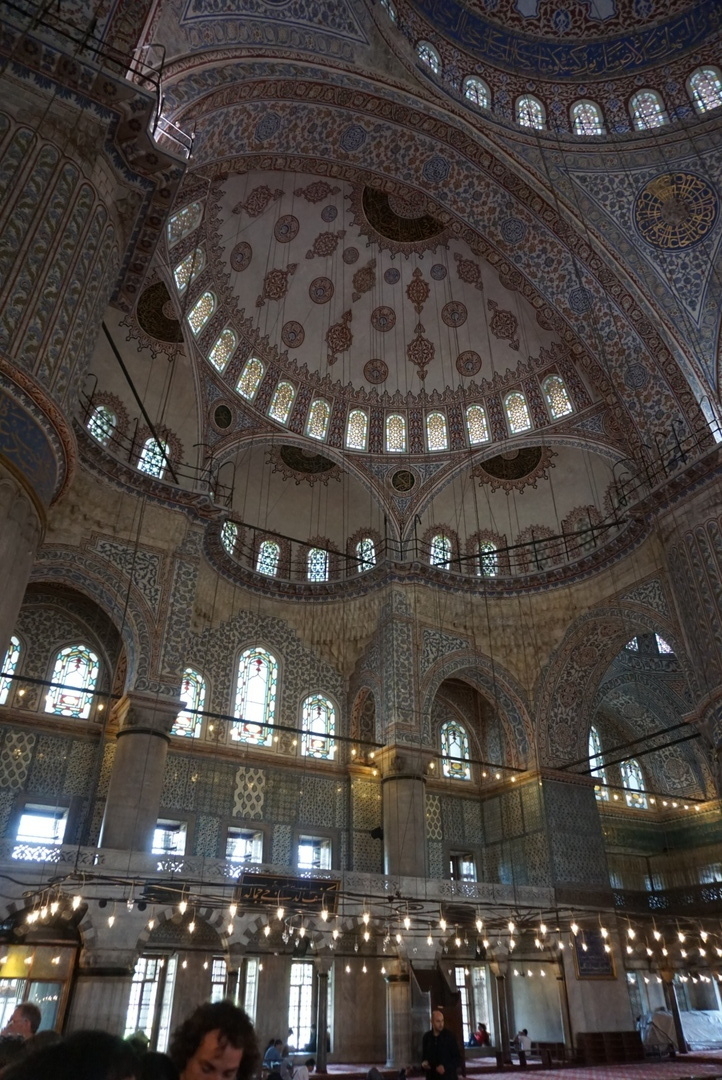 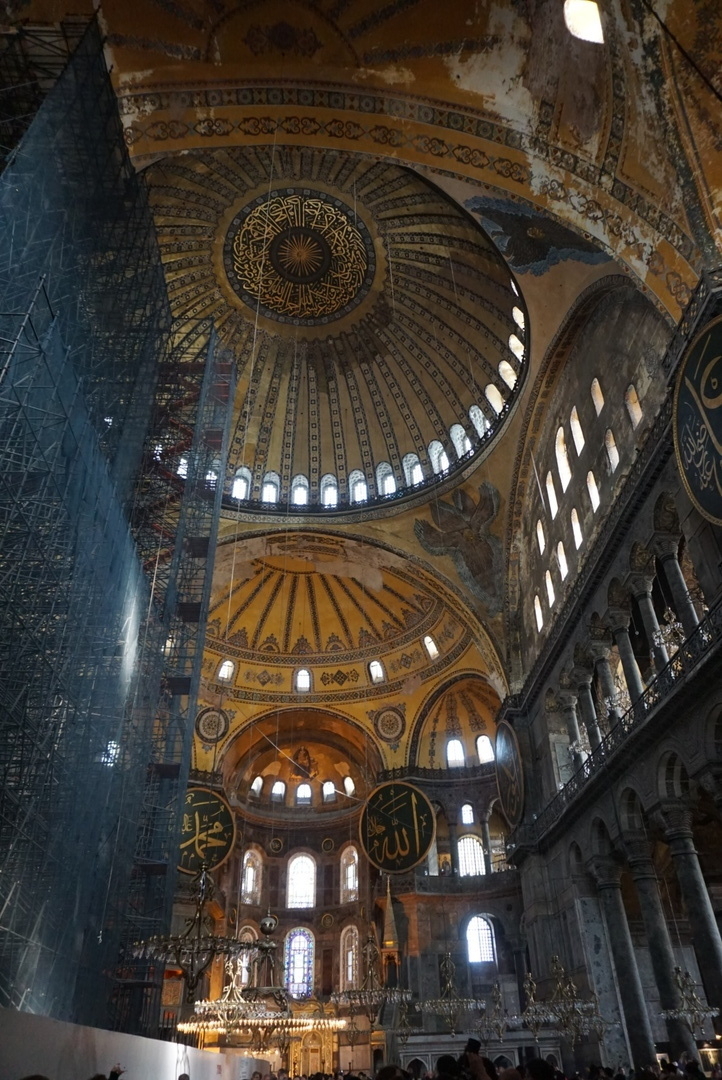 Across a very large square from the Blue Mosque is Hagia Sofia. This was once the largest Christian church in the world. Of course it was later supplanted by St. Peters and others. The really interesting thing about Hagia Sofia is that it was converted to a Mosque.

Check out the apse of the church in this next picture. Notice that the alcove is not centered. This is because even though the church was sited east to west, the axis was just eleven degrees off of the line to Mecca. Because Muslims do not allow for images in their mosques all of the mosaics were covered in whitewash and then painted over in more typical muslim designs. Except for the Seraphim. Look at the two images below: 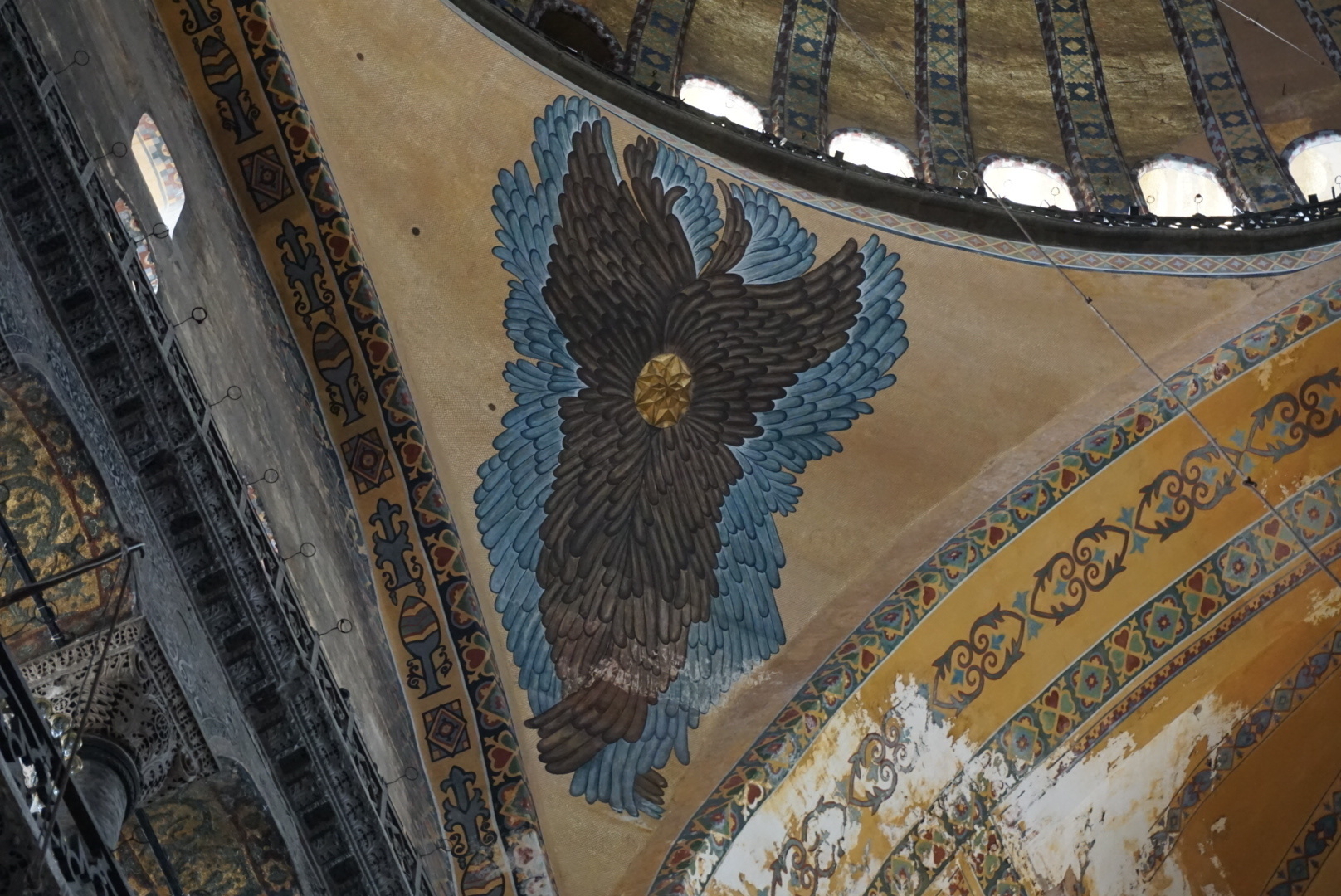 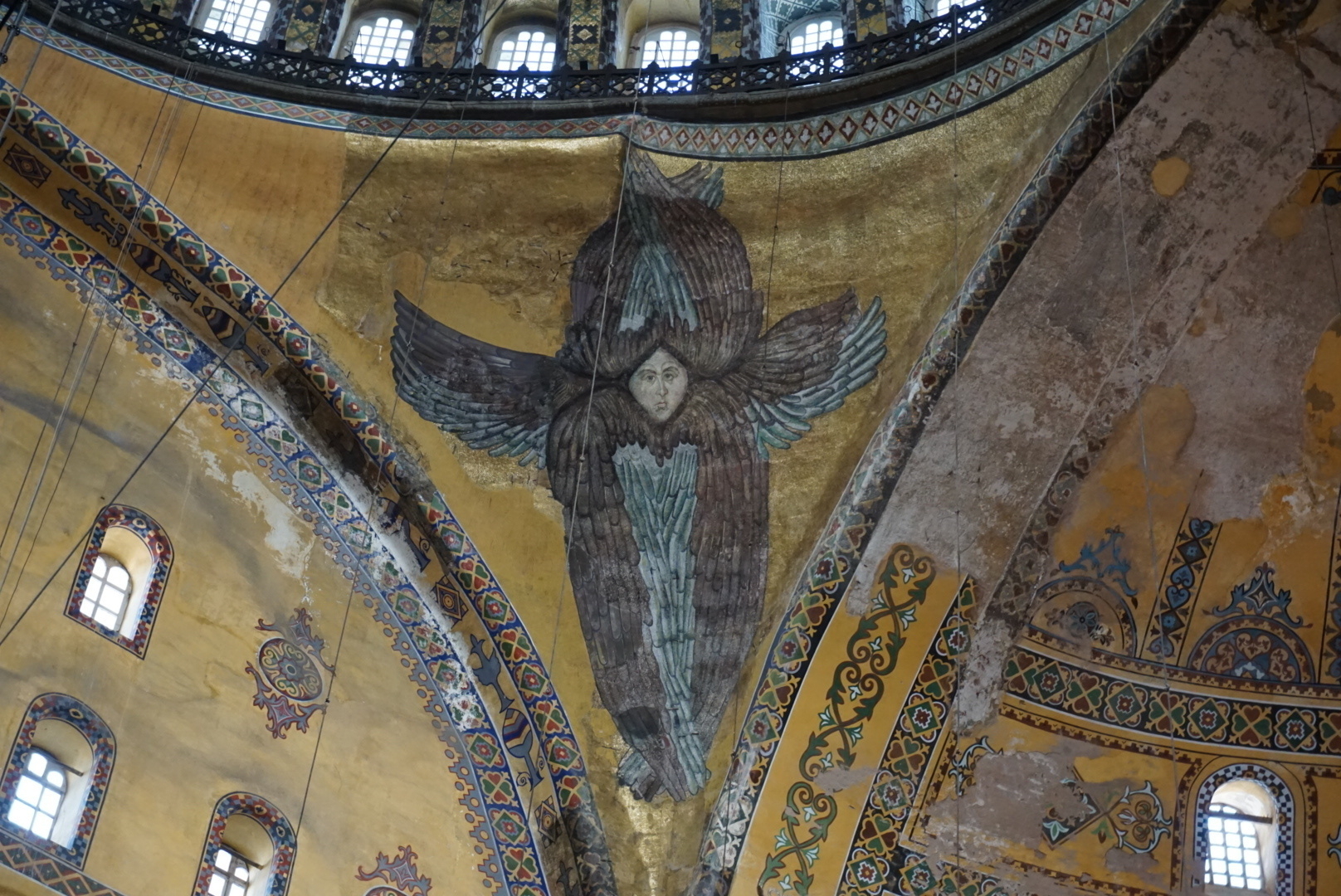 Notice that the only difference here is that the face was painted over with a symetric diamond shape. Some of the mosaics that they have begun to uncover and restore are really stunning. 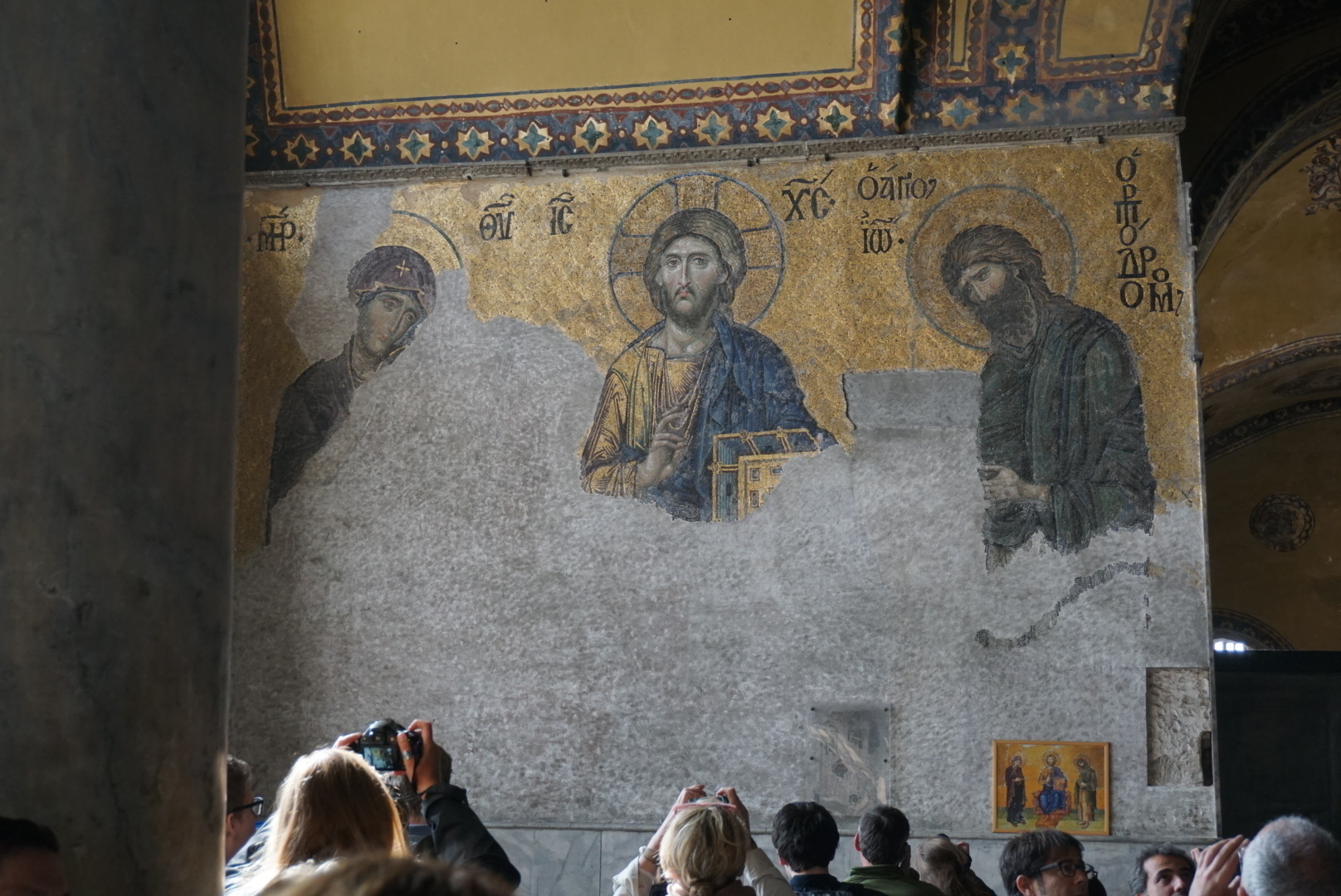 Finally, we visited the cistern under the basilica. You may remember this from James Bond, “To Russia with Love.” It is just this giant underground place that used to provide water to the city. But now, it is just stunning: 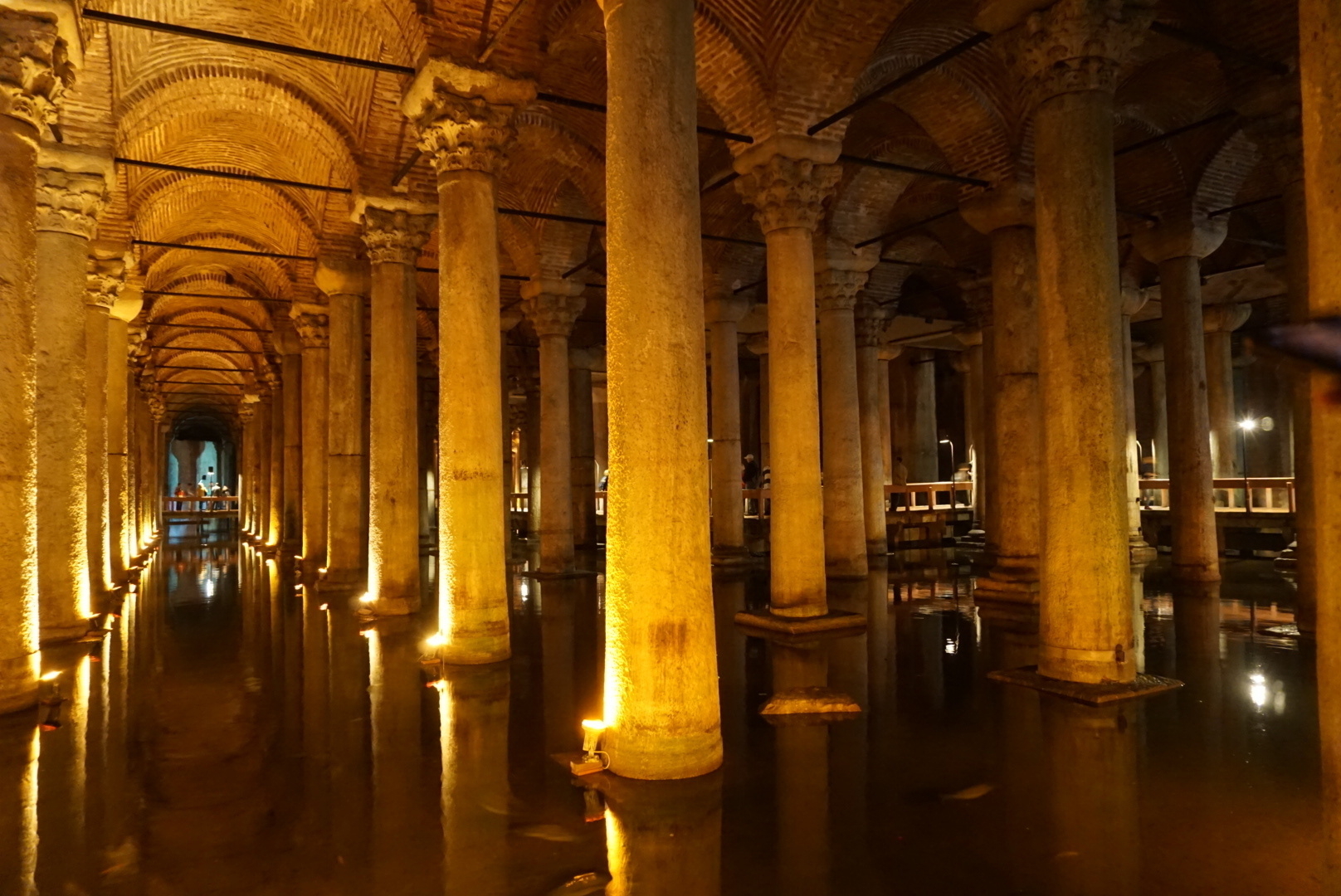 After all of that we headed back to the hotel for a short rest before we took the students out for a group dinner. We were all plenty exhausted after such an interesting day. Tomorrow, the Grand Bazaar, the Spice Market, and Taksim square.