We’ve just finished our morning stair workout. Four hundred thirty seven stairs to climb to the top of Ti Top island. The island was named by Ho Chi Minh, and a Russian astronaut. From the very top of this island you get a panoramic view of all of the junks and other nearby islands. What can you say about the views in one of the seven natural wonders of the world? Good Job selection committee! You can take all of the adjectives you can think of amazing, beautiful, breathtaking, romantic, peaceful and it still won’t do justice to what you see in Halong Bay. 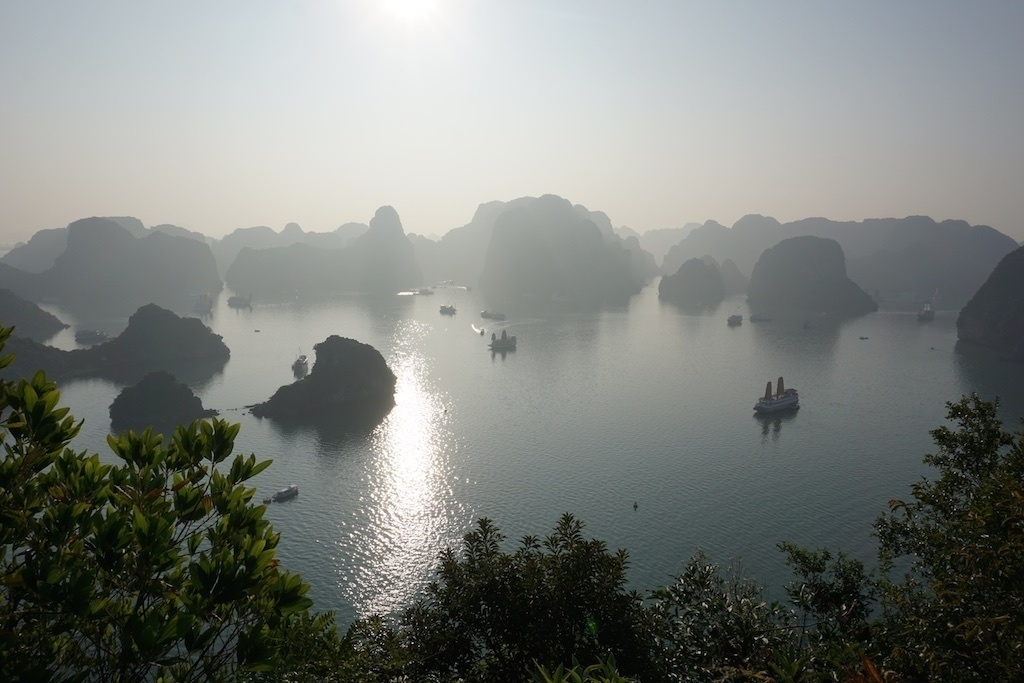 We boarded our Junk, Violet, around 1:00 p.m three days ago. Our cruise director, Tom (One of the few Vietnamese we’ve met that uses an American name), gave us a short safety demonstration, in place of the usual lifeboat drill. We were then shown to our suite. We were in the water suite, old creaky wooden floors, windows everywhere, and a TV we never turned on in one corner. The bathroom was larger than some American cruise ship staterooms we have stayed in. The balcony opened to the front of the boat. Our room was just above water level, with the window going all the way to the floor, so it was almost like living and sleeping right on top of the water. There are only six suites on the ship, this first night they are all occupied by four Americans, six Brazilians, and two Swiss honeymooners.

As we ate our lunch, and chatted with the other American couple the boat got underway. We really wished that we were not trapped in the dining room as it was our first exposure to the islands of Halong Bay. There are almost two thousand small islands in Halong Bay. The Limestone islands seem to jut straight out of the water and the sides are so steep that few are inhabited. Just for Mike, I will say that the geology of the bay is ancient karst (like Decorah!) Resulting from over 500 million years of sea regression, tectonic down-warping and sea transgression. Soon enough, we were done with lunch and up on the top deck to enjoy the scenery.

Later in the afternoon, we visited a floating village. The people live here year around. I heard others say that they live a very primitive existence, I think primitive is the wrong word. Simple would be a better choice in my opinion. They have some electricity, by means of a generator. They use it for charging their cell phones, and powering televisions and other appliances. Their diet, as you might expect, includes a lot of fish. Everything else, they have to get from the mainland and bring back by boat. Its a way of life they have chosen, and so they seem happy.

After the visit to the floating city we take our boat to the Tien Ong cave. Here we can see many freshwater mussel shells and some stalactites and stalagmites. We leave the cave just in time to get back to the boat to watch the sunset over the islands.

We are very glad that we signed up for a two night stay on the boat, as the second day gave us more time to enjoy the scenery and and do some biking and Kayaking. We left the Violet for most of the day, so that it could go back to port and drop off the one-night passengers, and pick up another group. As it turned out there was only one other couple, from Toronto, on the boat our second night.

While the Violet went back to port, we transferred to the Sunset with a couple from Perth Australia. We had a great time talking with them and touring Cat Ba island. We did a 6k bike ride to a small village where we were able to tour the village and learn about the endangered Langur monkey. Biking around the island gave us another perspective of the interior of the island which is equally as beautiful as the outside.

After our bike ride, we had lunch and then continued on to the Bat Cave where we were able to do some kayaking for about an hour. Kayaking in and out of small bays, and under the eroded limestone tunnels was a great experience. In one small bay we had hoped to see some monkeys, but they were shy, or on their own vacation so we did see them. After we returned to the Sunset, Ron and Jane were brave enough to do some swimming. I had dipped my hand in the water when we were kayaking and had long since decided against a swim. 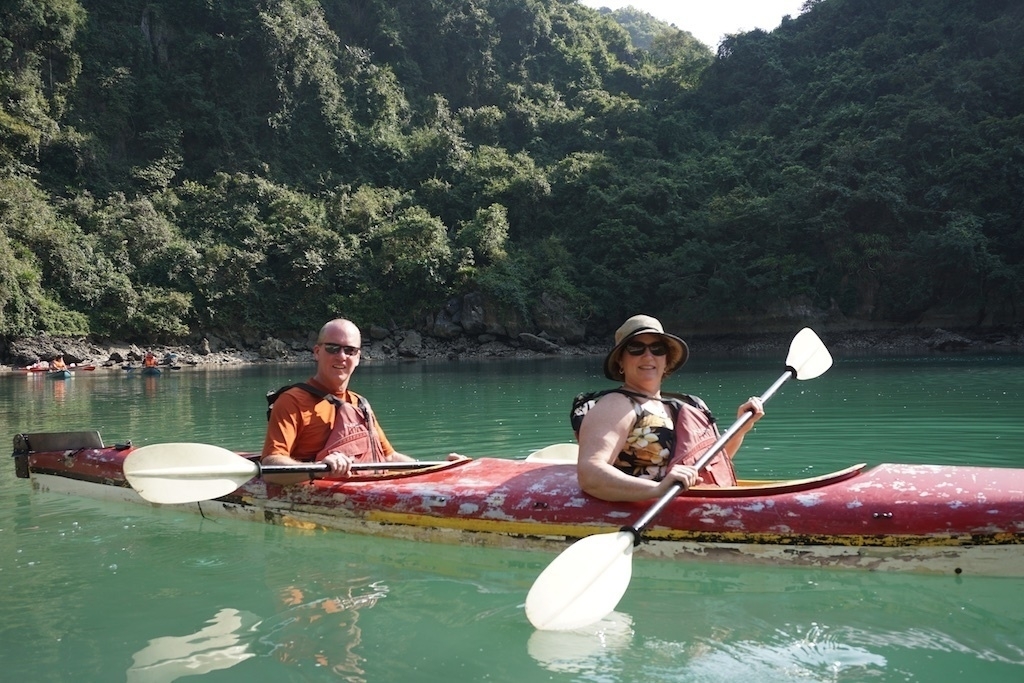 After an hour of relaxing -- our host on the Sunset was very big on that word -- we returned to the Violet for another great sunset, some wine, and a good meal. Having no internet we read and just enjoyed the quiet of the bay. Once all the boats are settled for the night it is incredibly quiet. All the engines are off and the lights from the other boats make for quite a romantic scene.

As we were having our breakfast this morning, on the way back to the mainland, Jane and I both agreed that Halong Bay was our number one experience of the trip so far. Its kind of sad to rank our experiences because it needlessly gives the impression that one experience is a winner, and others are somehow less. It really is the totality of everything we have done in the last 17 days that makes this such a great experience.