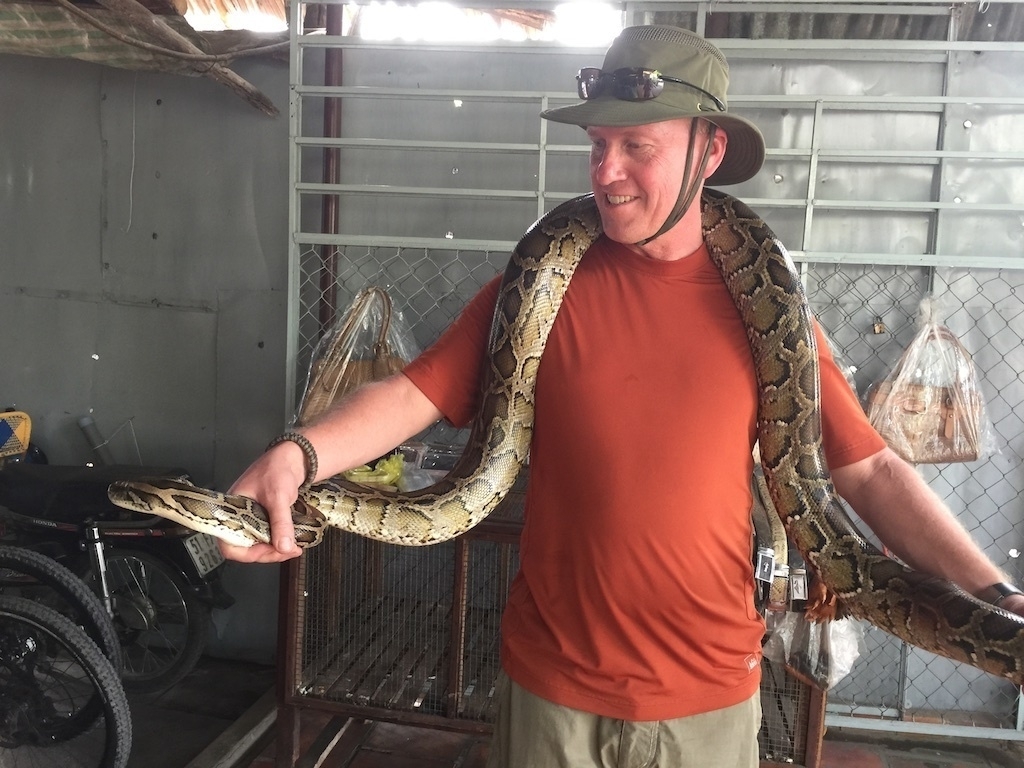 The picture pretty much sums up our experience here the last two days. We have both pushed ourselves outside our comfort zone, we have tried many new foods, and even took a sip of rice wine that had been marinating with cobra! Where do you go after a day like that?

Yesterday we left our hotel in the city and headed out to the Meekong Delta. This is an extremely fertile area where the Meekong river flows into the Sea. We started our day loading our bikes onto a boat and we headed up the river into the delta. 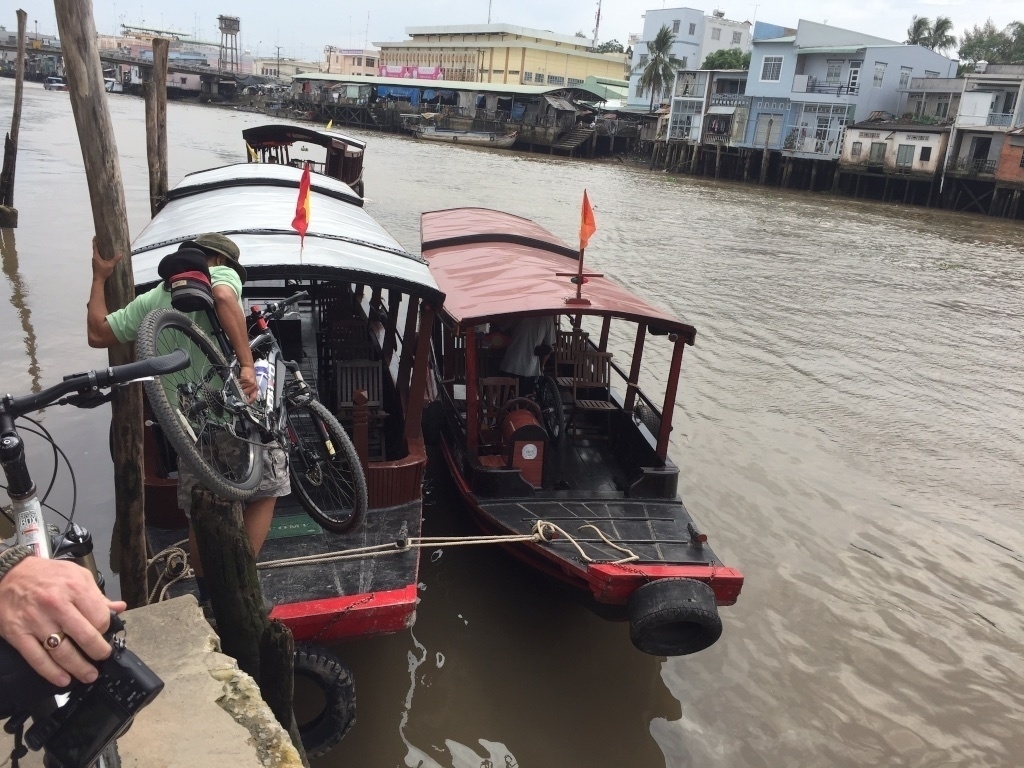 We made a stop along the way at a brick factory. It is such a step back in time, to visit a factory like this in Vietnam. We simply got off the boat and wandered around talking to a few of the workers. No badges required, no hard helmets, no insurance waivers. Its a pretty simple process, clay comes out of the river, and goes into a little hand operated machine that mikes the clay and extrudes the bricks. After drying on their own for a few weeks they eventually make it into a big kiln which is fired by rice husks.

We got off the boat, along with our bikes at another small factory, this time they were making all kinds of things out of coconuts. Coconut water, candy, coconut milk, shaved coconut. If it was possible to squeeze another product out of coconut they would find a way to do it. Before we set off on our bikes we had a whole plate of fruit to try. Including dipping your fresh pineapple into a mixture of salt and chile peppers -- delicious. I ate more fruit yesterday than I have in a year. Which isn’t saying much good about my diet, I know.

After an hour or so of biking through the tiny backroads of the delta we stopped for lunch. A great outdoor restaurant that basically appeared out of nowhere. One minute we were biking through the trees and the next we were pulling into a “neighborhood restaurant.” Our first course was fried spring rolls. Love em. Our second consisted of a whole Elephant Ear fish, fried and presented standup style for us. For you aquarium keepers this is also known as a Giant Gourami. I’ve had gouramis in my aquarium before, but I never thought I’d eat one. Anyway, we learned how to eat this by rolling the fish, along with some rice noodles and some pineapple and cucumber and mint, and basil in rice paper. The third course was a noodle soup which also had two giant prawns for us to try. Then came a course which consisted of a bowl of rice and some chicken curry. Of course by this time we were totally stuffed, and leaving all kinds of food on the table. So of course they have to bring dessert. Well, more fruit at least.

I honestly do not know how all of the vietnamese people stay so healthy and slim. From what I have observed in the last three days they eat insane quantities of food.

After lunch we do a bunch more biking, and then end up at our “homestay” house. This was the part of the trip that had me the most nervous. Honestly, I like my nice hotels, I’m really more of an introvert when it comes to meeting new people, so showing up at someone’s house in the middle of the delta, knowing in advance that the house did not have air conditioning, internet, or hot water seemed like a bad idea. But it all worked out. 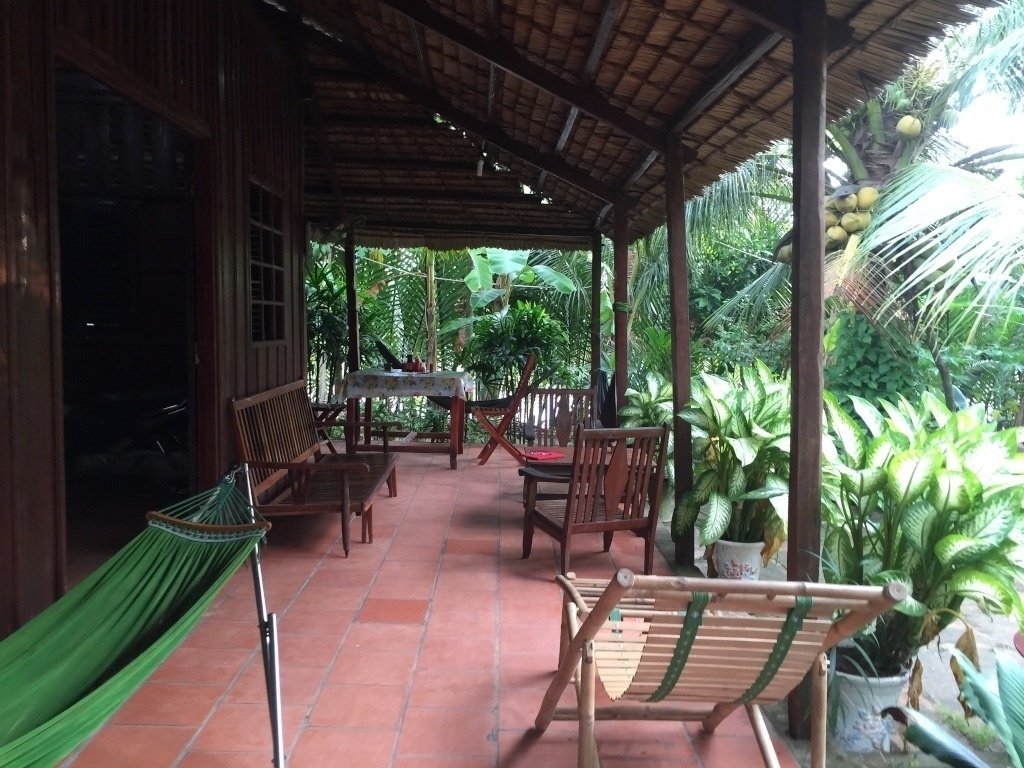 One of the great highlights of the evening was our spring roll lesson. Yep, in a real Vietnamese kitchen I got to learn first hand how to make one of my all time favorite foods. 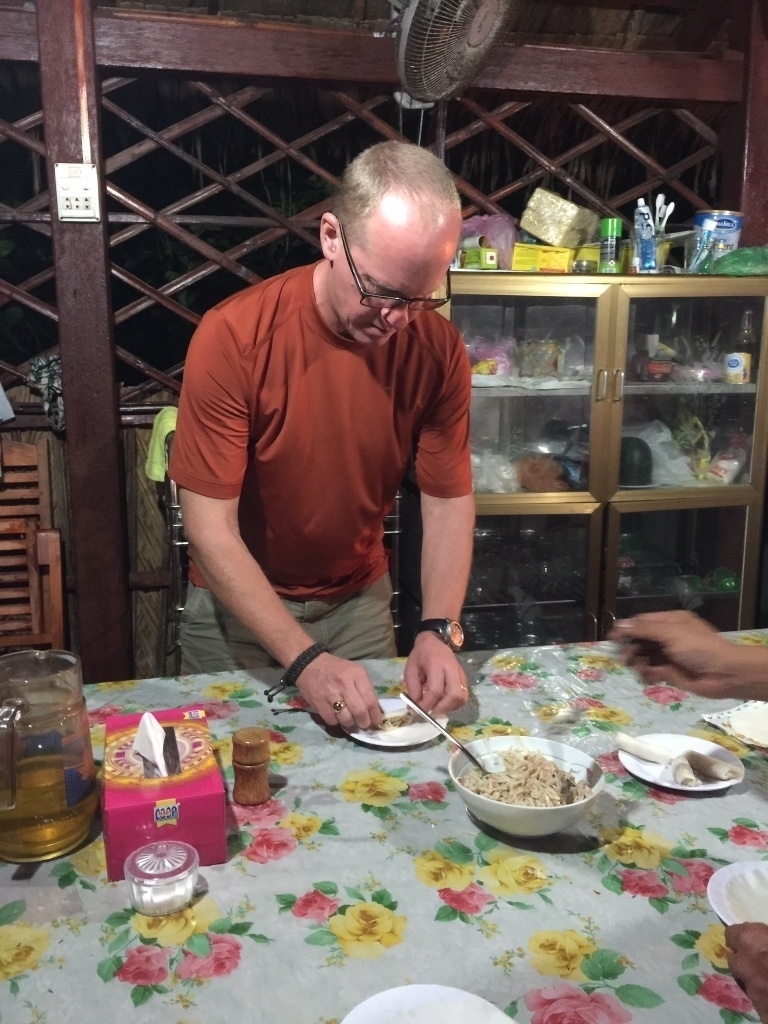 It was a pretty early night, and as it turned out pretty sleepless as well. We were hot, and our mattress was pretty hard, “softer than cement” according to Jane. So it was early to bed early to rise. We had a quick breakfast, and then biked to the local market. In the delta, locally grown is not a “movement,” it is a way of life, and has been for years. The pork that is sold fresh at the market was butchered just hours ago, and it will all be consumed before the day is out. Fish, eel, frogs, etc. are all still alive and swimming when you get there, when you pick out what you want they will fillet them for you. It was all caught today, and it will all be eaten today. The produce is a similar story with more kinds of fruits and vegetables available than I can even think about. 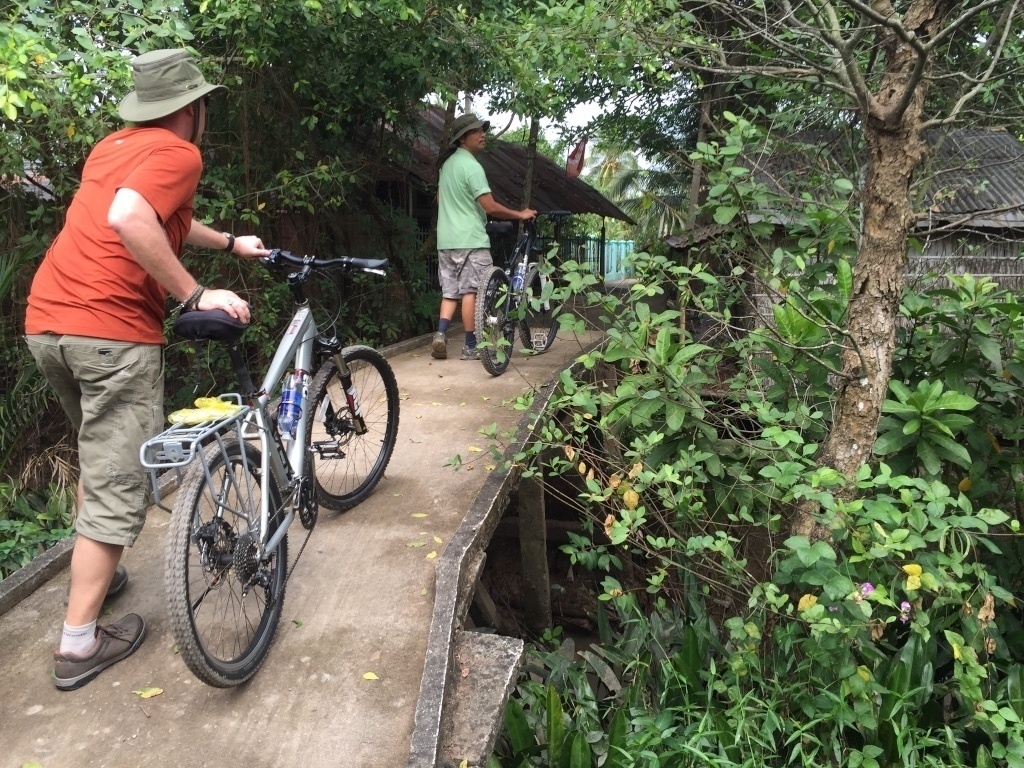 After the local market we meet up with our driver again, and we head somewhere else on the delta to visit the Cai Be floating market. This is similar to the local market but here things come, by boat, from further away. Each boat sells its specialty, and you can tell what they are selling because they have it flying from a flagpole on the boat!

Here is where things take a turn for the weird. It seems that Long has decided we need to be challenged. So after we get off the boat and bike for a few feet, he stops and says he wants to show us “how they make honey” OK, fine we get to see a beehive, but thats not enough, as he wants me to hold it. There must be a thousand bees on this thing and he wants me to just stay calm and hold the thing.

That turned out to be easy compared to the next lesson: a big jar, whats in the jar? Looks like snakes to me. Gross. Have I mentioned my lifelong fear of snakes? OK, so its a jar full of rice wine and snakes. Lets see what kind of snake? Oooooh a Cobra, glad its dead and pickled. Glad he didn’t tell me they were lurking around on the delta until now. Lets have a toast shall we? Um, really? you want me to drink rice wine that has been marinating a dead cobra? Fine. Well, it mostly tasted like strong rice wine, but apparently I’m going to be stronger tomorrow. Yes, just in case you were wondering, they do have a similar variety featuring a scorpion. 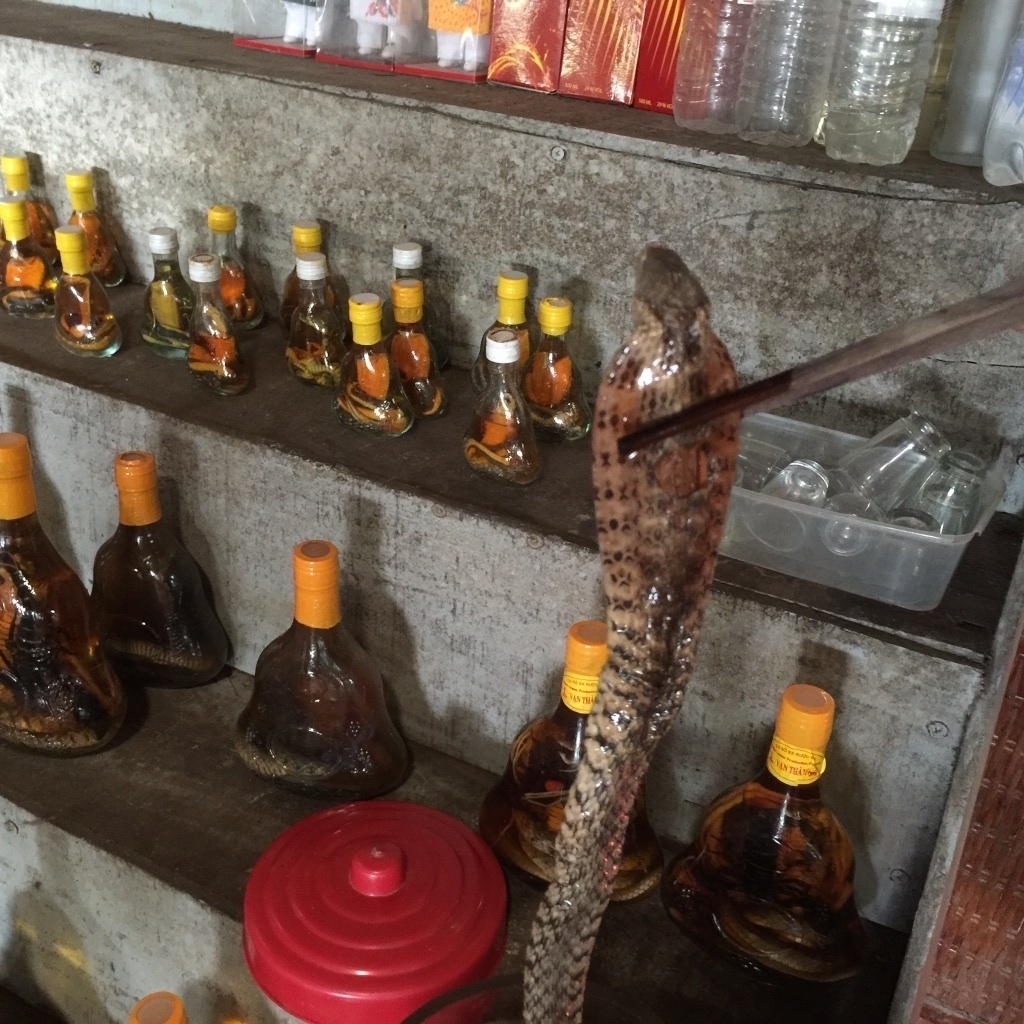 Which brings us to the giant Python. After pulling it out of its cage, and informing us that it is not poisonous, but does bite. He says, ok Brad, your turn. Really! I can assure you that holding a giant Python has never been on my list of things I want to try. I can also assure you that I had not consumed enough rice wine and cobra to give me the courage to do this. But, something deep inside me said, if you are going to teach Python you ought to have a picture of yourself holding a giant one. So there you have it. More on the Meekong Delta later.