Ten Thousand Things you can Haul on a Motorbike

Ten Thousand Things you can Haul on a Motorbike

To say that there is a motorbike culture here in Saigon is a bit of an understatement. The population of Saigon is around seven million people and there are about four million motorbikes. Today we got to be a part of it all.

I’ll spare you the details of our journey to get here, suffice to say that we started by leaving our hotel in Bloomington, MN at 5AM on New Years Day, and we arrived at our hotel in Saigon at 1:05AM on January 3rd. All of the first and second were a spent in airports on or on planes. I’m just going to say one time how happy we were to use our American frequent flier miles to upgrade to business class. Although we may be spoiled for life, and never travel any other way again.

Today was our first day of touring with Long, our Saigon guide. Our tour itinerary said that we were going to have a cultural and culinary experience by motorbike. For some reason I had a vision in my head of Jane and I sitting side by side in some kind of three wheel arrangement with the driver in front of us. This was not the case.

When we met Long this morning in the hotel lobby, he immediately brought us outside and introduced us to his assistant! Now there are four of us, my vision for the day was changing rapidly. In the end, we each got a helmet, and hopped on the motor cycle behind them. Off we went. 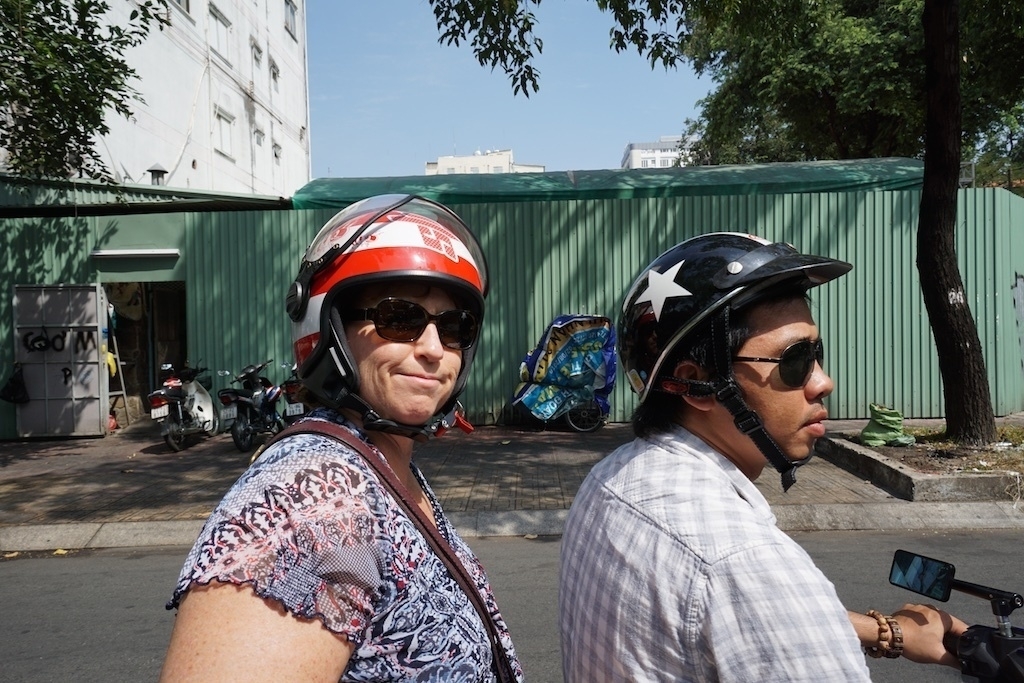 Our first stops of the day were the post office, the Catholic cathedral, the Reunification Palace, and the war museum. I’m still trying to process the war museum, so a post about that will have to wait. Then lunch at a traditional family Pho restaurant. Beef noodle soup and spring rolls. Yum.

For me the day really got fun when we just toured through the markets on the motorbikes. We drove down hundreds of narrow streets that no car or tour bus would ever venture down, and we noticed that there is almost nothing you can not carry on the back of a motorbike. The first thing that caused me to do a double take was a motorbike carrying 50 bags of goldfish! Then I noticed the man with five 20 liter water bottles balanced. Next was big plastic tub full of live lobster. The gallery below has some of our favorites.

Now I know some of you are wondering about our sanity. Arriving in a big city and jumping on the back of a motorbike for a day of touring. I have to say that I felt like I was not totally safe the entire time. There is something very interesting about sitting knee to knee with a stranger at a stoplight in a new city that makes you feel like you are getting to know the people.

Turning left at a busy intersection is a somewhat intricate dance. The first thing you do is get in the left lane and drive straight at the oncoming traffic, which magically veers around you as if you were not even there. Then when you turn left you can do it at almost any time. My preferred time is when the bus in front of you also turns left and acts as a giant shield. But it turns out that oncoming traffic slows, and traffic coming from the right also makes way and suddenly you are just going left. Its kind of like they can all read each others minds and just know when to slow down, when to speed up, and when to merge. I have some suspicion that this is accomplished by a secret code that is communicated by honking your horn, but I have yet to break the code.

I keep thinking to myself how this would never work in America. Someone would surely run into someone else just to prove the point that they had the right of way. A day on one corner of riding like this in America would surely beget a thousand lawsuits.

Here’s an inadvertent selfie I got as I was taking a photo as we were driving down the street. 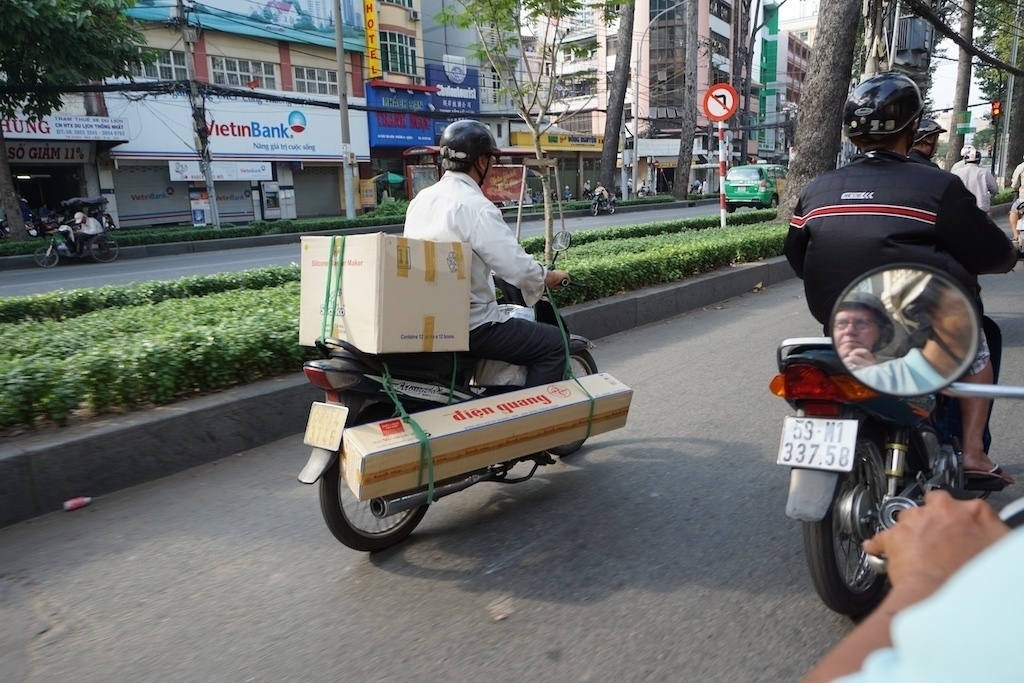 The marketplaces we visited are just mind boggling. Street after street of motorbike parts, electronics, cookware, you name it. At one stall there were hundreds and hundreds of television remotes. If you need a replacement, and can find this stall I’m sure they would have just what you need. I’m not sure how this economy works. It seems like total chaos to me, but it was clear that people were doing business. Orders were taken, things were being welded or cut, and things were delivered.

In the food marketplace there were thousands of stalls. Everything was jammed so close together you could hardly walk down the aisles. The merchants must show about about 5am every morning to lay out their wares, and then put everything away again at the end of the night. Some stalls are so specialized you can’t imagine that they could possibly make it, but there they are, taking orders on their phones, doing their books, and scooping out things to deliver.

At the end of the day we sent off two more loaded down motorbikes. Our guides took off carrying our large suitcases. We had planned to travel light for the rest of our time in Vietnam, and so we will catch up with our bags in Cambodia. 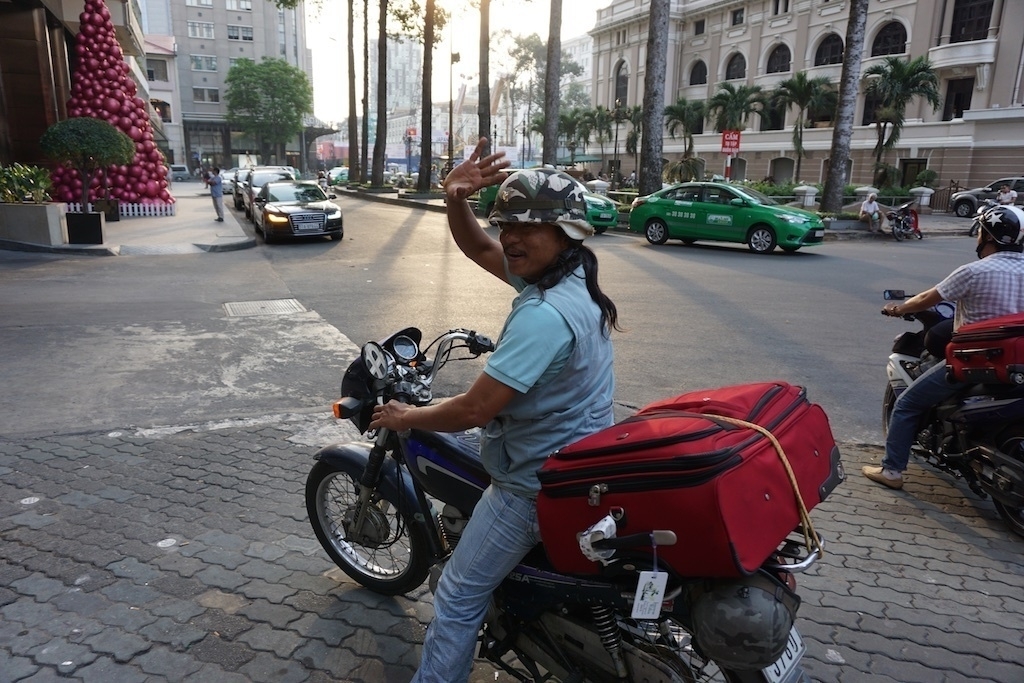