on the high seas

We are sitting here having our morning coffee and hot chocolate watching the waves crash and roll.  We left the Straits of Magellan sometime in the middle of the night and entered the Pacific Ocean, where we have high winds and, as the captain says, “Big Waves.”  I took some video looking out our window, but I’m not sure you can get the real sense of how much we are rocking and rolling.  I’ll post the video when we have a faster internet connection.  Meanwhile I just walked down the stairs to the Cova Cafe to get some of their great little croissants for breakfast, and I noticed that the crew has strategically placed barf bags along the stairwells and in other places.  According to the captain, who just updated us, we are experiencing winds at 50-60 knots with gusts of 70 knots.  In addition the waves are 15-20 feet high.

I just got back from the workout room.  walking up the stairs was quite an adventure.  At times I felt like I was floating up two to three stairs at a time, and at other times, I felt like I was carrying an elephant on my back as I was trying to go up a single stair.  Bootcamp was postponed this morning due to the high seas.  I decided to go ahead on run on the elliptical, which was kind of fun with all the dipping and plunging the ship was doing.

We will be at sea today, and tomorrow, although later today and all of tomorrow we will be cruising through the Chilean Fjords. The Fjords will be much calmer than the open ocean.  I’m not sure whether or not to even attempt to go to bootcamp workout in these high waves.

Yesterday we were in Punta Arenas.  It was our first stop in Chile.  We did not do any kind of excursion or tour.  We just took the tender to shore and walked around the town a bit.  There was a nice park square with trees, and a statue of Magellan, and handicrafts.  Apparently you are supposed to kiss the toe of Magellan and you will come back again, but with the crew having you sanitize your hands every five minutes, I can’t imagine why anyone would want to kiss the toe of a statue and share the germs of a hundred other travelers that way!

While we were in town we found an internet cafe, where for the price of a cup of coffee we could get all the free internet we wanted.  It was nice to have some high speed internet for a change.

We just got back from a tour of the bridge.  It was very interesting and one of the officers confirmed that the wind was very strong this morning.  He said the maximum gust was 99 knots.  Thats about 113 mph for you non-nautical types.  So what do you do when you have a twelve story floating building and the wind is blowing against one side of the building at 113 mph?  Several things, it turns out.  The ship has stabilizers that can be deployed to counteract the forces of the wind.  These protrude out of the ship under the water at an angle like long wings that are under the water.  In addition there is water ballast that can be pumped from one side of the ship to the other to counteract the wind and the seas.  So when you consider that we had a strong current, 15 foot waves, and strong winds gusting to over 100 mph its amazing how little rocking and rolling the ship actually did.

Here are a couple of photos I snapped while we were on the bridge: 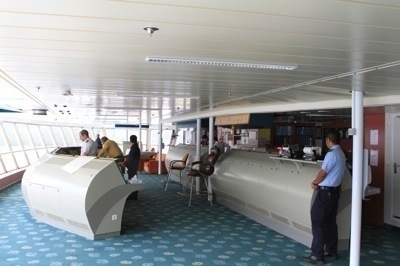 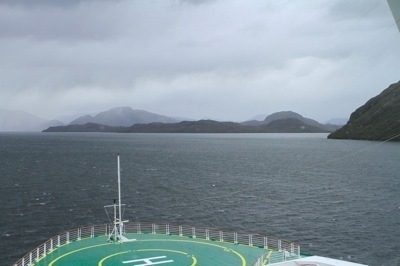 Since we are back we are also getting ready to host a little party in our room for some of the people we’ve met on board.  The party will start here, and then we’ll also visit some of the rooms and suites that others have.  This is a great way to see what kind of room you might like to have the next time you come on board.  Here’s a shot that I took on the balcony of our friends Jonathan and Nancy. 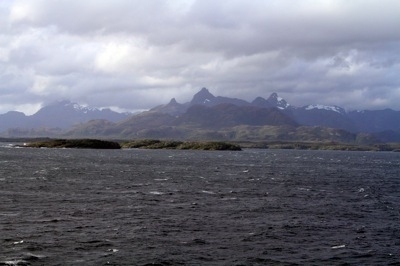