Ushuaia is the southernmost city in the world.  It is in the Patagonia region, and the Tierra Del Fuego province of Argentina.  Thats a lot of geographical trivia for you in one statement.  Another fun fact about Ushuaia is that the Pan American Highway comes to an end here.  You can see Jane and I standing by the sign marking the southern end of the highway.  It doesn’t look like much of a highway at this point since it is gravel, but nevertheless you could get on this road and start riding and 17,848 km later you would find yourself in Alaska.  Now that would be a bike ride. 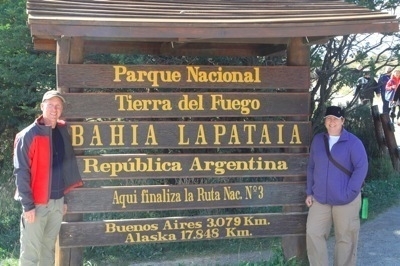 Although Ushuaia is the southernmost city in the world we are not as far south as you might imagine our latitude is only as far south as Washington DC is north, so there are no issues with permafrost or any of the other problems that plague the far north cities.  Interestingly though, there are glaciers very near the city, and we cruised by them and hiked near them today.  Ushuaia is located on the Beagle channel.  This is the channel that the famous ship carrying Charles Darwin discovered.

Our day in Ushuaia was full of hiking with people we’ve met from Cruise Critic.  There were 11 of us that had joined in a private tour with Christine and Craig from Australia.  Our driver and guide, Edgar, was very pleasant, and knowledgeable.  He stayed awake the entire trip!  He hiked with us and pointed out interesting plants and things along the way.  Our main hiking was in the Tierra del Fuego National Park.  Here are a couple of photos to give you an idea of how pretty it was.  Jane and I are going to try to find an Internet Cafe in Punta Arenas so hopefully with some speedier connectivity I can get some larger versions uploaded to Flickr. 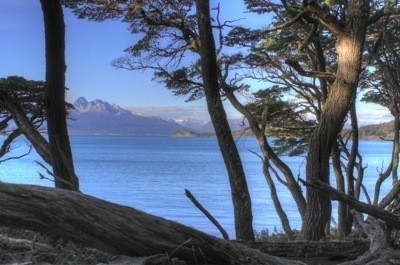 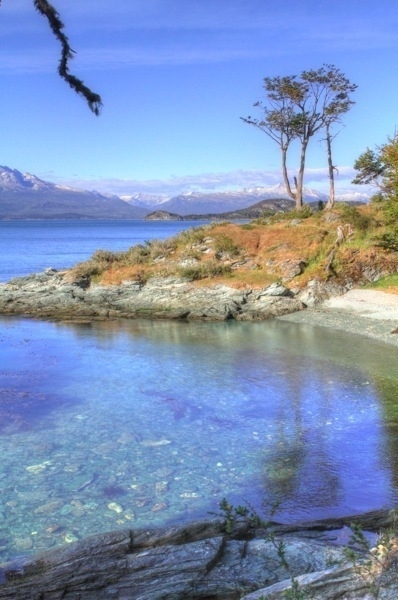 One of the interesting things I discovered on the hike was how similar this area is compared to northern minnesota.  Its striking how the effects of the glaciers leave exactly the same marks even though we are in completely different parts of the world.  In some places you would think you were on the shores of lake superior instead of standing next to the Beagle Channel.

After hiking in the national park all morning, we got in the van and drove to the ski area above the city.  Here we were able to take a ski lift up the mountain to another hiking area.  If we had more time we could have continued to hike up the mountain to the glacier.  Sadly, the hike was too long and we didn’t want to miss the ship!  While we were doing a short hike at the top of the lift we were lucky enough to see an Albatross soaring in the sky.  These birds are huge, with wingspans of up to 3.5 meters!  Sadly it was too far away to get a decent picture.

Here’s a shot of the view on the way down the ski lift. 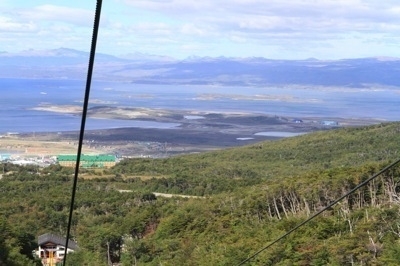 And here you can see our ship on the pier with the city in the foreground. 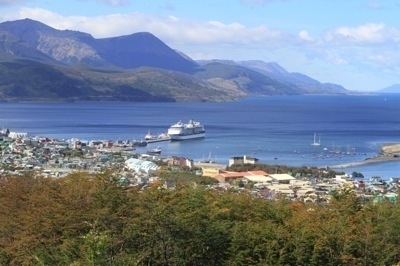 So far I would say that Ushuaia is my favorite city of the cruise.