The city of Punta Del Este has about 10,000 regular inhabitants, even though when you look at the picture of it you could easily imagine that it hosts ten times that number.  This is because Punta Del Este is a huge vacation getaway for much of South America.  All of the apartments in the high rise buildings are vacation homes.  Punta Del Este itself is mostly situated on a big peninsula with beaches on both sides.  The beaches on the west side are at the Platta river, the same one that starts in Brazil and flows through the Tigre Eelta north of Buenos Aires.  The beaches on the east are on the Atlantic ocean, and you can see the fresh and salt water mix together off the tip of the peninsula.

We didn’t have anything in particular planed for our day in Punta del Este, so we just took the tender ashore with the idea that we would walk around and check things out.  However when we got off the ship and started our walk through town, there it was, Bike Tours!  One lone woman holding a bike tour sign, of course we had to check it out.  Her name was Alice and she said she could take us on a two hour tour of the city, tell us about the history and highlights of the area, and of course we would do it all on bike.  Yay!  The price was very reasonable too, so here’s my digital shout-out to Bike Tours Uruguay Its a great way to see the town, and Alice even has other longer tours that will take you north into some of the other outlying areas.

After we got our bikes, helmets, and water our first stop was the most famous work of art in Punta del Este.  The “hand in the sand”  This was a sculpture that won a big art contest sponsored by the city back in the mid 1980’s.  It is literally a giant stone hand coming out of the sand on the beach.  Here’s Jane and I in front of the middle finger. 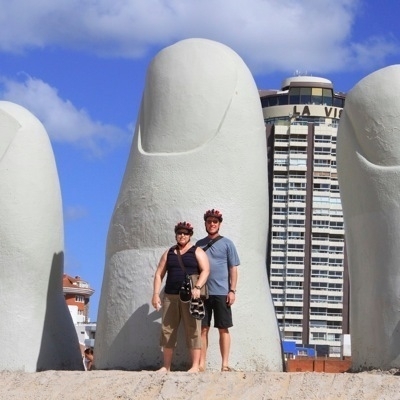 We continued our tour down the atlantic side enjoying the sites and sounds of the beaches.  The picture at the top is taken looking north back up the beach.  When you get to the point of the peninsula there is an observation deck to go out on, where you can enjoy the view looking back up the river as well as out to sea.  On the atlantic side there is an island where many hundreds of sea lions live, that is another tour for another day…  Some of our dinner table mates took that tour and said it was fun but pretty smelly when you get in amongst all of the sea lions.

When we got to the point our guide pointed out the island, and a small marker right off the point, and then another landmark off the the west.  According to the guide there is a large but rather narrow triangle  described by these three points.

Within this triangle is one of the places on earth that has amazing energy.  Oops, now I’m thinking what kind of strange new age mumbo jumbo guide did we get ourselves mixed up with.  But stay with me for a minute.   This triangle also encompasses the Punta del Este lighthouse, seen below.

Now, right next to the lighthouse is a little park area with a compass rose made out of stone.  You can see Jane standing on the compass rose facing south. 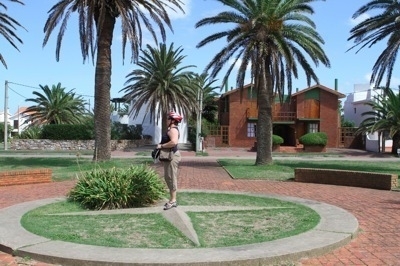 Here’s the remarkable thing.  When you stand on the center of the compass rose and begin to speak you experience something really amazing.  Its like your voice echos inside your head in a really strong resonant way.  When our guide told us about this I was extremely skeptical.  I could just hear her telling me,  ”What you couldn’t feel it?  Its so strong I can’t believe you didn’t experience the power….”  But when I stood there and started talking it was amazing.  I’m not sure what causes it, but I did do some googling and apparently there are some strong magnetic forces that converge in the Punta del Este area that have been scientifically investigated.  When I get home I’m going to have to do some more research to see if I can figure out what might cause this internal acoustic effect.  (unless of course Mike has it figured out for me first)  If you have any theories of your own, please leave them in the comments!

We continued to bike around the peninsula, and up the river side.  We stopped at the fish market to see some sea lions, getting a late lunch, and from there we also had a great view of our ship as seen through many of the ships in the marina. 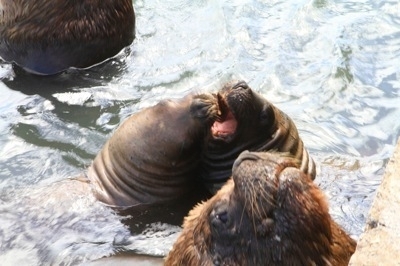 Sea Lions at the fish market 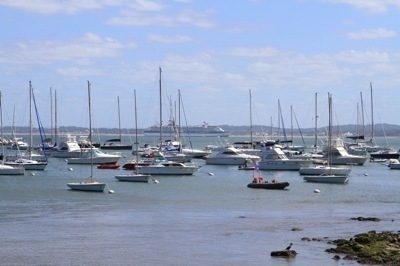 For a day where we had absolutely nothing planned this turned out to be a great adventure.  Seeing a city by bike is great, it gives you a good perspective and allows you to see the sites from outside, rather than being stuck inside a car or van.

Today we are at sea the whole day, on our way to Puerto Madryn.  There are lots of activities scheduled, and lots of time for reading and relaxing today.  We are looking forward to a nice quiet day – After we go to our first boot camp workout!  The ship is also hosting a get together for all of the people on the Cruise Critic message boards, so that will also be a chance to meet some people in person that we have only communicated with electronically.  So, goodbye for now, I’ll give you an update in a couple of days when we are through Puerto Madryn.