we will rock you

Yesterday was another great day in London.  We started out at 8:00 with our daily discussion of the assigned reading.  24 of the 26 members of the class were a little unhappy about the 8:00 starting time, but the other two (Craig and I) wanted to get them up and out of bed so they would have the middle part of the day for seeing the sites of London.  This would really be the first extended time they would have since we arrived for doing some touring on their own.

We met up again at 4:00 at a place called the View Tube.  This is an educational facility that overlooks the Olympic stadium and Village area.  We met with an architect who is the project manager for the Olympic Village.  It was an absolutely fascinating meeting.  How do you design a village to house 10,000 athletes that will be turned into market housing as well as affordable housing once the games are over?  Furthermore how do you build all of this to the latest green standards?  How do you design a new city neighborhood, with safety and security as primary design constraints?  How do you move millions of people in and out of this neighborhood on a daily basis?  These are just some of the design goals for the Olympic Village and park area.  Here are a couple of pictures of the stadium and the aquatic center in construction: 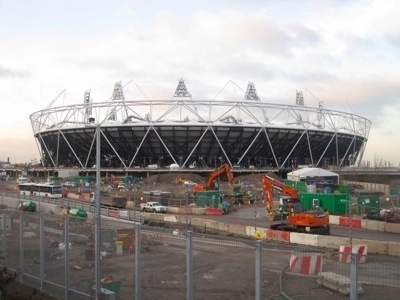 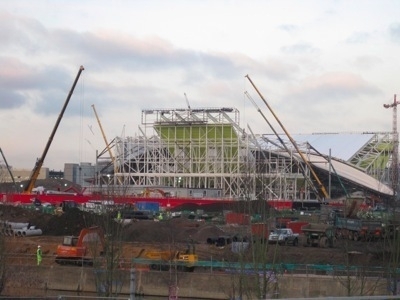 The apartments that house the athletes during the games are all built without kitchens and other ‘extra’ rooms to provide extra bedroom space.  After the games the kitchens are added before they go on sale.  We also learned that all of these apartments are designed and built so that they do not need heating during the winter!  This is amazing to me, but we were further told that they didn’t think they could sell them without heat, so in floor heating is added throughout.  The water for the in-floor heat comes from a central facility, so should it ever be needed it is extremely efficient!

This project really is amazing, the amount of social and civic engineering that has gone into the design of the village really boggles my mind.  Not only that but consider that much of this was designed, and even some construction was started before the economic crash in 2008.  The crash led to a full time out to re-evaluate and re-finance much of the operation.  Its just amazing that they are going to pull this off.

After our meeting at the View Tube, we all scattered for dinner on our own and then met up again at the Dominion Theater for We Will Rock You.  This is a musical where the plot and characters are loosely based around the Bohemian Rhapsody .  Lots of great Queen songs that we all wanted to sing along with.  Craig and I had our dinner at the Tottenham Pub, and I decided that I really needed to try a meat pie during my stay in London, so I had a chicken and mushroom pie for supper.  I was pleasantly surprised by how good it was.