After the rain and dreary weather of the past many days it was delightful to get up this morning and head outside to see the sun.  The early part of the morning is free, so my plan was to go pick up our tickets to We Will Rock You, but the box office did not open until noon.  It was a productive walk anyway as I found a free WiFi connection that was 10 times faster than the Royal National and that allowed me to finish downloading the London2Go app for my iTouch.  Its a nice app that works off line and has all of the london highlights, plus tube information, and a map.  All of this works great even without WiFi so its very handy to have in your pocket when you are walking around or on the train.

At 10:30 we gathered for a trip down to Wimbledon.  First on the agenda for the day was a walking tour of the stadium.  It was fantastic.  Everything you would expect from Wimbledon.  Of course at this time of year the place is pretty quiet except for the workers who are already at work preparing the stadium for the Championship at the end of June.  Much of this enormous complex is only used for a couple of weeks during the year.  There are courts that the members are allowed to use, but not the competition courts.

Our guide told us the story of how the week after the tournament, the process begins to prepare the courts for the next year. 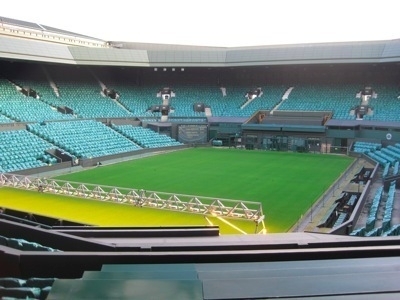 Finally, testing begins.  A person comes in and literally counts the blades of grass per square meter to make sure the turf is the right density, and that the tennis ball will bounce to the correct height. when dropped from a test machine.

We also got to go in the press room, and sit in the chairs where the players come every day to give their interviews.  It was fun to sit in the same chair as Nadal, Federer, and MacEnroe.

We were allowed to sit in the stands on court 1 as well as Centre Court, so we got a good idea of how intimate the Wimbledon stadiums are and what it would be like to actually attend a match.  After the stadium tour we had a marketing presentation and learned a little about the way they market the stadium and the museum during the other 50 weeks of the year.  All in all it was an impressive experience.